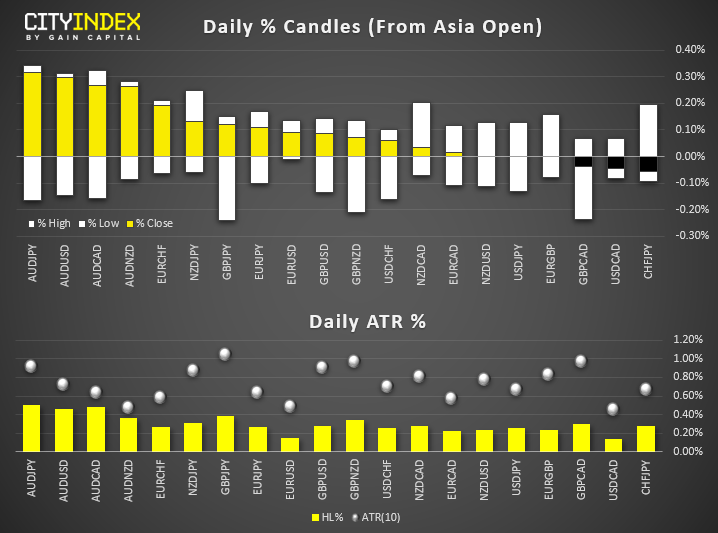 It was a narrow-ranged day for currency markets, although AUD and GBP are the strongest majors, CHF is the weakest. The US dollar index (DXY) remains stuck near yesterday’s low and shows potential to break lower if a partial trade deal can be struck between US and China today (or bounce if no deal is made).

AUD/USD touched a 2-week high, EUR/USD is resting in a small range above 1.10, and USD/JPY touched a 6-session high.

The former ambassador to Ukraine is expected to testify later today to the House of Representatives investigators. 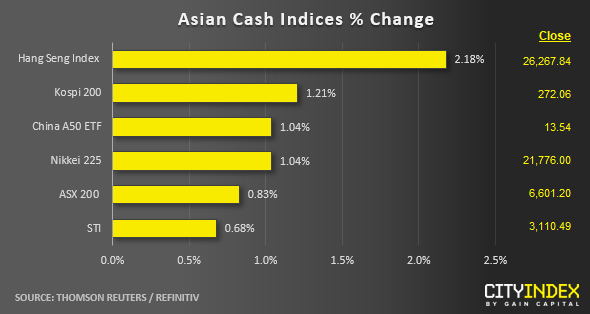 Key Asian stock market have gapped up in today’s Asian session and almost reached their respective 5-day highs on the backdrop of a promising U.S-China trade negotiation talk that has concluded its first day and the second day of talk will proceed as scheduled today.

Market participants have now been “guided” towards a potential “partial trade deal that includes a currency pact with China” to be concluded today by a series of U.S President Trump’s tweets that includes a meeting with the highest ranking official from the Chinese delegate, Vice-Premier Liu He at the White House. Thus, the “bar” has been set high on the positive side and any disappointment towards the end of today’s talk or negative outburst from President Trump’s tweets can easily reverse the current gains.

The S&P E-Mini futures has continued inch higher by 0.42% in today’s Asian session to print a current intraday high of 2956, just below the 2960 level that has stalled the previous up move seen last week.

Day 2 of U.S-China trade talk where its conclusion will set the tone for the market in the next few weeks. Things to look out; if there is a currency pact signed, what are the exact terms and how such pact is to be enforced. A partial deal with what kind of strings attached; how long U.S. will delay the next tranche of tariffs on Chinese imports and will China be willing to give up its industrial policy that subsides the SOEs (state owned enterprises), one of the major requirements that U.S demands from China in order to break the impasse for a full trade deal.

Germany CPI for Sep where market is expecting similar growth rate from last month; 0.9% y/y and -0.1% m/m. If inflation numbers disappoint, the EUR/USD may see some downside pressure to retrace yesterday’s gains. 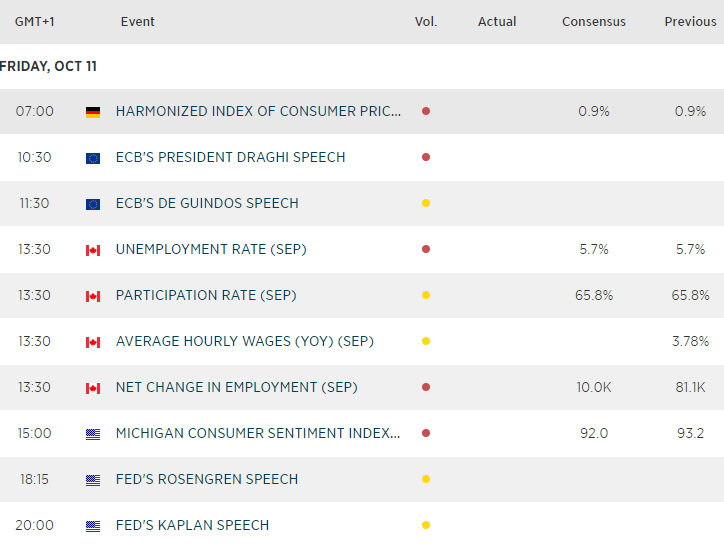