$1.7 trillion through six months. How much more to go?

Data released last week showed the federal budget deficit totaled $1.7 trillion through the first half of fiscal year (FY) 2021, which ends on September 30. Although this is a huge sum, it is a bit smaller than we originally anticipated, and we are revising our federal budget deficit forecast for FY 2021 modestly lower to $3.2 trillion from $3.5 trillion.

Over the next few months, the federal budget deficit will remain elevated as the spending from the American Rescue Plan continues to flow and the economy recovers. But, some spending has already gone out the door. For example, about 90% of the direct checks to households have been sent. And other funding tied to COVID testing, contact tracing, disaster relief, and other similar areas may not be fully spent if the public health situation continues to improve. Furthermore, the tax filing deadline in May should lead to a robust pace of tax collections in the month, and the rapid acceleration in economic activity and hiring we expect in the months ahead should lead to a marked increase in federal tax collections more broadly.

Ultimately, we expect this year's budget deficit to be about $3.2trillion, nearly identical to the $3.1 trillion gaps in FY 2020. Over the medium term, however, we expect the federal budget deficit to narrow significantly. This is due to both the robust rebound in the economy and the one-off nature of most of the COVID relief spending. Yes, deficits have been large since COVID began, but they have been driven predominantly by one-off items, like direct checks to households, grants to state and local governments, and enhanced unemployment benefits rather than permanent tax increases or spending cuts.

If the economy improves in line with our expectations and no major new spending/tax cut initiatives are undertaken, we project the FY2022 federal budget deficit as a share of GDP would be roughly5.4%, not all that much higher than the 4.6% that prevailed in FY2019 (Figure 2). The Biden administration is considering additional changes to tax and spend policies that, if enacted, could push the deficit higher in FY 2022 and beyond. But even if enacted in full, the deficit impact from these proposed changes would likely be much smaller than previous COVID relief bills, and as a result, we believe we are probably at the peak budget deficit of the cycle. 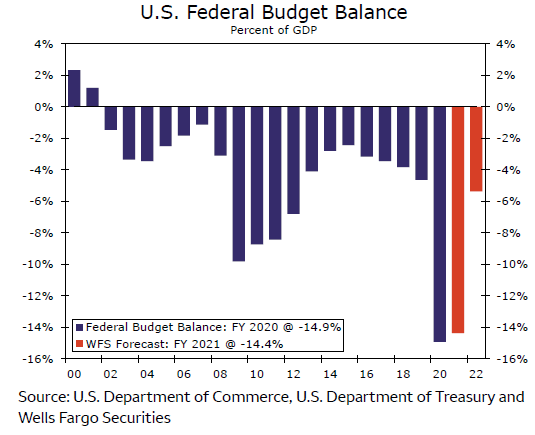 Next week, the Bureau of Economic Analysis will release the initialfigures for Q1-2021 GDP in the United States, and those figures will likely show a major jump in government output. Some of this can be attributed to the recent pickup in hiring among state and local governments and the federal government's ongoing role in fighting the pandemic. Most of the increase, however, can be attributed to the way the Paycheck Protection Program (PPP) is accounted for in the GDP accounts. When a PPP loan is originated, the federal government pays the originating bank a fee. While the loan itself does not count as government output, the fee does count as the BEA considers this “consumption” by the federal government. Thus far in 2021, the PPP has seen about $240 billion of net loans approved for small businesses. 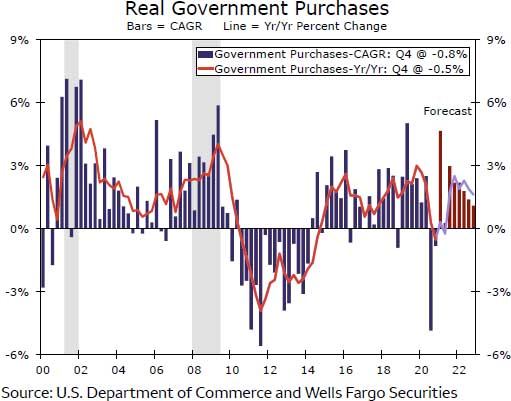