S&P 500 shook off another record making inflation reading, and bond markets couldn‘t be happier. Volatility is back down, but the option traders turned cautious – that‘s fodder for the next upswing eventually. Many signs are pointing towards it – emerging markets rising with the dollar on the defensive, for example. Yes, the dollar with yields are key to watch now.

S&P 500 was led higher by Nasdaq, which more than welcomed further retreat in yields. The tech led rally is here, and value while not down and out, is taking a breather. Especially financials don‘t like the move in yields, and we aren‘t at the 1.40% mark on 10-year Treasury bond yet. The summer lull in bonds is here, and my views on inflation getting permanently elevated, Fed‘s taper plays, bond yields retreat, inflation rearing its ugly head later this year before a growth scare strikes, can be found in the Latest Highlights and this week‘s articles amply discussed.

So, stocks don‘t look like retreating, as the bond market momentum doesn‘t favor much downside, and tech would likely overpower that.

Let‘s briefly check the reactions of other markets to yesterday‘s well telegraphed CPI springboard theme in stocks and precious metals.

Gold moves better be viewed through the leading miners – these recovered from their prior underperformance. The yellow metal‘s swings best be viewed now through the optics of how much inflation is perceived as burning, declining TIP:TLT ratio notwithstanding. And the premarket moves throughout commodities mean that the marketplace isn‘t convinced about the Fed‘s seriousness in tackling inflation, justifying my earlier deep skepticism on the taper smoke and mirrors games.

Crude oil chart is about decreasing upside momentum, and rising volume smacking of distribution as the lower knots show. I‘m looking for relatively shallow drop maximunm, and a correction in time rather than in price.

Bitcoin is still challenging the declining resistance line connecting May and Jun rebound highs, and Ethereum isn‘t confirming Bitcoin‘s strength. The bears have an opportunity to strike, weekend including.

Let‘s move right into the charts (all courtesy of www.stockcharts.com). 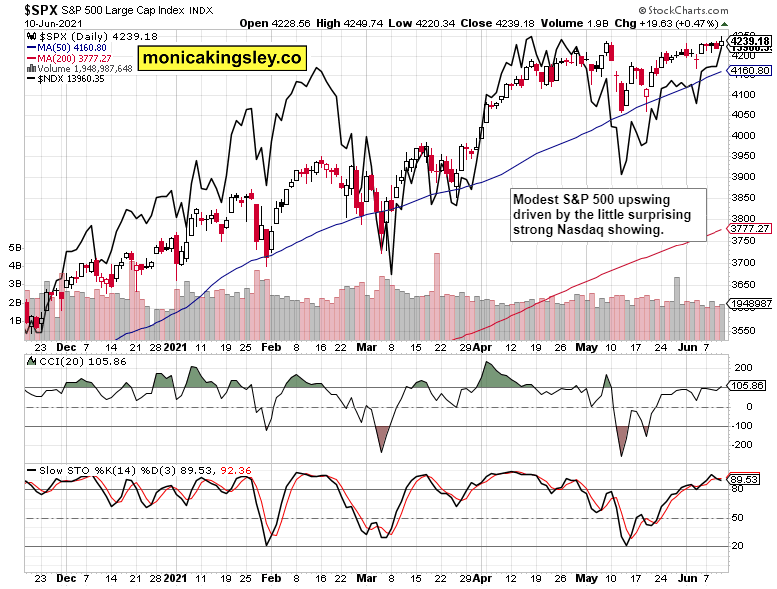 S&P 500 upswing was clearly driven by the Nasdaq surge, which is a defensive reaction to retreating yields taking their toll on high beta plays.

High yield corporate bonds have underperformed on the day, but the picture doesn‘t uproot the risk-on trades in the least.

Technology including $NYFANG was again in the driver‘s seat as value just can‘t take to the sharply retreating yields.

Miners rising is the most important feature, with gold reliably refusing its premarket decline coming in as second. Look for passing the baton between gold and silver alongside the inflationary winds affecting commodities.

Crude oil is hanging in the balance, but a sharp correction isn‘t favored.