The price of gold remains at $1,850, and the key drivers are higher bond yields and a stronger risk appetite.

Last week, the yellow metal tanked below $1,900 again, and it hasn't rebounded since the plunge – instead, the price of gold has stayed at around $1,850. 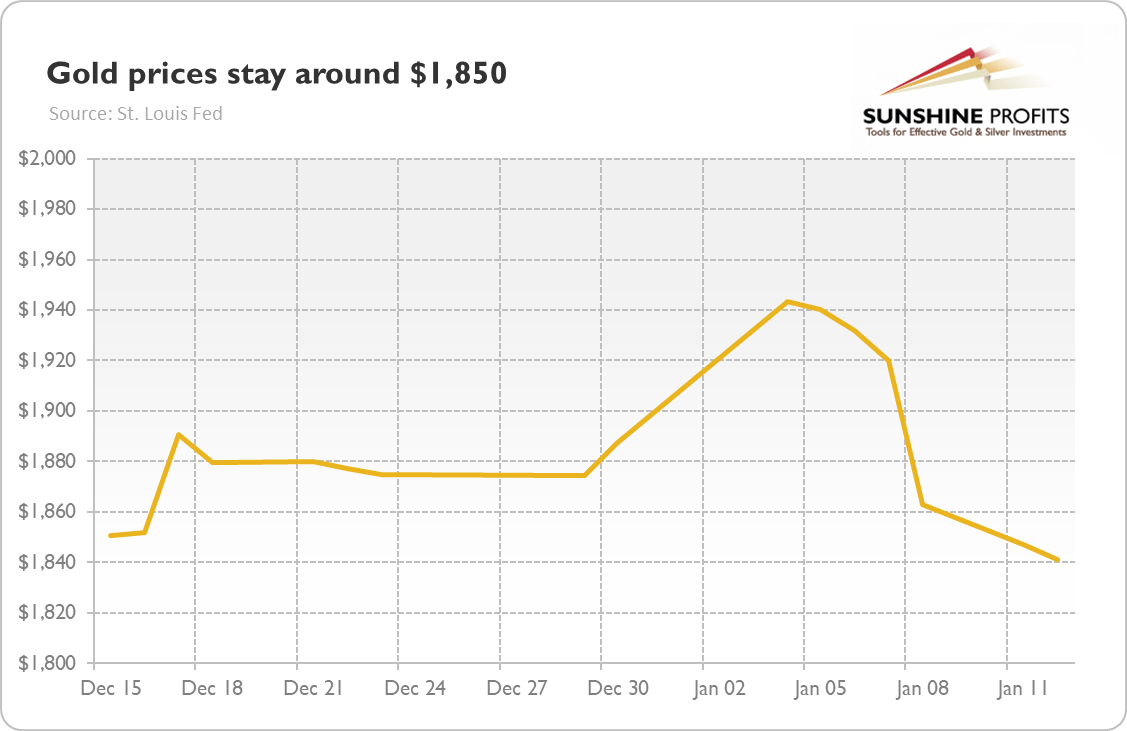 What happened? The main driver of the recent weakness in the precious metals market has been the Democratic victory in the Georgia Senate elections. Thanks to this trifecta, the Democrats have taken control of the White House, the House of Representatives, and the Senate. Consequently, there are lower chances of a political gridlock in Washington and higher chances of smooth cooperation between Congress and the incoming administration of Joe Biden. So, the expectations of additional economic support have risen, thereby strengthening hopes for a quicker economic recovery.

Hence, investors went euphoric and increased their risk appetite. They sold safe havens such as gold and disposed of treasuries, pushing the bond yields higher (see the chart below), which in turn hurt the yellow metal. 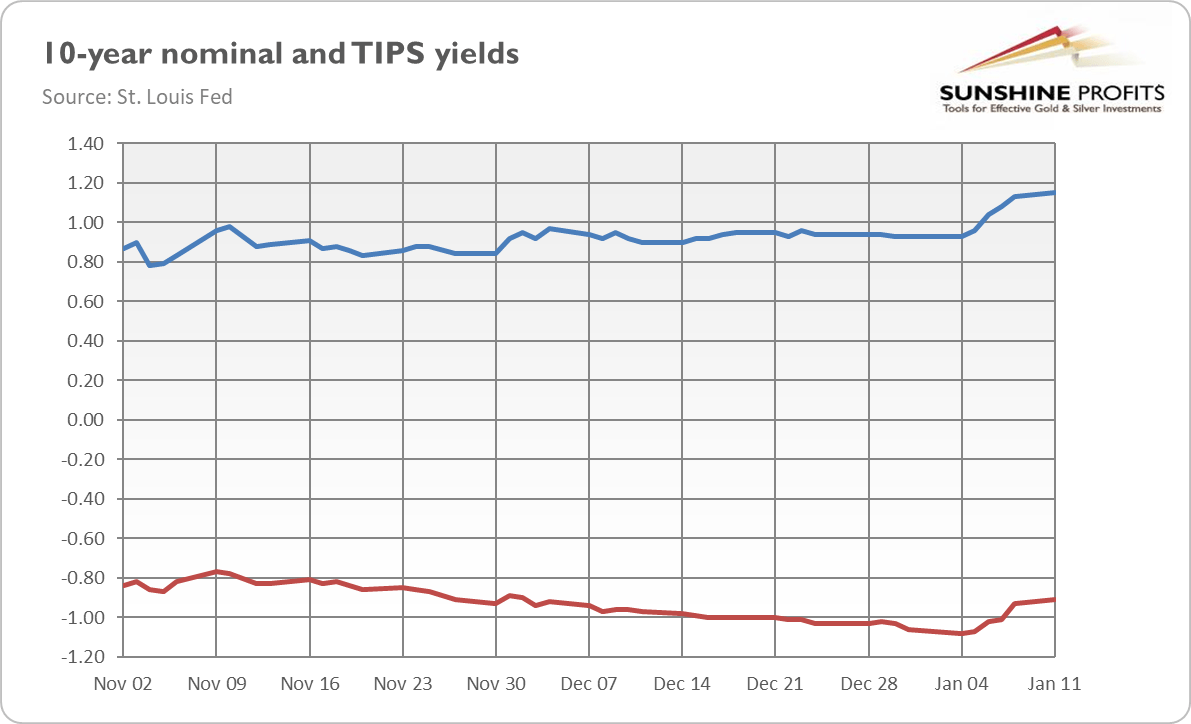 However, the interest rates are still historically low, and the real interest rates remain deeply in negative territory. Although some measure of normalization is standard, the return to pre-pandemic levels is unlikely. The unprecedented increase in worldwide debt implies that we are stuck in a high debt and low interest rate trap. After all, all these debts have been sustainable only because the yields have been low, so I doubt whether we will see an important rebound in them.

Is gold doomed now, given that the Democrats swept both the White House and Congress? Not necessarily. The macroeconomic outlook for 2021 might be worse than for 2020, as the economy should recover and monetary policy should be less dovish – but it's still positive for gold. After all, historically, gold has shined during the early phases of various economic recoveries. Some analysts even claim that we have not reached the phase of an economic recovery yet – as the liquidity crisis has transformed into a solvency crisis.

In other words, it's always important to distinguish the short-term outlook from the longer-term potential. Gold currently suffers because of the higher yields, but the long-term picture seems to be more positive. The real interest rates, which are more important for the precious metals market, have increased to a lesser extent – and they have stayed well below zero (as the chart above shows).

At some point, investors will start factoring in that a large fiscal stimulus projected by the Democrats could increase the public debt to uncomfortable levels, thereby increasing the risk of a sovereign debt crisis. They could also begin pricing in the risk of higher inflation and a larger Fed's balance sheet, as the U.S. central bank and the Treasury wouldn't welcome much higher interest rates . As a reminder, gold benefited from the easy fiscal policy in the aftermath of the first wave of the coronavirus pandemic, so it shouldn't go out of favor now. Indeed, the huge fiscal deficit combined with the current account deficit will take the so-called twin deficit to a record 25 percent of the GDP, which shouldn't be without an impact on the price of gold.

Instead, gold still has a material upside in the upcoming months, although it could shine less brightly than it did last year, at least until inflation rebounds, or until the Fed expands its accommodative monetary stance. Yes, the U.S. central bank remains dovish, but it's not eager right now to shoot from its bazooka again. So, the monetary policy will be relatively more hawkish than it was in 2020, which could limit potential gains in the gold market.