On Tuesday gold prices reached their highest levels in six years, having been boosted by the prospect of lower interest rates as well as rising geopolitical tensions. However, the yellow metal is trading sharply lower after Federal Reserve Chairman Jerome Powell struck a neutral tone in comments made on Tuesday. While speaking at the Council of Foreign Relations in New York he stated;

At the forefront of uncertainties are the upcoming U.S.-China trade talks. Presidents Donald Trump and Xi Jinping are set to meet at the G-20 summit in Osaka, Japan later this week.

“Just sitting here today, I think 50 basis points would be overdone…I don’t think the situation really calls for that, but I would be willing to go 25”

Lower interest rates make the U.S. dollar a less attractive investment and increases the appeal of non-yielding assets such as gold. For this reason, lower prospects for rate cuts pressures gold prices.

Elsewhere in the world of alternative investments, bitcoin continued its remarkable comeback on Wednesday. Facebook’s Libra cryptocurrency and the upcoming bitcoin halvening event in 2020 are viewed as major drivers in the recent surge of buying interest. During the ‘crypto winter’ of 2018, bitcoin lost 70% of its value. However in 2019, bitcoin mania appears to be back with the digital currency posting gains of over 200% since April. On Wednesday bitcoin rallied above $12,900 to reach its highest levels since January of 2018. 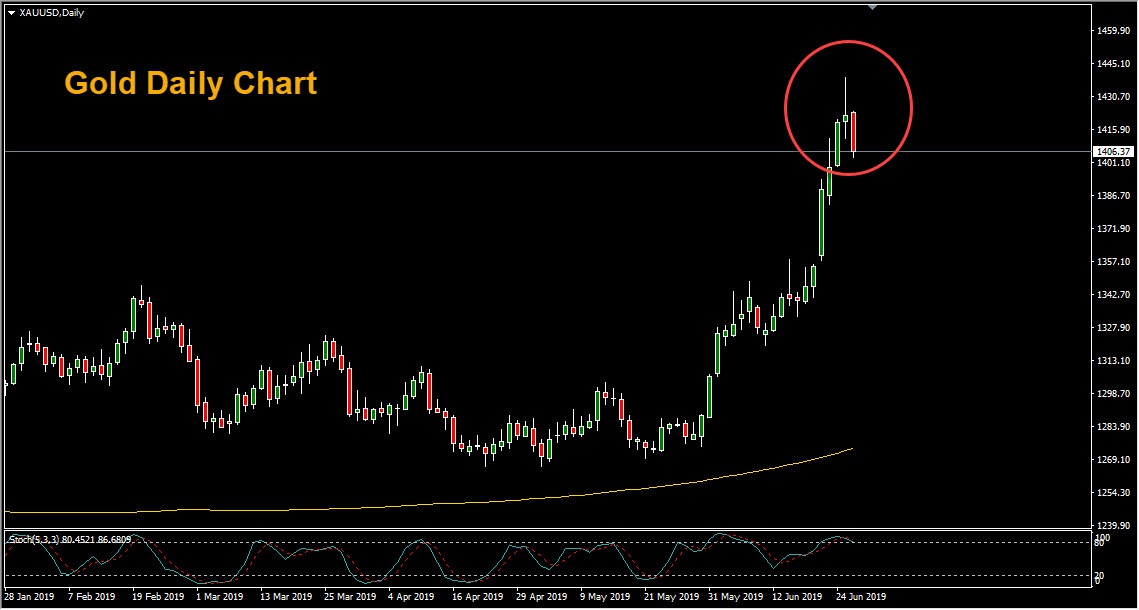