Last week, the Fed provided the steepest rate hike in three decades. Although it was an extremely hawkish move, gold prices… increased!

It was the historic FOMC meeting! Despite Powell’s earlier rejection of such a scenario, the US central bank raised the federal funds rate by 75 basis points last week to 1.5-1.75%:

The Committee seeks to achieve maximum employment and inflation at the rate of 2 percent over the longer run. In support of these goals, the Committee decided to raise the target range for the federal funds rate to 1‑1/2 to 1-3/4 percent and anticipates that ongoing increases in the target range will be appropriate.

The hike followed a 50-basis point move in May and a 25-basis point liftoff in March. It was the steepest move since 1994, and in the two most recent tightening cycles, the Fed conducted only 25-basis points hikes. Hence, the recent meeting cemented a hawkish revolution within the US central bank. Of course, the Fed simply had no choice, as inflation accelerated to 8.6% in May, and the Fed was, and still is, terribly behind the inflation curve. Such a bold increase was expected by Wall Street. However, the hike was not unanimous as Esther L. George preferred to raise interest rates by 50 basis points.

Besides the steeper move, the June monetary policy statement was barely changed compared to May. Interestingly, the Fed removed the sentence “with appropriate firming in the stance of monetary policy, the Committee expects inflation to return to its 2 percent objective and the labor market to remain strong,” but added this one: “the Committee is strongly committed to returning inflation to its 2 percent objective.” Did the Fed give up on inflation? After all, it no longer expects to reach its own target, and merely mentions its commitment…

The statement was accompanied by the fresh economic projections made by the FOMC members. So, how do they look at the economy right now? As the table below shows, the central bankers expect a slightly higher unemployment rate and much slower economic growth this year compared to the March forecast. 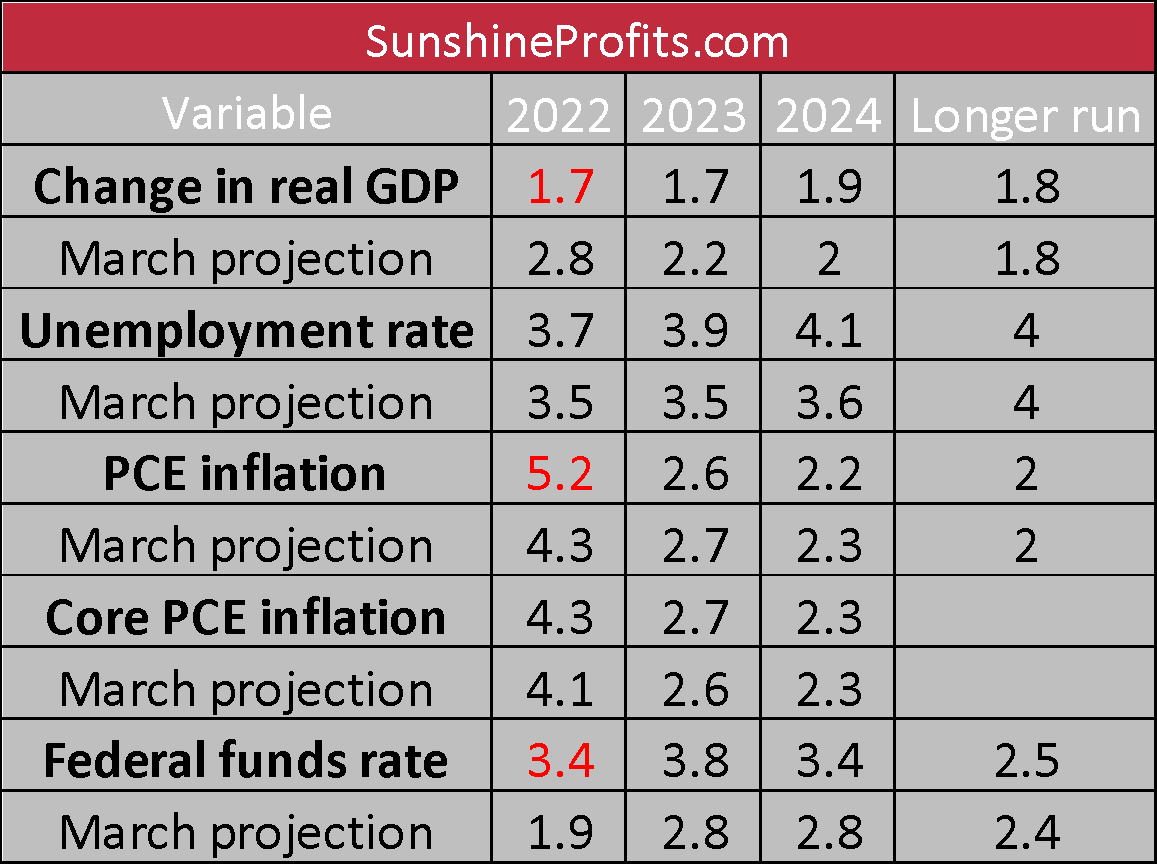 What’s more, the FOMC participants see inflation now as even more persistent because they expect 5.2% PCE inflation at the end of 2022 instead of 4.3%. This is still wishful thinking, as inflation was 6.3% in April and is likely to have accelerated further in May.. Anyway, slower economic growth accompanied by higher inflation makes stagflation more likely to occur, which should be positive for gold prices.

Last but not least, a more aggressive tightening cycle is coming. According to the fresh dot-plot, the forecasted path of the federal funds rate will become steeper as it’s expected to reach 3.4% this year and 3.8% next year, compared to 1.9% and 2.8% seen earlier. It implies an additional 150 basis points of hikes in 2022 relative to the previous forecast and almost 180 basis points to the current level of 1.50-175%.

Hence, to fulfill the implied projection in the dot-plot, the Fed would have to hike interest rates by about 50 basis points at each meeting scheduled this year, or even more, given that the Fed has so far underestimated the level of inflation and interest rates. Even with 3.4%, the US central bank would stay accommodative given the level of inflation – according to the Taylor rule, the federal funds rate should be decisively above 5%! Hence, fasten your seat belt. It’s going to be a bumpy night!

The FOMC meeting was followed up by Powell’s press conference. He reiterated a few times how the Fed is committed to combating inflation and announced either a 50- or another 75-basis point hike in July:

We anticipate that ongoing rate increases will be appropriate; the pace of those changes will continue to depend on the incoming data and the evolving outlook for the economy. Clearly, today’s 75 basis point increase is an unusually large one, and I do not expect moves of this size to be common. From the perspective of today, either a 50 or 75 basis point increase seems most likely at our next meeting.

Powell also acknowledged that engineering a soft landing could be more challenging:

Do I still think that we can do that? I do, I think there’s, I think there’s, I don’t want to be the handicapper here, I just, that is our objective and I do think it’s possible. Like I said though, I think that events of the last few months have raised the degree of difficulty, created great challenges, and again, the answer to the question, can we still do it, there’s a much bigger chance now that it’ll depend on factors that we don’t control, which is fluctuations and spikes in commodity prices could wind up taking that option out of our hands.

What does it all mean for the gold market? Well, the Fed held the most hawkish meeting in almost 30 years, but gold held its ground. The central bankers hiked interest rates by 75 basis points and raised their forecasted level of appropriate federal funds rate from 1.9 to 3.4% by the end of this year. In addition, Powell announced that the Fed will likely hike interest rates by either 50 or 75 basis points in July. Despite all this hawkish news, gold didn’t plunge, as one could expect. As the chart below shows, the price of the yellow metal actually increased slightly from the week. 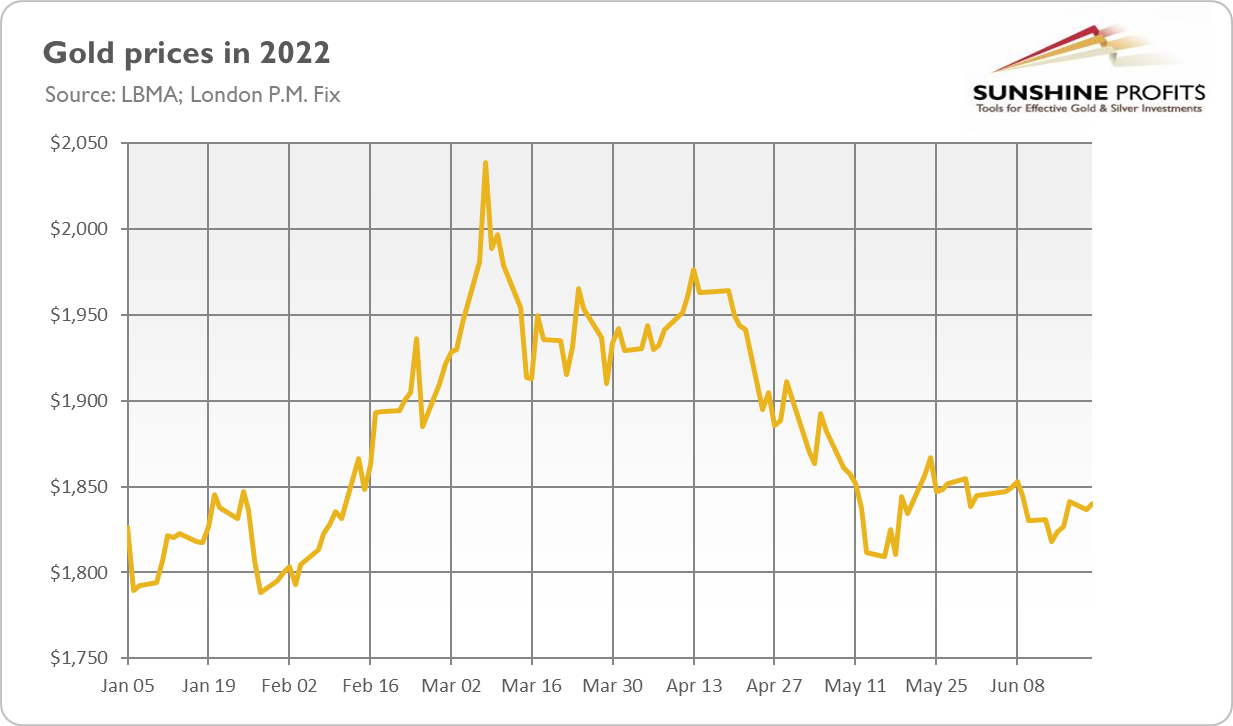 Why? Well, the main reason is that such a steep increase indicates that the Fed has finally noticed the inflation threat and decided that the situation is so serious that a bold, unusual move is warranted. However, such steep hikes make a soft landing less likely and prompt traders to increase their bets that a recession is imminent. Given the indebtedness of the economy, steep hikes could be difficult to swallow for the economy. So, the Fed walks a thin rope between high inflation and an economic downturn. The strengthening of recessionary worries increases the safe-haven demand for gold, supporting its prices.

Another positive aspect for gold is that steeper hikes bring us closer to the dovish pivot. The Fed is introducing interest rate hikes to have more flexibility in the future. In other words, the faster the US central bank lifts the federal funds rate to its desirable level, the sooner it can reverse the hikes and start cutting rates. According to James Bullard, St. Louis Fed President, front-loading could lead to policy easing in 2023 or 2024. The peak in the Fed’s hawkishness may arrive even sooner, as Powell said during his press conference: “today’s 75 basis point increase is an unusually large one, and I do not expect moves of this size to be common.” So, I believe we will only see one such large move before the Fed raises rates by 50 or 25 basis points for a couple of months. When the about-turn in US monetary policy occurs, gold should rally, especially since the reversal may occur in an inflationary environment.