Some 100 years have passed since the Spanish Influenza pandemic, and around 300 since composer Antonio Vivaldi wrote “The Four Seasons.” After a turbulent 2020, the impact of coronavirus in 2021 can be divided into four different periods with distinct reactions in markets.

Many have cursed 2020 but flipping the page into 2021 is unlikely to do wonders. COVID-19 is set to rage early in the year, especially in developed countries in the northern hemisphere. Fears of coronavirus variants – such as the one identified in Britain – are set to stoke fears.

Another source of concern remains the slow pace of vaccination. The UK was the first country in the West to approve and administer the Pfizer/BioNTech jab, yet implementation lags behind. The US gave its green light also to the 100% American Moderna injection, and it is also moving frustratingly slowly.

Coronavirus cases developments in the US, the EU, and the UK: 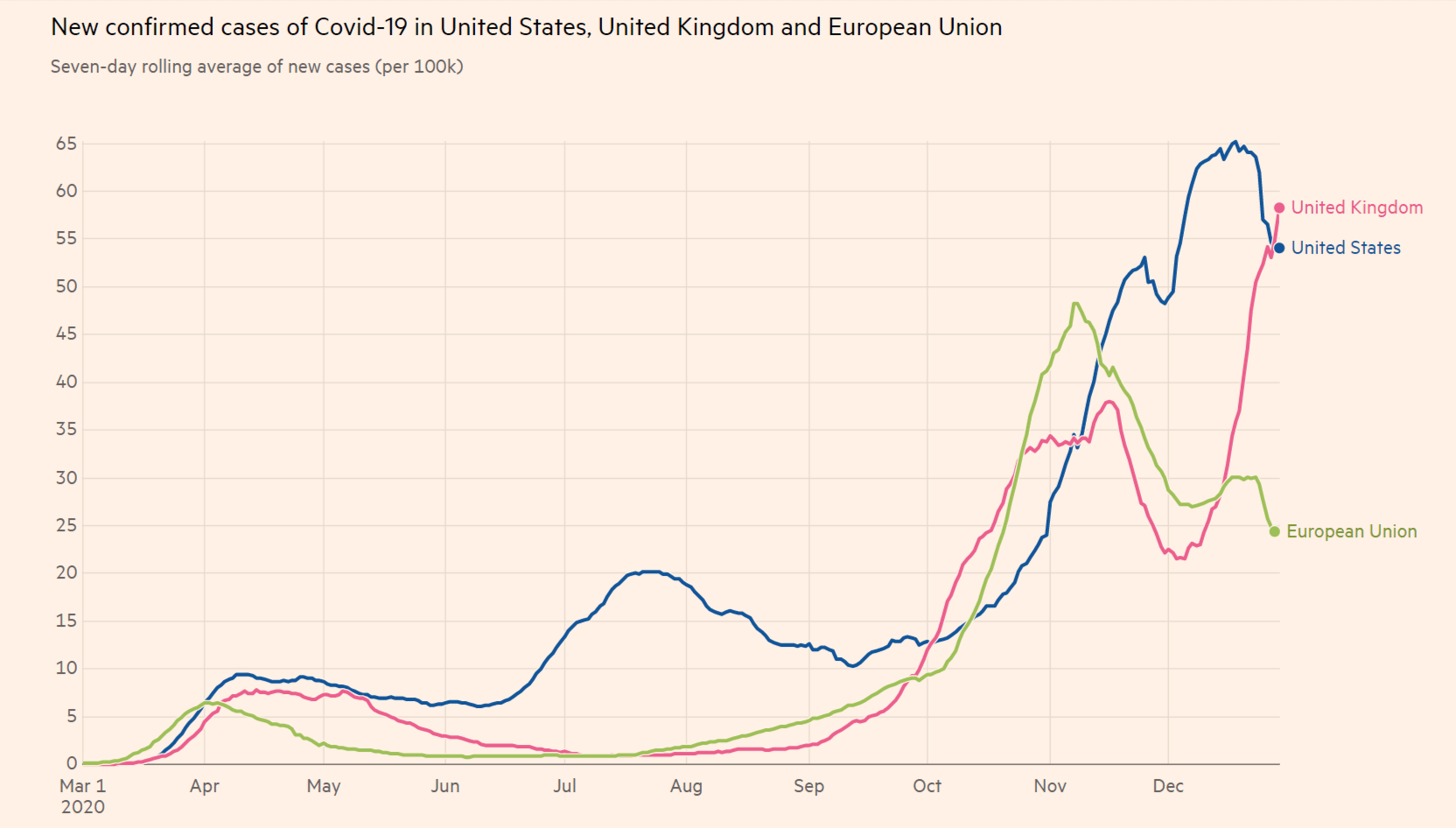 The European Union is moving at a snail’s pace in comparison to its peers in both approvals and deployment. While all are set to ramp up their efforts, the virus will likely remain the winner in the first quarter. Infections, hospitalizations, and deaths will probably continue their depressing uptrends, prompting authorities to keep the screws tight on lockdowns.

The dark winter is set to weigh on investors’ mood, boosting the safe-haven dollar. The greenback struggled in late 2020, covering short dollar positions that would fit handily with such a scenario.

The pound could be pounded – also as enthusiasm from reaching a Brexit deal would fade.

One point of light would probably come from Israel. The country of nine million has inoculated over one million people with the first vaccine dose as of early January – while imposing its third lockdown.

The test will come when it loosens restrictions. If hospitalizations remain under control – contrary to previous reopenings – Israel would show the world that vaccines work on a large scale. That could improve the mood late in the quarter.

It would also show that herd immunity is unnecessary for a return to a semblance of normality. Once the vulnerable population is immune from developing a disease, substantial aspects of daily life can return to normal.

When will Coronavirus end? Spring of hope on COVID-19 vaccines

Vaccine approval and especially production will likely blossom in the spring. Moreover, countries that have struggled early on – due to cold storage requirements or lack of experience with large projects – will have ramped up operations.

The University of Oxford/AstraZeneca vaccine may fall behind the efficacy of the Pfizer and Moderna ones. Still, mass production, moderate storage temperatures, and low prices should allow for quick administration. Another promising project comes from Jansen, an affiliate of Johnson & Johnson. Its one-dose jab would also accelerate availability and distribution.

Concerns about a low takeup – with anti-vaxxers especially prominent in Europe – would likely fade as the prize for getting the injection would be a return to normality.

All in all, after a mostly dim first quarter, there is room for market gains in the second one. In this scenario, the safe-haven dollar could come under pressure. The euro would be a significant beneficiary.

Contrary to popular belief, summer in the northern hemisphere is usually not a time of calm in markets. However, 2021 could see a blessed return to beaches and some tranquility in the financial world.

If there are no nasty surprises, the world will return to 80% normality – no super-spreading karaoke events – but most other activities could go on with diminishing mask-wearing.

For the dollar, that could result in some stability as well, especially against European majors, the euro and the pound. The greenback could lose ground to the Australian and New Zealand dollars. Higher demand from the US and Europe could boost these antipodean currencies.

The South Pacific skirted the worst of the pandemic in 2020, and both the aussie and kiwi advanced. After a pause early in the year, they could resume their gains in the third quarter of 2021.

Do vaccines prevent disease or also infection? How long do they last? These are still open questions. Nevertheless, by the fourth quarter of 2021, the world may reach herd immunity against SARS-Cov-2, the virus that causes COVID-19. That would be exciting news that would allow throwing face masks away.

However, perhaps a new strain or mutation would emerge. Seasonal flu, a far less lethal virus, tends to vary from year to year, and pharmaceutical companies would rush to wage a new war against the virus. Science is set to have an easier victory against covid – modifying existing vaccines is easier than developing new ones – and output would be ramped up.

Overall, even in this mutation scenario – which is only one option for the distant fourth quarter – there are reasons to be hopeful.

Will herd immunity and advances in science weigh on the dollar as in similar bouts of optimism? Not necessarily. The world is already awash with cash coming from central banks and governments, some of which went to savings. Americans, Europeans, and others may reach into their piggy banks and spend these funds,while supply may not be there.

Inflation, which was written off in 2020, may reemerge as a theme in 2021 – with rate hikes from the Federal Reserve becoming a real option for 2022. In this scenario, the dollar may rise in response to defeating the virus, a paradigm shift.

The biggest loser would be the euro, as the European Central Bank has a long way to go from its negative rates. Another laggard would be the pound, still struggling with Brexit.

On the flip side, commodity prices will likely rise in this inflationary scenario, supporting countries that export them. The aussie, kiwi and the Canadian dollar could put up a fight against the greenback if their central banks follow the Fed in signaling a readiness to raise rates.

A dark winter may weigh on sentiment and lift the dollar, reversing some of the falls seen in late 2020. Massive vaccination campaigns could boost sentiment in the spring and send the greenback back down. In the summer, traders may complain about modest volatility before autumn brings new action – herd immunity would result in inflation and prospects of Fed rate hikes.