Another weekly decline showed that there was little reprieve for GBP bulls. The GBP/USD recovery from two-year lows of 1.1933 faltered amid the Fed-BOE monetary policy divergence and dire UK economic outlook. Attention now turns tothe critical UK inflation report and Fed Chair Jerome Powell’s testimony in the week ahead for fresh trading impulse for cable traders.

GBP/USD failed to find any comfort at the start of the critical week, as the US dollar reigned supreme amid heightened risk-off flows. Last friday’s 8.6% surge in the US inflation rate flagged expectations of a 75 basis points (bps) hike in the Fed funds rate, which triggered a massive sell-off in global stocks. Growing concerns that aggressive policy tightening by the Fed could risk an economic recession sapped investors’ confidence. Meanwhile, yet another negative GDP print for the UK economy in April fanned recession fears, which smashed the GBP/USD pair to the lowest level since March 2020 at 1.1933 on Tuesday.

On Wednesday, GBP/USD witnessed a sharp turnaround from two-year lows after the Fed caved in to the expectations of a 75 bps lift-off. The Fed’s resolve to fight inflation offered the much-needed relief to the bond market, triggering a significant pullback in the long-dated Treasury yields, which eventually dragged the dollar down. The extended recovery in cable gathered steam on Thursday, as investors shrugged off a dovish BOE rate hike-inspired drop to 1.2040 levels. The UK central bank raised the key rates by 25 bps to 1.25%, as widely expected, although it hinted at a gradual approach to tightening in the face of emerging economic situation.

The dynamics around the dollar, yields and risk trends remained in play, with panic taking over the market sentiment once again after the Swiss National Bank (SNB) delivered a surprise 50 bps rate hike. BOE’s expected rate also added to the risk-off mood, reviving the safe-haven demand for the greenback on the final trading day of the week. Brexit concerns lurked and weighed on the sterling after the European Union (EU) threatened to take legal action as the UK government planned legislation to override a portion of its Brexit deal. Having faced rejection above the 1.2400 level, cable headed back towards the weekly trough.

It’s a relatively light week for cable traders, as the US is on a Juneteenth National Independence Day holiday. There is little of note, in terms of the first-tier economic releases, on both sides of the Atlantic in the first two trading days of the week.

Wednesday holds the crucial UK inflation data publication, which will be a big market driver for the pound, as it will affect the BOE rate hike expectations. The UK inflation rate touched a 40-year high of 9% YoY in April. On the US docket, Fed Chair Jerome Powell is due to testify on the Semi-Annual Monetary Policy Report before the Senate Banking Committee.

The Preliminary Manufacturing and Services PMI reports from the UK, as well as, the US will be dropping on Thursday. The second day of Powell’s testimony will be also closely followed.

The UK Retail Sales and the US revised Michigan Consumer Sentiment data will be watch out for fresh trading opportunities in GBP/USD.

Also, in focus will be the UK government unveiling of the law to override part of Brexit deal. Looming Brexit and recession risks in the UK is likely to emerge as a nightmare for GBP bulls. Speeches by the Fed and BOE policymakers will fill in the data-quiet days. 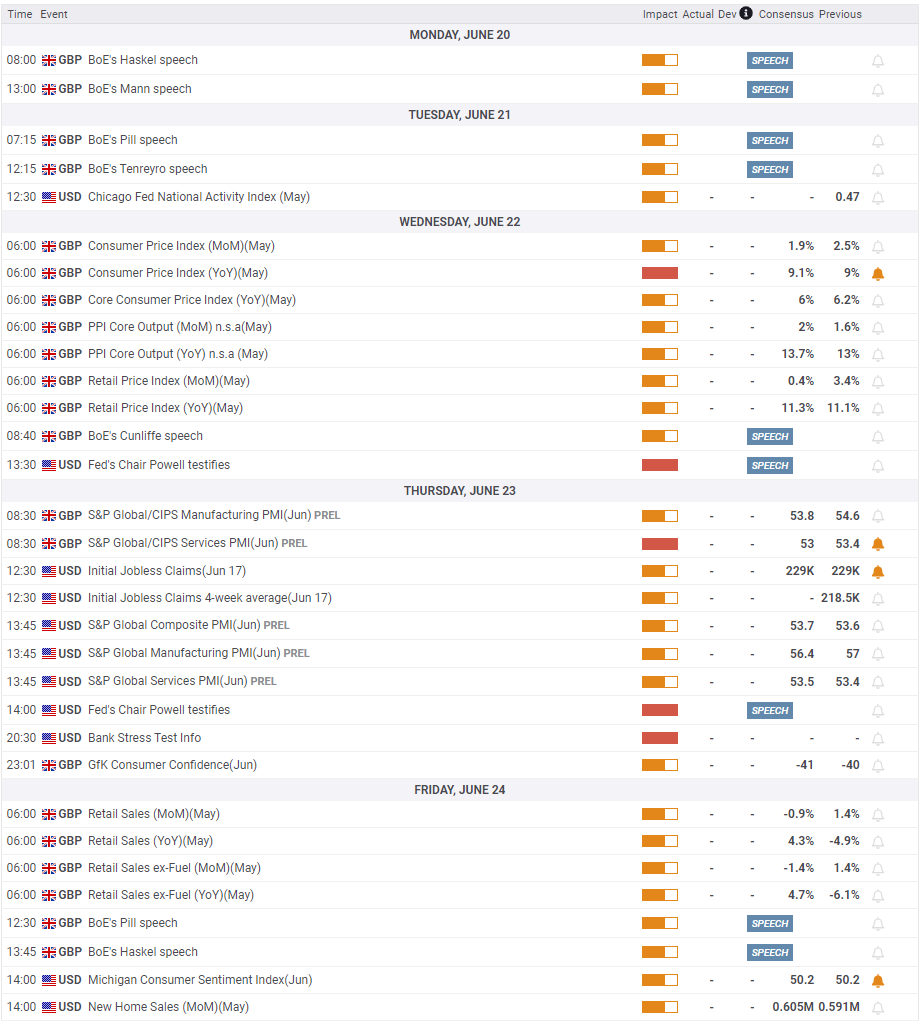 Despite the decisive recovery witnessed on Wednesday and Thursday, the near-term technical outlook doesn't yet point to a bullish shift. The Relative Strength Index (RSI) indicator on the daily chart turned south and retreated to 40 on Friday after having climbed to 50 on Thursday, suggesting that sellers look to retain control.

Additionally, the fact that the pair failed to break above the Fibonacci 61.8% retracement of the latest downtrend at 1.2400 could be seen as a bearish continuation sign.

1.2300 (Fibonacci 50% retracement) forms interim resistance ahead of 1.2400 (Fibonacci 61.8% retracement). In case the pair rises above the latter and starts using it as support, this could be seen as a significant bullish development and open the door for additional gains toward 1.2450 (20-day SMA) and 1.2500 (psychological level).

FXStreet Forecast Poll shows that a large majority of polled experts expect GBP/USD to rise over the next month with an average bullish target of 1.2364. 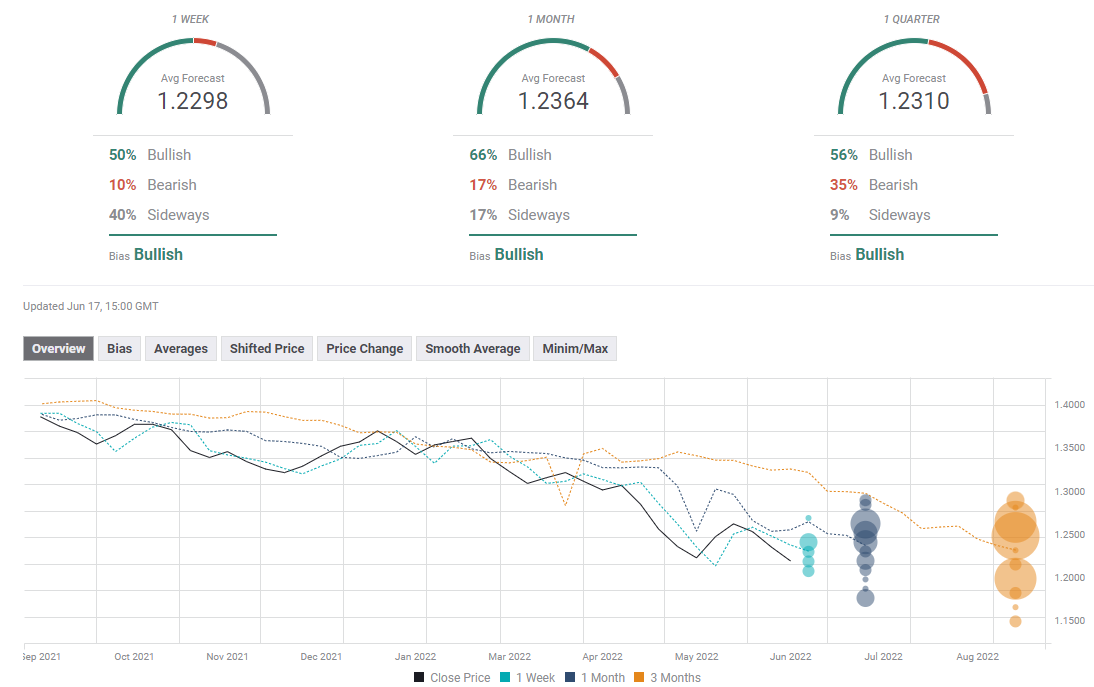 XRP price hints at signs that it is ready for an explosive second half of the year. Investors can expect Ripple to rally roughly 83% from the current position to $0.639 soon. A daily candlestick close below $0.340 will invalidate the bullish thesis for the remittance token.