Taper tantrum – this fear of tightening from the Federal Reserve has been supporting the dollar and overwhelming markets, at least until jobs data missed estimates. Evidence of inflation is set to be crucial to the next GBP/USD moves, alongside ongoing speculation about Britain's reopening.

This week in GBP/USD: Dollar roars back

Time to think of thinking of tapering – these words by Philadelphia Fed President Patrick Harker were part of the mix sending the dollar higher. There seems to be growing support to reduce the pace of dollar printing at the world's most powerful central bank. The Fed currently buys bonds worth some $120 billion every month.

ADP's labor figures showed a leap of 978,000 private-sector jobs, and weekly Unemployment Claims dropped below 400,000 – both adding to the dollar's bullishness.

The picture dramatically changed with Nonfarm Payrolls figures for May, which missed estimates with only 559,000, and on top of only modest revisions to April's even worse shortfall. The dollar tumbled, yet has one silver lining – wage growth beat estimates.

On the virus front, cases are rising in the UK, and that has been weighing on sterling. The rapid spread of the variant first identified in India, now called Delta, has cast doubts about Britain's planned reopening. Prime Minister Boris Johnson still sees it as happening, but he sounded more cautious than beforehand. 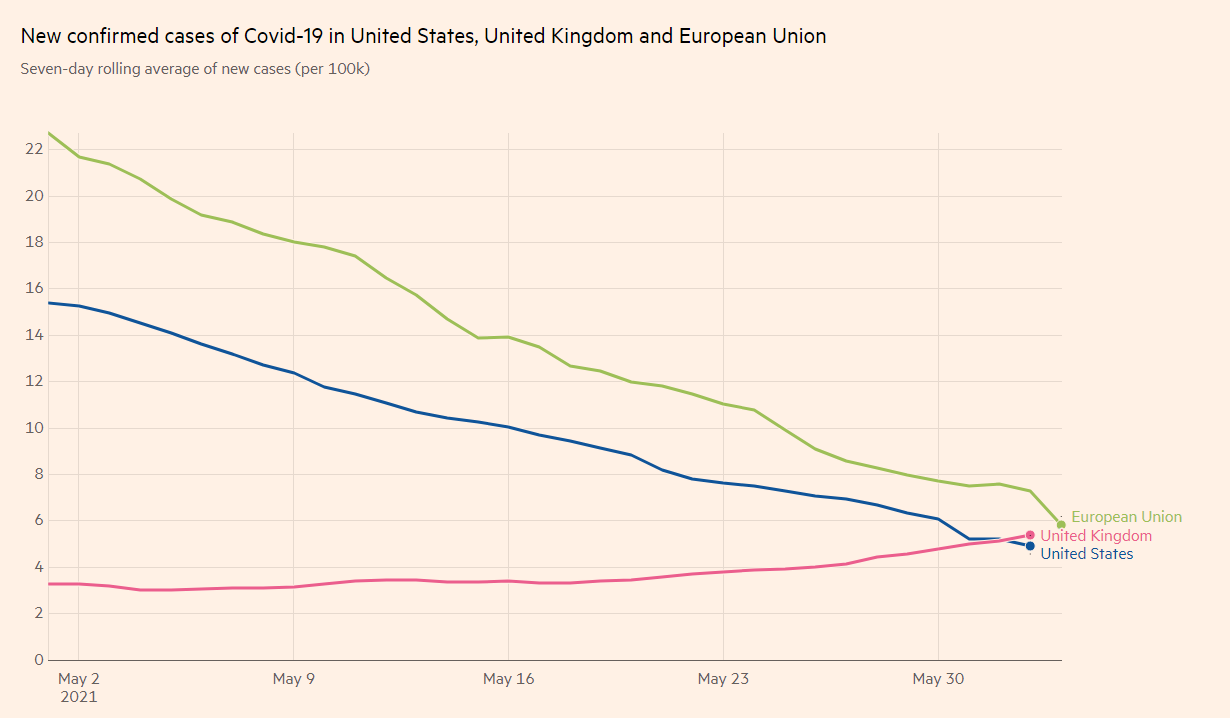 In the US, COVID-19 infections continued falling, but so has the pace of vaccinations. However, the focus is on the reopening that has already happened and the bumps on the road to recovery rather than fears of a setback in this return to normal.

US President Joe Biden met Republican Senators to advance his infrastructure spending plan, but no breakthrough was reached.

The clock is ticking toward June 21 – known as the summer solstice, but more recently as "Freedom Day," when the UK is set to return to normal. However, the rapid spread of the B.1.617.2 variant first identified in India and recently named Delta is causing worries.

The chart below shows how this strain is becoming the most prevalent one and causing a spike in cases. Apart from potentially preventing a delay in loosening restrictions, the virus has prompted other countries to demand a quarantine from people coming from Britain. 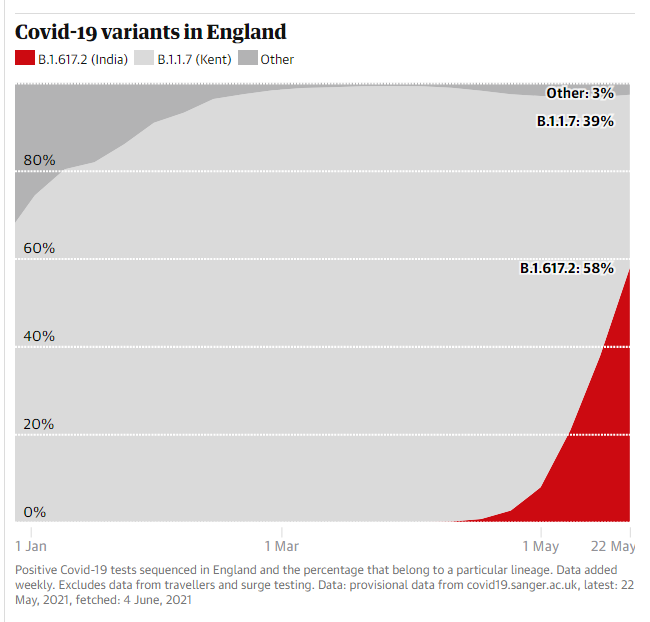 Investors would like to see the red area in the graph above being squeezed while vaccinations accelerating. Britain has been at the forefront of the global immunization campaign, but further progress is needed to defeat covid.

The government's political scandals seem to have been forgotten as the British public focuses on summer vacations rather than the mismanagement of the pandemic. However, frictions around Brexit have the potential to weigh on sterling.

Outgoing Bank of England Chief Economist Andy Haldane is set to speak early in the week, and he may feel freer to talk about future policy now that he is on his way out. The BOE convenes in the following week.

On Friday, the UK publishes monthly Gross Domestic Product statistics for April, which probably saw ongoing rapid expansion as the British extended their reopening. GDP figures have been beating expectations of late, and the expected jump of 3.8% in Britain's output could boost sterling.

Infrastructure: Contrary to the covid relief program, US President Joe Biden seems to be giving his best effort to reach a bipartisan agreement on an infrastructure bill with Senate Republicans. According to reports, he already lowered his demands from a bill worth over $2 trillion to just $1 trillion.

Any announcement of government investment would support the dollar, while an acrimonious mood could keep it down. Democrats could still go it alone, but they have a razor-thin margin.

Inoculations: While over half of all Americans have received at least one COVID-19 vaccine, the pace has substantially slowed. The White House has ramped up efforts to reach 70% of adults by July 4 as reaching as many people as possible is critical to depressing the virus.

Investors would like to see this chart turn back up. 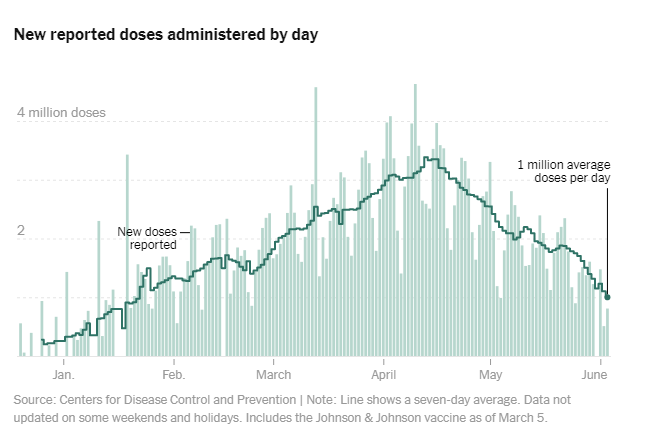 Is higher inflation here to stay? Consumer Price Index statistics shocked investors in April, exceeding already high expectations. Base effects – a drop in CPI this time last year – and a leap in prices of used cars was one of the reasons that Core CPI surged to 3%. However, elevated commodity prices and various shortages could keep inflation persistently higher.

The CPI data for May is bang in the middle between Nonfarm Payrolls and the Fed decision. Any sign that price rises are not transitory could raise expectations for the Fed to taper its bond buys, bring forward hiking rates and give an additional boost to the dollar.

The calendar points to a moderation in May – 2.3% in underlying inflation against 3% in April.

The University of Michigan's preliminary Consumer Sentiment Index for June is projected to show a minor increase in confidence. The inflation expectations component of this survey could steal the show, similar to what happened with ISM's PMIs.

Higher highs and higher lows – the daily chart still points to an uptrend, at least as long as cable holds above the 1.4010 line that is a clear separator of ranges. In the meantime, momentum remains to the upside and the currency pair is trading well above the 50-day, 100-day and 200-day simple moving averages, a bullish sign. 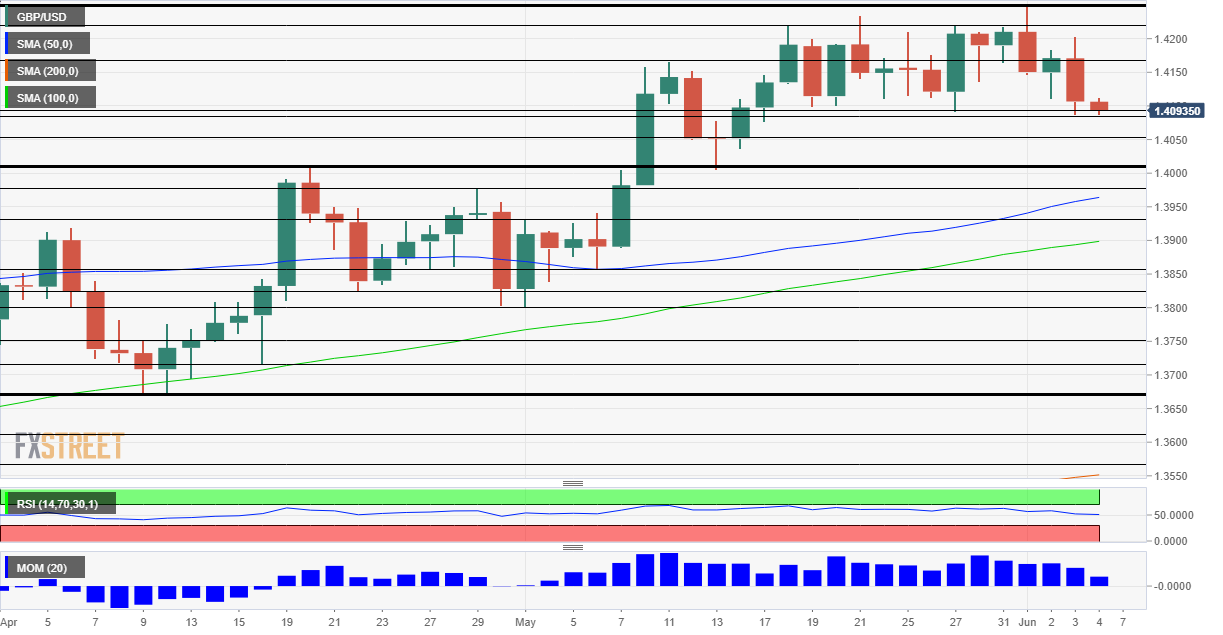 Fears may have gone too far – any miss in US inflation figures and steadying in UK covid cases could swing the pendulum in favor of cable bulls.

The FXStreet Forecast Poll shows that while experts provide a wide variety of price targets, their short-term, medium-term and long-term targets all coalesce in a narrow range at the 1.41 handle. Cable's recent range trading has probably convinced those surveyed that a breakout will take time. 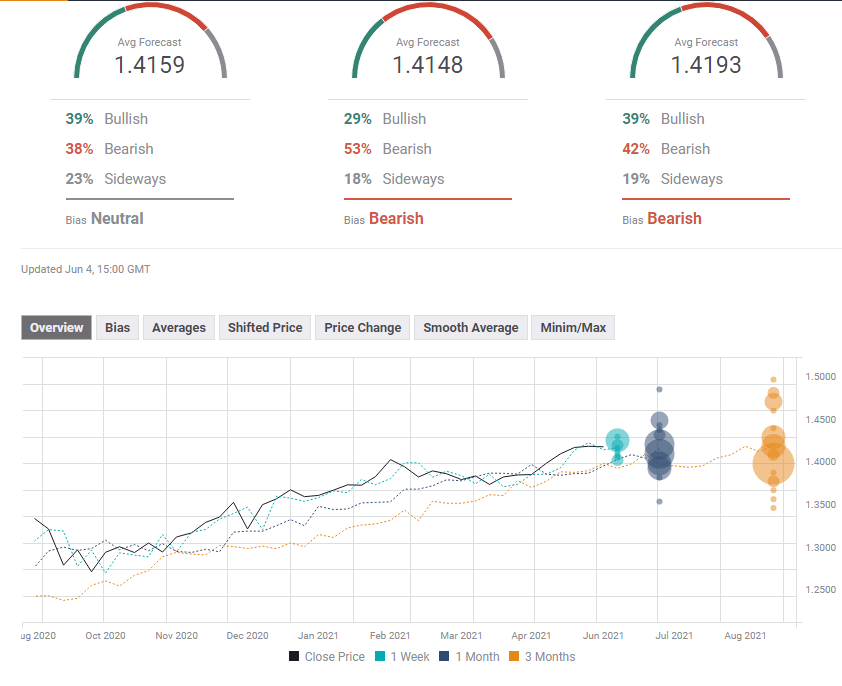