The American dollar strengthened against all of its major rivals, but it is ending the week unevenly against them. The EUR/USD pair trades sub-1.2200 as the week comes to an end. Little happened at the beginning of the week, as speculative interest was looking for a catalyst, finally provided by the Federal Reserve on Wednesday.

The Fed kick-starts a discrete tightening

The US central bank announced it would begin winding down one of the emergency programs created to support the economy throughout the pandemic. The Secondary Market Corporate Credit Facility, such is the name of the program, held $5.21 billion of bonds from different companies and $8.56 billion of exchange-traded funds that hold corporate debt. "Portfolio sales will be gradual and orderly and will aim to minimize the potential for any adverse impact on market functioning," the Fed said. This portfolio selling should be complete by year-end.

Alongside that first sign of tightening, US data was upbeat, particularly that related to employment. Mid-week, the May ADP survey hinted at a strong Nonfarm Payroll report by indicating that the private sector added 978K in May, largely surpassing expectations. Also, weekly unemployment claims contracted to 395K in the last week of May, the lowest reading since the pandemic began. The dollar strengthened on the news and reached fresh weekly highs against the shared currency.

However, the Nonfarm Payrolls report showed that the country added 559,000 jobs in May, missing expectations. The unemployment rate fell to 5.8% from 6.1%, better than the expected 5.9%. The greenback shed most of the ground gained on Thursday.

But it was not only about employment. The official US ISM indexes beat expectations, with the Manufacturing Index jumping to 61.2 and the Services PMI hitting 64 in May, both beating expectations and improving from April’s figures.

Good but not outstanding Europe

Across the pond, things are stable, to say the least. European data came in slightly better than anticipated, reflecting economic progress, although at a steady pace. Inflation in the Union remains subdued, with the core annual reading in May printing at 0.9%, according to preliminary estimates. On a down note, April Retail Sales missed expectations. In Germany, they were down by 5.5% MoM, while for the EU sales fell 3.1% in the same period.

The European Central Bank is in no rush to tighten its monetary policy, and the imbalance between central banks will play in favor of the American currency. Also, the pace of the economic comeback is faster in the US, which should also skew the balance on the dollar’s side. The soft employment figure took some pressure off the Fed, but it is worth noting that the Nonfarm Payroll report includes data partially coming from April, a month in which people continued to depend on checks. There is a long way ahead, but the June number will likely rock on the upside.

The calendar will be a bit more entertained next week, with the focus on the Union. The EU will publish the final reading of Q1 Gross Domestic Product, expected to be confirmed at -0.6% QoQ. The ECB is having a monetary policy meeting on Thursday, but no fireworks are expected this time. The central bank will likely maintain its current monetary policy unchanged and maintain a cautious tone about the risks related to the pandemic.

Germany will publish April Factory Orders, Industrial Production for the same month, and the June ZEW survey, expected to show an improvement in the Economic Sentiment. The US macroeconomic calendar will include May’s inflation figures and the preliminary estimate of the June Michigan Consumer Sentiment Index, foreseen at 84 from 82.9 previously.

The EUR/USD has posted a lower high and a lower low on a weekly basis, ending it in the red, which skews the risk to the downside. However, in the mentioned time-frame, the pair is developing above a flat 20 SMA, while the longer ones maintain their bullish slopes far below it. Technical indicators head nowhere, reflecting the lack of clear directional strength. The Momentum indicator heads nowhere around its midline, while the RSI indicator is flat at around 58.

The daily chart shows that the pair broke below a now flat 20 SMA while holding above the longer ones. Friday’s advance saw the pair recover up to the indicator, but it has been unable to rally beyond it. In the meantime, technical indicators are aiming to bounce from their midlines, but lack strength.

The pair could recover its potential on an extension above 1.2220/30 and advance towards the 1.2349 high. A break below the weekly low at 1.2103 should open the door for a steeper decline towards the 1.2000 threshold. 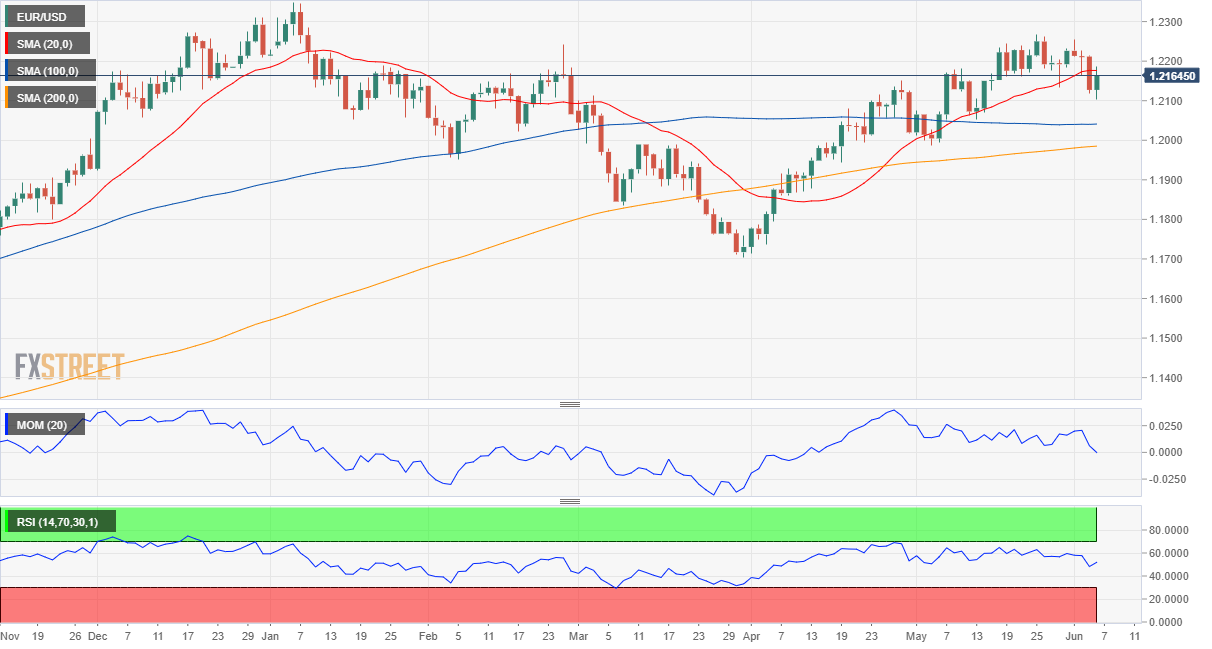 The FXStreet Forecast Poll shows that investors are willing to run into dollar longs. The pair is seen falling in the three time-frame under study, although the number of bears decreases in time, from 1.2133 in the weekly view to 43% in the quarterly perspective. The steeper decline is expected in the monthly view, as the pair is seen on average at 1.2074. Generally speaking, the pair is seen closer to 1.21 than to 1.22, although lower lows are also likely.

The Overview chart shows that the weekly and monthly moving averages turned south, with most targets accumulating below the current level and a few exceptions that bet for a bullish run. In the quarterly perspective, the moving average remains neutral, although there is a slight inclination towards higher levels.