"Productivity isn't everything, but, in the long run, it is almost everything."
– Paul Krugman, The Age of Diminishing Expectations (1994)

Productivity measures how well an economy uses its resources. It is key to a wide range of social outcomes: job creation, economic growth and even life expectancy. But throughout most of the current expansion, global productivity has stagnated. Measurement challenges are responsible for some of this disappointing trend, but it is also the result of systemically cautious business investment. Fortunately, we’ve seen recent signs that productivity may be rising more rapidly.

The concept of productivity is a simple ratio of outputs to inputs. In economic discussions, the output is typically a nation’s or region’s gross domestic product (GDP). In a labor productivity calculation, the input is the number of hours worked. Labor is not the only resource required for production, so total factor productivity calculations divide output by an aggregate of inputs, including land and capital. By using ratios like revenues/wages or volume/hours, the same concept can be applied to other contexts, from evaluating individual employees to assessing entire business sectors. 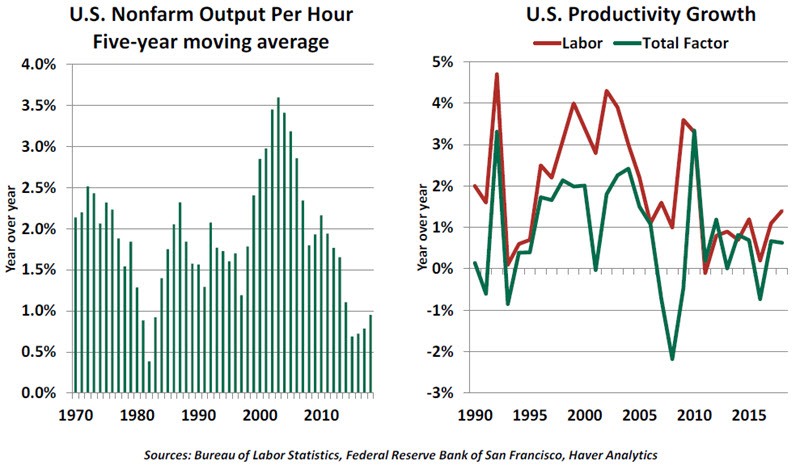 Broadly, much of today’s solid economic foundation can be traced to generations of continually rising productivity. Modern history is defined by technologies that changed our lifestyles and boosted our output. Electrification allowed for production through the night and enabled a host of new tools and technologies. Transportation saw a progression of multiple revolutions, from railroads to internal combustion engines and paved roads to commercial aviation. Farmland yields have never been higher. Telecommunications and information technology forever changed the way most businesses are run and managed. And improvements in healthcare have expanded the length and quality of our lives.

“Productivity is harder to measure in a service-driven economy.”

The current run of low productivity comes during an era that lacks a comparable technology breakthrough. The modern office, with workers at PCs or taking phone calls, looks much like it did thirty years ago, albeit with fewer walls and a looser dress code. Our smartphones are technological marvels, but they used for entertainment as easily as for business.

Some of the low productivity readings are due to measurement challenges. Productivity is harder to gauge as the economy shifts toward services. Consider healthcare: Continual innovation has improved patient outcomes. Hospital stays are shorter and less frequent, while the breadth and efficacy of medications continues to grow. However, pricing of medical services is opaque, and the value of health is difficult to quantify. In some cases, it is fair to say that productivity gains are visible everywhere but in the data. 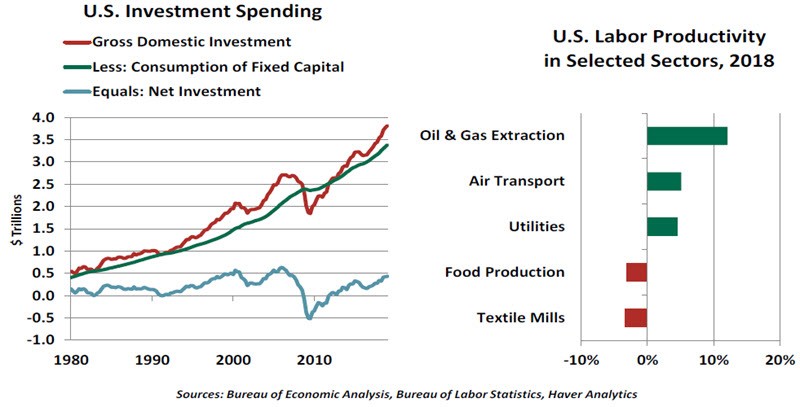 If productivity is to continue growing, it must happen through both broadening and deepening of capital. Broadening means increasing capital in tandem with growth in the labor force, allowing the use of existing technology at a wider scale. Capital deepening means investment in new technology to improve output per worker. In an office environment, broadening would mean placing a PC on every worker’s desk. Deepening would mean investments in worker training and new software to enhance the quality and speed of the work that they produce.

We believe capital deepening is leading to the current rebound in productivity. “Doing more with less” was a common ethos during and after the global financial crisis, but the recession is long in the past. Labor output has grown at a stronger rate than total factor productivity, suggesting that human capital worked harder while physical capital was not well-allocated. Capital investment (net of depreciation) remained below pre-recession levels for years after the crisis, a trend that grew hard to defend amid a growing economy.

Encouragingly, GDP results for 2018 showed increases in business investment in both software and research and development. Though these may have been a transient boost provided by US tax reform, these investments could pay dividends for years. If established businesses have grown too cautious, entrepreneurship will bring new, more efficient technologies and business practices to market. Meanwhile, labor productivity was held back as employers expanded. As the supply of labor fell, employers hired workers in need of training. With those newer hires coming up to speed, labor productivity will grow.

The strong economy shows in productivity measures, as well. In 2018, the greatest productivity gain was in oil and gas extraction, as hydraulic fracturing has become efficient. Strong demand for oil lifted prices more quickly than headcount. Airlines and utilities enjoyed similar fortunes. Manufacturing, however, saw productivity fall amid an increase in hours worked; as shown below, longer hours do not necessarily lead to greater productivity. As manufacturing workers become more efficient with experience, their productivity is poised to increase.

Bring on the Bots

Last week, one of our technology providers visited us to promote advances it has made in automation and artificial intelligence (AI). In an effort to impress, they had created an economist avatar that responded efficiently to standard voice questions.

Rather than being excited, I found myself feeling threatened. I certainly could not match the avatar’s reference capability; it had access to millions of economic statistics on command. And when asked about a particular topic, it called quickly on scores of articles. I suggested to the vendor that confronting a client with personal obsolescence was a poor sales approach.

I am not the only worker in the world who has anxiety about automation and artificial intelligence. Estimates of the potential disruption from these sources vary considerably, but the range of tasks that computers can handle more deftly than people continues to expand. This raises the fear of displacement. 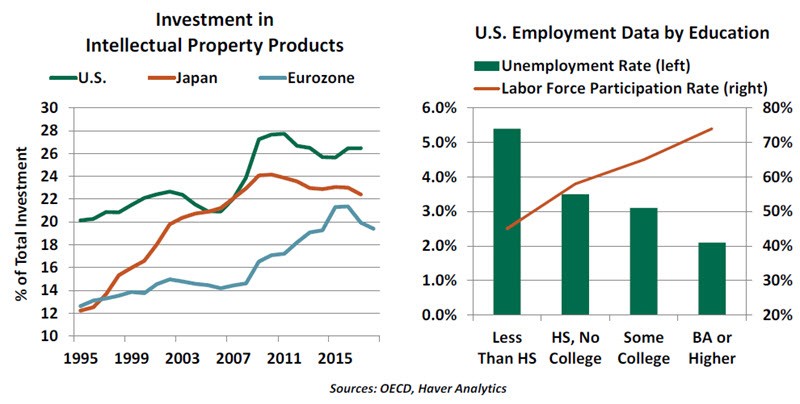 To be sure, technology rarely eliminates entire job categories. (There has been only one occupation dropped from the labor force rolls in the past 60 years: elevator operator.)  And mechanization has not stopped employment growth; new job creation in manufacturing and agriculture has been limited over the past century by automation, and yet jobless rates in the developed world are quite low.

While the new processes emerging today don’t eliminate the need for humans, they do take over component tasks that make up jobs. The more repetitive the action, the more likely that a machine can do it faster and more accurately. With computers able to perform more advanced analytics and to learn progressively, the range of possibilities has expanded to service professions.

From one perspective, this is to be cheered. Automation allows workers to become more productive, making them more valuable. We no longer have rows of accountants making entries in paper ledgers; systems take care of the debits and credits. But there are 50% more people employed in accounting services today than there were in 1990. Today’s professionals are doing higher-order work, analyzing trends in financial statements instead of laboring to produce them.

Further, the demographic profile of many countries is skewing older. With labor forces growing more slowly (if at all), maintaining output will require more productivity from automation. If machines are expanding to compensate for retiring workers, there should be less of a perceived threat. And some developments in automation and AI may actually help workers transition to the new world of work, as described in recent research from McKinsey.

“Automation has always made humans uncomfortable, and this time is no exception.”

But this is cold comfort to many who are uneasy about technological advances. It has always been easier to identify the jobs vulnerable to paradigm changes than it is to predict the jobs that will replace them. But it seems clear that the new positions will require higher levels of skill. As countries invest more heavily in technology, the differences of fortune experienced by those with different levels of education will increase.

To remedy the situation, some have proposed taxing robots and using the proceeds to pay basic levels of income to those who are displaced. That would be a bit extreme. A more sensible way of evening out the playing field would be to reinforce educational systems for people of all ages. Improving human capital for all segments of the population would be a great leveler.

Our vendor suggested that the economist avatar could be modelled to resemble me. (A scary thought if there ever was one.)  But it would not be a complete substitute. Many of the questions I get during client visits are not straightforward and require some interpretation. The vendor said that the avatar could learn this skill if I were willing to teach it; I think I’m going to hold off on that until just before I am ready to retire.

The prosperity of the global economy relies on a range of factors. Productivity is one of them. A decade into recovery from the 2008 financial crisis, labor productivity has shown some improvement but remains sluggish across several world economies. Policymakers are struggling to resolve these gaps, which the Bank of England refers to as the “productivity puzzle.”

Growth in labor productivity in the Organization for Economic Co-operation and Development (OECD), including the G7 economies, is well below pre-crisis rates. Labor productivity growth from 2014 to 2018 has averaged about half the growth rate seen in the early 2000s. Firms with high levels of debt sold assets and cut investment, leading to weaker aggregate productivity. Aging populations and stagnant technology were also responsible. Recent technological advancements are likely to boost productivity, as it takes time for the effects of new technology to show up.

Germany, though not the most productive, has a reputation for high productivity. It was one of the first countries to focus on digitization, value chains and modern business models to drive industrial activity. The vocational training given to German workers, as well as their relatively higher level of technical qualifications, has also aided productivity. That said, German productivity has slowed in recent years, in part due to relatively weak investment activity in the private sector.

“There are some clear and telling differences between economies that are highly productive and those that aren’t.”

On the other end of the spectrum, Italy is known for subpar productivity, stemming from high reliance on low productivity sectors, a relatively rigid labor market, a dysfunctional education system and lack of industrial modernization. Inefficient bureaucracy and regulations have also constrained the productivity and growth of small- and medium-scale enterprises.

This cross section of experience illustrates the factors separating winners from losers when it comes to productivity growth. Reducing rigidity in labor markets, strengthening product market competition and accelerating digitization can all be employed to solve the puzzle of poor productivity growth. The countries that embrace these concepts will be world-beaters in the decade ahead.