Months ago, with plenty of time to prepare for the June EU summit, there were many diverging views, ranging from European dreams to simply saying “nein” to everything. But as the summit looms, here are the four key themes from a monetary union reform perspective on the agenda on Thursday 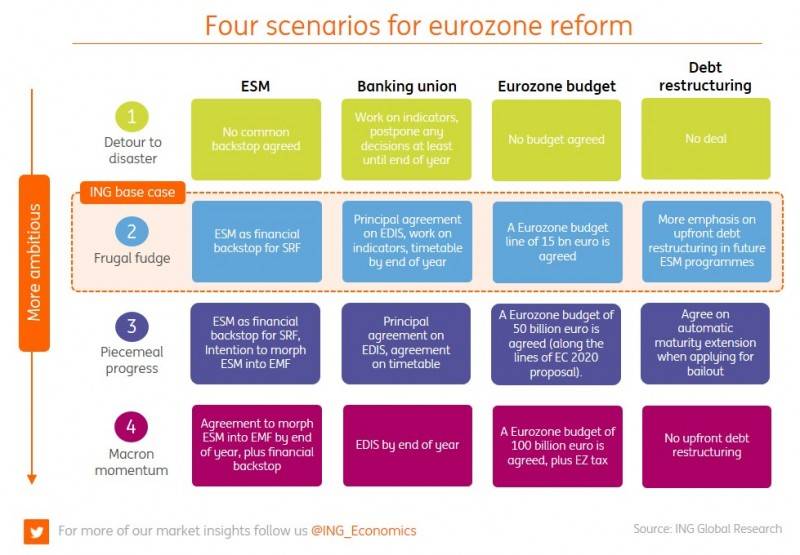 Good from the outside, disappointing from the inside

When Eurozone finance ministers met last week at the Eurogroup meeting, they had good news to present. Not only the end of the Greek bailout programme but also further reforms of the eurozone. But closer scrutiny suggests this ‘good news’ was only really about Greece. The so-called agreement on further eurozone reforms left more questions than answers and it was very difficult to agree with Eurogroup president Mário Centeno’s statement that “the question is no longer if, or how we will complete the economic and monetary union. The question is when?”

In fact, reading between the lines, there seemed to be very little committed agreement on anything. The only tangible decision taken was to make the European Stability Mechanism, which provides loans to EU area members facing financial distress a financial backstop for bank resolutions. But there still seem to be diverging views on how to further strengthen the ESM.

The term European Monetary Fund disappeared completely and on the eurozone budget, phrases like “going forward, in terms of deliverables, the Eurogroup will prepare by the end of the year an outline of the key features of a strengthened ESM covering all the issues” are painful for eurozone veterans to hear.

Where do we stand on the most important issues?

The French-German proposal suggests a more technocrat approach to countries’ emergency funding and an increased role in terms of monitoring. The idea here is to morph the ESM into an EMF. Both governments also put more emphasis on debt sustainability analysis for support to countries with upfront (automatic) debt restructuring.

While other core eurozone countries have shown support for these ideas, southern economies have been more opposed. Italy, in particular, is less enthusiastic about the German proposals of reforming the ESM into an EMF and creating debt restructuring procedures. It believes the ESM works well and is worried about the stability of markets if private write-downs were automatically part of a debt restructuring process.

The French-German proposal for a eurozone budget is similar to that of the European Commission for the 2020 budget. It's not a new stand-alone budget but a budget line dedicated to the eurozone as part of the multi-annual budget of the entire EU. One leg of the budget would be devoted to investments that are related to the structural improvement of the economy, specifically innovation and human capital. The other would be a macroeconomic stabilisation function that would not involve transfers. A financial transaction tax could be an important driver of the revenues related to the budget.

The question really is how large this budget will become. Here the differences between France and Germany remain quite large. French President Emmanuel Macron has said that he would love this to be a budget of several percentage points of GDP, which would be in the hundreds of billions of euros, while Merkel has indicated that she would like this to be in the “low double-digit billions”.

Also interesting is the proposal for the European Unemployment Stabilisation Fund, which Germany has recently shown signs of warming to. While stopping short of a common unemployment insurance scheme, this proposal would allow national social-security systems to borrow during a crisis. This money would have to be paid back during the upturn following the crisis.

The comment that “it is clear that our discussions are less advanced on possible fiscal instruments for convergence and stabilisation in the EMU” shows that the French-German ideas received very little support. The governments of the Netherlands and the Nordics are strongly opposed to new budget lines to stabilise economies, stating that sound fiscal policies would be sufficient to provide stabilisation during times of crisis.

Our verdict: Still a long way to go but a small budget line in the EU’s multi-annual fiscal framework as a kind of “money for reforms” or conditional cross-border investments fund looks feasible.

Here, the most important additional proposal to the already agreed upon measures by the French and German governments is that the ESM should be the backstop to the Single Resolution Fund. After the Eurogroup meeting, there is now a deal. This should take the form of a credit line and would not be bigger than the current size of the SRF, which is now around €55 billion.

In terms of a European deposit insurance scheme (EDIS), the French-German proposal already showed that the ambition level has been lowered and the Eurogroup meeting did not bring any change. A statement that “after the European Council in June, the work on a roadmap for beginning political discussions on EDIS could start” is not really promising.

Our verdict: Making the ESM a financial backstop for bank resolution is a done deal. EDIS is clearly on a backburner.

All this means that European leaders will still have lots of unfinished work when they meet on Thursday.

On a positive note, at least there is some progress. On a more negative note, however, there still seems to be more disagreement than agreement and the rest of the eurozone countries have clearly shown the limits of the French-German axis.