The latest FOMC minutes were... mixed. The discussion between hawks and doves continues giving gold no comfort. Who will gain the upper hand?

Yesterday, the FOMC published the minutes from its last meeting in June. Investors who counted on some clear clues are probably disappointed, as the minutes can please both hawks and doves. Indeed, the report showed that the Fed officials are divided on their inflation outlook and the appropriate course of action. The dovish side believes that the recent high inflation readings are transitory and they will ease in the not-so-distant future, while the hawkish camp worries that the upward pressure on prices could continue next year:

Looking ahead, participants generally expected inflation to ease as the effect of these transitory factors dissipated, but several participants remarked that they anticipated that supply chain limitations and input shortages would put upward pressure on prices into the next year. Several participants noted that, during the early months of the reopening, uncertainty remained too high to accurately assess how long inflation pressures will be sustained.

Importantly, most FOMC members recognized that the risks to inflation forecasts leaned more to the upside. This means that the hawkish shift is indeed real, although the Fed will remain very accommodative:

Although they generally saw the risks to the outlook for economic activity as broadly balanced,a substantial majority of participants judged that the risks to their inflation projections were tilted to the upside[emphasis added] because of concerns that supply disruptions and labor shortages might linger for longer and might have larger or more persistent effects on prices and wages than they currently assumed. Several participants expressed concern that longer-term inflation expectations might rise to inappropriate levels if elevated inflation readings persisted. Several other participants cautioned that downside risks to inflation remained because temporary price pressures might unwind faster than currently anticipated and because the forces that held down inflation and inflation expectations during the previous economic expansion had not gone away or might reinforce the effect of the unwinding of temporary price pressures.

As a consequence of fast economic growth and higher inflation than expected, some participants suggested that it would be appropriate to taper the quantitative easing and hike the federal funds rate sooner than previously thought. Or, to be at least prepared if higher inflation turns out to be more persistent than the consensus sees it:

In light of the incoming data and the implications for their economic outlooks, a few participants mentioned that they expected the economic conditions set out in the Committee's forward guidance for the federal funds rate to be met somewhat earlier than they had projected in March (...)

Various participants mentioned that they expected the conditions for beginning to reduce the pace of asset purchases to be met somewhat earlier than they had anticipated at previous meetings in light of incoming data (...)

Participants generally judged that, as a matter of prudent planning, it was important to be well-positioned to reduce the pace of asset purchases, if appropriate, in response to unexpected economic developments, including faster-than-anticipated progress toward the Committee's goals or the emergence of risks that could impede the attainment of the Committee's goals.

However, despite all these hawkish commentaries, the majority of FOMC members remains extremely cautious and believe that the economy has still a long way to achieve the Fed’s targets, especially full employment:

Many participants remarked, however, that the economy was still far from achieving the Committee's broad-based and inclusive maximum-employment goal, and some participants indicated that recent job gains, while strong, were weaker than they had expected.

So, given that the economy hasn’t yet fully recovered, inflation will likely be just transitory, and there is high uncertainty about the economic outlook, it would be premature to tighten the monetary policy and raise the interest rates:

Participants generally agreed that the economic recovery was incomplete and that risks to the economic outlook remained. Although inflation had risen more than anticipated, the increase was seen as largely reflecting temporary factors, and participants expected inflation to decline toward the Committee’s 2 percent longer-run objective (...)

Several participants emphasized, however, that uncertainty around the economic outlook was elevated and that it was too early to draw firm conclusions about the paths of the labor market and inflation. In their view, this heightened uncertainty regarding the evolution of the economy also implied significant uncertainty about the appropriate path of the federal funds rate (...)

What do the recent FOMC minutes imply for gold? Well, in some sense, not so much. The minutes don’t include any revolutionary insights we are not aware of. Moreover, they lacked any clear guidelines about the future US monetary policy, as we could find both hawkish and dovish remarks in them.

And indeed, the price of gold was little changed in the aftermath of the FOMC minutes, and it remained slightly above $1,800 it reached the day before (see the chart below). 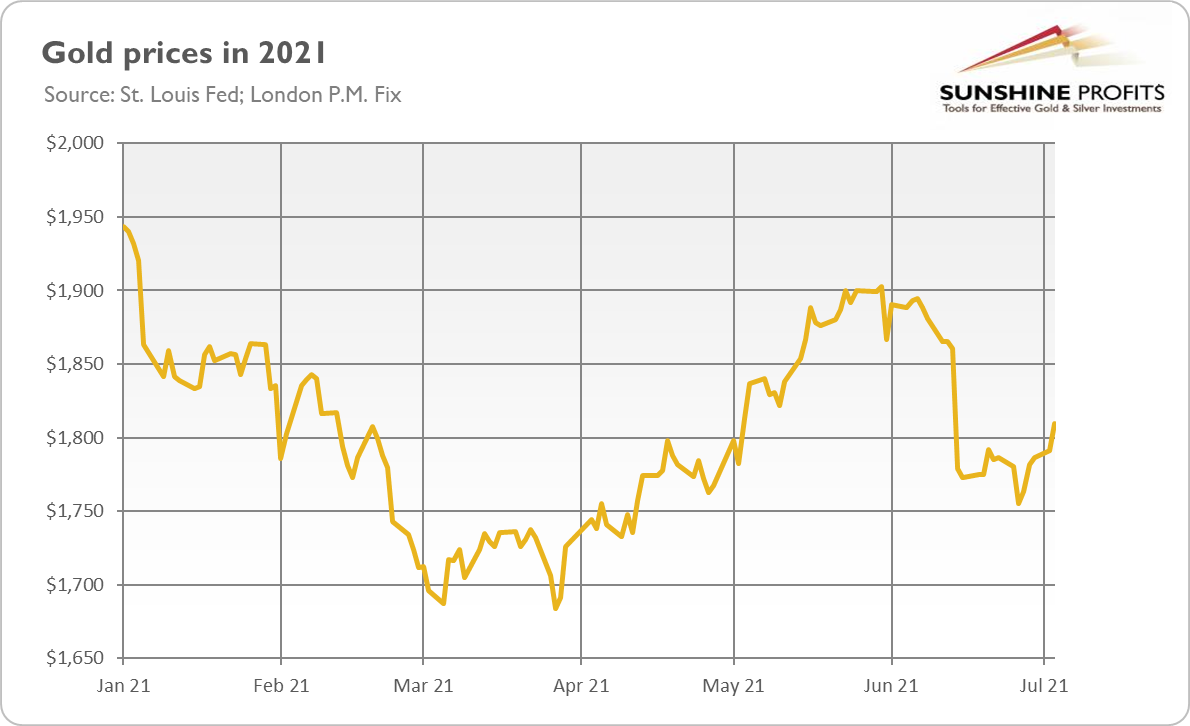 However, the minutes haven’t offered any significant dovish counterweight to the recent hawkish statement and the dot-plot. The statement is often more aggressive than nuanced and soft. Hence, although the minutes do show the discussion among the Fed’s officials, the hawkish shift is real. Perhaps the most important part of the document is the paragraph about the transition into a post-pandemic world.

Members judged that the economic outlook had continued to improve and that the most negative effects of the pandemic on the economy most likely had occurred. As a result, they agreed to remove references in the FOMC statement that noted that the virus was "causing tremendous human and economic hardship" and that "the ongoing public health crisis continues to weigh on the economy." Instead, they agreed to say that progress on vaccinations had reduced the spread of COVID-19 and would likely continue to reduce the negative economic effects of the public health crisis.

So, although the recovery is not completed and the economy hasn’t reached the Fed’s goals yet, the normalization of the US monetary policy has begun. It’s a fundamentally negative development for the gold market. Of course, gold bulls may find some comfort in the fact that it will still take at least a few meetings to develop and announce a plan of tapering the asset purchases; the interest rates cycle will start only later. Another positive factor is, of course, that gold managed to stay above $1,800 despite the lack of any clear dovish signals in the minutes.

Nonetheless, the Fed’s hawkish U-turn – unless reversed because of another economic crisis, or unless accompanied by stagflation – should imply higher bond yields, a stronger greenback, and, thus, weaker gold.

In other words, the minutes won’t change the current market narrative, which assumes that the economic recovery is on track while inflation is just transitory. As a reminder, the latest job gains were surprisingly strong, which moves the US economy closer to full employment. Such a narrative implies strong economic confidence and limited demand for safe-havens such as gold.