The Fed concludes its 2-day meeting today and releases its policy statement and new Summary of Economic Projections (SEP) at 18:00 GMT. The market will focus closely on the statement and ensuing press conference for further insights on the inflation targeting framework and discussion of other possible policy actions.

Chair Powell will hold his press conference from 18:30 GMT. He largely preempted this meeting in terms of policy with his Jackson Hole announcement of the FOMC’s new strategies where it will pursue an average inflation target and monitor any shortfall in employment. The Fed had already indicated, and reiterated it’s interest rate posture would be on hold for years into the future, but it’s now codified.

Hence, attention will be on the Fed’s revised forecasts, which will likely show out-sized boosts in the official 2020 GDP forecasts, followed by a smaller 2021-23 bounce. The statement  is expected to show upward revisions to GDP and inflation outlooks, and a downward bump to unemployment.  The GDP is seen at a central tendency boost to the -3.6% to -3.2% area, from the prior central tendency of -7.6% to -5.5%.

The dot plot should show no rate hikes through 2023. No changes are anticipated to forward guidance currently, or to QE, as the Fed takes a more wait and see approach for now. Indeed, a number of Fedspeakers have suggested action on forward guidance would be “premature.”

In the following, we summarize economic developments that have occurred since the last FOMC meeting in July regarding the labor market, inflation and consumption.

The Labor Market : Payrolls started 2020 on a firm footing, but once COVID-19 disruptions hit in March, payrolls collapsed. The unemployment rate had been holding near the cycle-low 3.5% seen in February, before surging to 4.4% in March and peaking at 14.7% in April. The y/y average hourly earnings gauge was lifted sharply in April by the shift in the compositional mix of jobs with the shutdowns, as layoffs were heavily concentrated among low-wage employees.

Wage growth settled into a sustained rate near 3% between 2018 and early-2019, before the spike starting in March from the mass layoffs of low-paid workers that changed the mix of employment. A 3.0% y/y rise for wages in February was followed by gains of 3.4% in March and 8.0% in April, before the May drop-back to 6.6% and now to 4.7% as of August.

Inflation: The bounce in oil prices since the COVID-related plunge allowed a 0.6% headline CPI gain in both June and July before a slightly smaller 0.4% rise in August. The Fed’s favored inflation gauge, the PCE chain price measure, will likely post August y/y gains of 1.2% for the headline and 1.5% for the core, following respective July increases of 1.0% and 1.3%. April marked a trough for inflation measures, and these gauges will likely bounce further in July. The FOMC’s median estimates from June’s meeting are 0.8% for the headline and 1.0% for the core in 2020.

There is little room for further policy action at the September FOMC meeting given the 150 basis points of inter-meeting rate cuts this spring that left rates at the zero lower-bound. Guidance will be sought on further action in the future, as COVID-19 impacts work their way through the economic data, leaving an elevated jobless rate and inflation figures that will take a long time to make up for target undershoots through most of the last expansion. 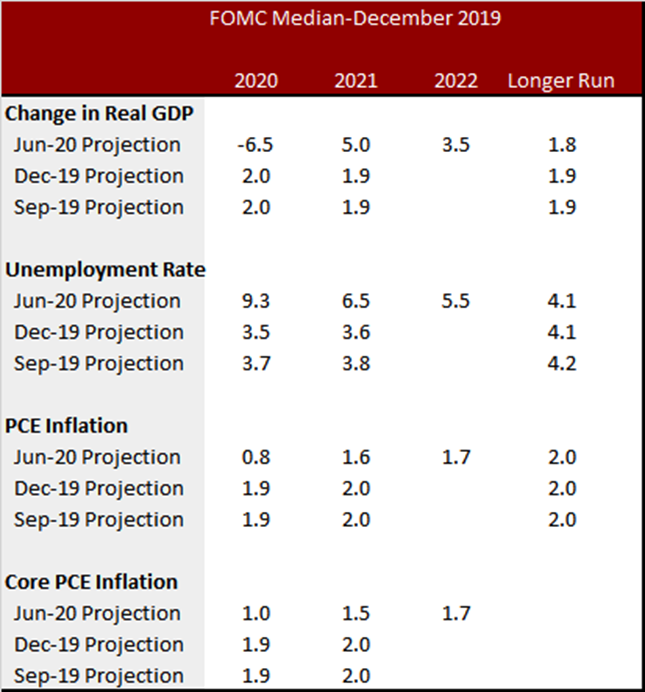