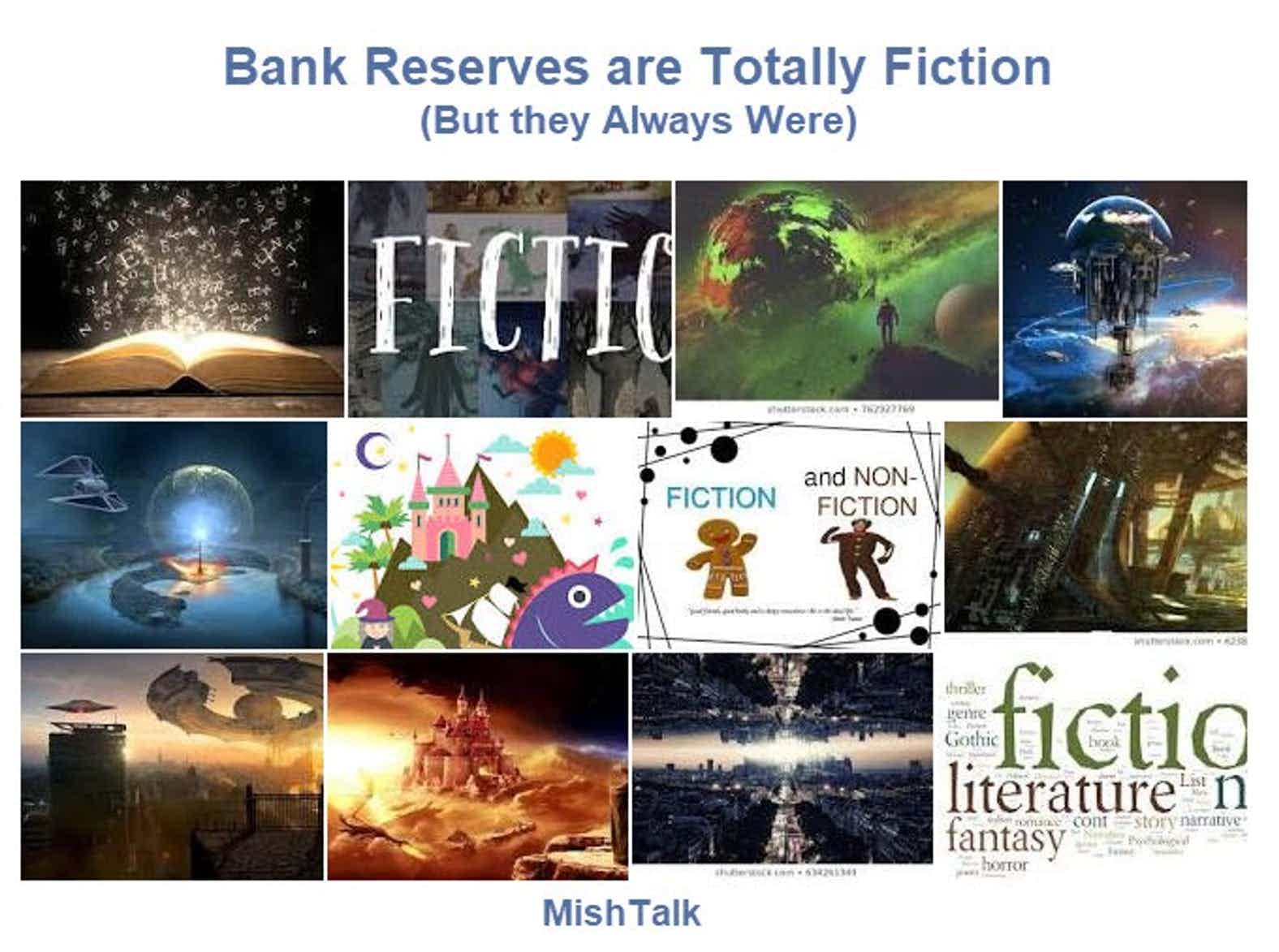 fficial policy finally caught up with reality. Reserves are fictional.

With little fanfare or media coverage, the Fed made this Announcement on Reserves.

Amusingly, a few days ago yet another article appeared explaining how the Money Multiplier works. The example goes like this: Someone deposits $10,000 and a bank lends out $9,000 and then the $9,000 gets redeposited and 90% of the gets lent out and so an and so forth.

The notion was potty. That is not remotely close to how loans get made. Deposits and reserves never played into lending decisions.

The announcement just officially admitted the denominator on reserves for lending is zero.

There are no reserve lending constraints (but practically speaking, there never were).

I wrote about this in December of 2009 in Fictional Reserve Lending and the Myth of Excess Reserves.

The flashback is amusing as I reference a number of people worried about hyperinflation.

Here are the facts of the matter as I explained in 2009.

When Do Banks Make Loans?

All three requirements must be met.

Point two is worthy of discussion.

Banks may not have a creditworthy borrower, they just have to believe it, or they have an alternate belief that applies. In 2007 banks knew full well they were making mortgage liar loans.

So Why Did They?

Because banks bought into the idea home prices would not go down so they did not give a rat's ass if someone was out on the street. All they cared about was the quality of the loan. If Home prices appreciated, they were covered.

From a bank lending aspect, nothing has changed. Neither reserves nor deposits never entered into the picture.

The denominator on lending is now officially zero. But nothing really changed. The Fed was always ready, willing, and able to supply unlimited reserves.

The only thing that's new is the official announcement that reserves are fictional.

There are capital concerns, but note that in March of 2009 the Fed suspended mark-to-mark accounting.

That was the key announcement that launched the bull market.

There are still capital concerns, but the Fed stepped up to the plate and is willing to buy corporate bonds.

Guess who is going to unload as much questionable junk as possible and guess who will buy it.

Banks know they have losses but hey will not admit them.

What About New Lending?

To achieve real growth we need new production, not hiding of losses.

Once again, the Fed has chosen to hide losses and shelter zombie corporations.

This will be a drag on any recovery.

Hey, look on the bright side.

But banks are saved. What more could you possibly want?

Meanwhile, Nothing is Working Now (Except for Banks)

For a 20-point discussion of where we are headed, please see What's Next for America?

The greenback firmed up at the end of the week, closing it with substantial gains against most major rivals. Renewed coronavirus concerns and poor macroeconomic data spurred risk-off. EUR/USD is firmly bearish.

GBP/USD: Further restrictions in the UK may hit the pound

The GBP/USD pair trimmed most of its weekly gains on Friday and settled in the 1.3580 price zone, amid risk-off fueling dollar’s demand. UK GDP contracted by less than anticipated in November, Industrial Production plunged.