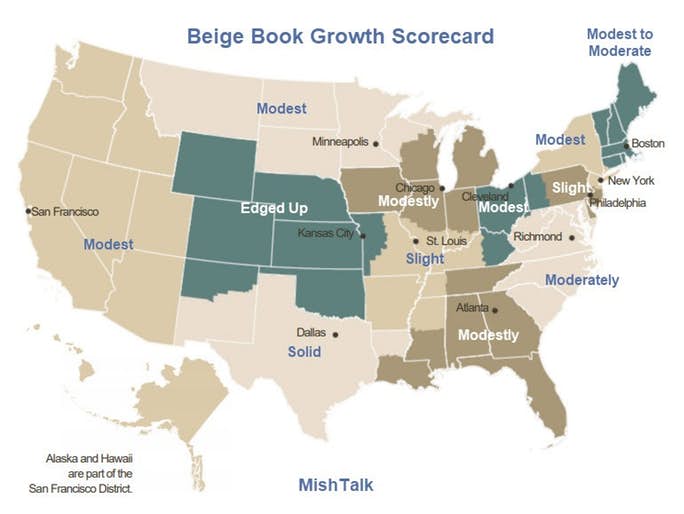 The Fed's "Beige Book" is a compilation of economic activity by each of twelve Federal Reserve districts produced approximately two weeks before each FOMC rate setting meeting.

The next FOMC rate setting meeting will be on January 29.

Economic activity generally continued to expand modestly in the final six weeks of 2019. The Dallas and Richmond Districts noted above-average growth, while Philadelphia, St. Louis, and Kansas City reported sub-par growth. Consumer spending grew at a modest to moderate pace, with a number of Districts noting some pickup from the prior reporting period. On balance, holiday sales were said to be solid, with several Districts noting the growing importance of online shopping. Vehicle sales generally expanded moderately, though a handful of Districts reported flat sales. Tourism was mixed, with growth reported in the eastern seaboard Districts but activity little changed in the Midwest and West. Manufacturing activity was essentially flat in most Districts, as in the previous report. Business in nonfinancial services was mixed but, on balance, growing modestly. Transportation activity was also mixed across Districts, with a majority reporting flat to weaker activity. Banks mostly characterized loan volume as steady to expanding moderately. Home sales trends varied widely across Districts but were flat overall, while residential rental markets strengthened. Some Districts pointed to low inventories as restraining home sales. New residential construction expanded modestly. Commercial real estate activity varied substantially across Districts. Agricultural conditions were little changed, as was activity in the energy sector. In many Districts, tariffs and trade uncertainty continued to weigh on some businesses. Expectations for the near-term outlook remained modestly favorable across the nation.

Employment was steady to rising modestly in most Districts, while labor markets remained tight throughout the nation. Most Districts cited widespread labor shortages as a factor constraining job growth and, in a few cases, business expansion. A few Districts noted brisk demand for professional, technical, and managerial workers. A number of Districts reported job cuts or reduced hiring among manufacturers, and there were scattered reports of job cuts in the transportation and energy sectors. Wage growth was characterized as modest or moderate in most Districts—similar to the prior reporting period—and there were scattered reports of wage increases from year-end hikes in minimum wages. A few Districts also noted the use of benefits, incentives, training programs, and automation to reduce vacancies.

Prices continued to rise at a modest pace during the reporting period, as did input costs. A number of Districts reported that retail selling prices rose at a slightly faster, but still subdued, pace. A few Districts indicated that some businesses were passing along tariff costs to consumers—mostly in retail but also in construction. Some Districts noted that restaurants were being pressured by rising food prices. There were scattered reports of declining prices in some manufacturing industries, as well as in the energy sector. Those Districts reporting on price expectations indicated that prices were expected to continue to rise in the months ahead.

The report is mostly just a recompilation of various regional reports with a few extra anecdotes tossed in.

Nine States Projected to Contract in 2020: More on the Way

A Philadelphia Fed report projectes Nine States to Contract in 2020. I commented "More on the Way."

Pennsylvania, New Jersey, and Delaware are in the Philadelphia Fed region. Here's the Beige Book synopsis for Philadelphia:

Given that Manufacturing ISM Down 5th Month to Lowest Since June 2009 it's no surprise to see the manufacturing is struggling nationally.

Despite purported "widespread labor shortages" and "modest or moderate wage growth" please note that Real Wages Decline in December, Barely Up From Year Ago.