Sell in May and go away? For King Dollar, this adage on stock markets may be the way to go – albeit for a short time. The greenback has surged throughout April as investors have been increasing their expectations for aggressive action by the Federal Reserve. It may now be time for a "buy the rumor, sell the fact," which may prove a "buy the dip" opportunity on the greenback.

If all this jargon seems confusing, I will make the argument for buying the dollar after the Fed decision in the baseline scenario, and detail three other options. Let's go.

Background: the economy is on fire

The price we are paying at the pump pokes our eyes on billboards, but that phenomenon is global. What makes America exceptional when it comes to inflation is core prices – those excluding energy and food. Underlying inflation hit a high of 6.5% YoY in March.

Companies feel that they can transfer rising costs to consumers, who are not only willing to pay but are also able – wages are up 5.6% YoY. While we would all enjoy pay rises, if everybody gets them, more money is spent and prices rise too quickly. The Fed aims to cool an overheating economy.

Will the bank's action hurt the labor market? Perhaps, but America's issue is job shortage, not unemployment, so Fed Chair Jerome Powell has some room to cool the "very tight" labor market without triggering a recession. At least that is the hope.

Even without agreeing with the arguments, I have written above, the outcome of the Fed meeting is mostly known, because Fed officials already told us. Powell said he intends to raise interest rates by 50 bps in the May meeting. It is fully priced into the dollar.

Will the Fed also squeeze its balance sheet? Yes, as the Meeting Minutes from March revealed that the bank intends to let up to $95 billion worth of bonds and Mortgage-Backed Securities (MBS) mature without the proceeds being reinvested. This process is also known as Quantitative Tightening, or as I prefer calling it – the opposite of printing money. 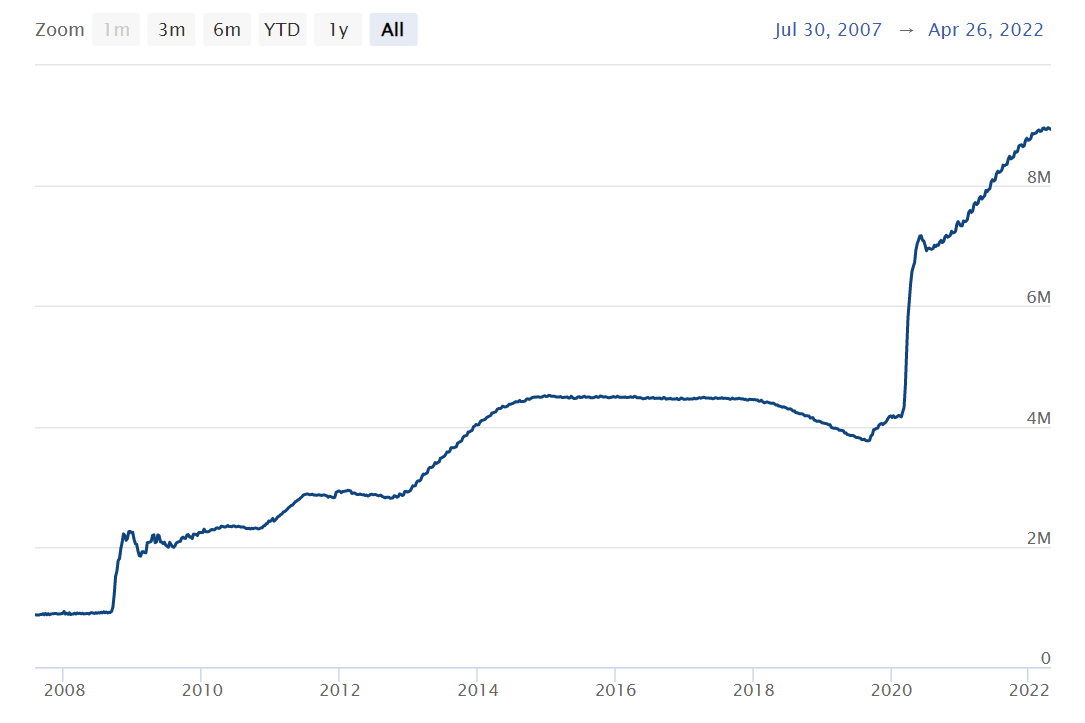 As mentioned, both steps are priced in, and the dollar depends on what Powell and his colleagues hint about the future, and less on what they do.

Here are my four scenarios and potential outcomes.

In this case, the Fed follows through on promises but refuses to make commitments about the next moves. Such an approach is in line with Powell's phrase of staying "nimble and humble" – he got it wrong on transitory inflation, and cannot make big promises.

In this case, the dollar would initially drop on a "buy the rumor, sell the fact." A small portion of April's massive greenback surge would be undone as uncertainty about the Fed's May decision becomes a certainty coupled with the lack of further action.

However, such a "sell the fact" of the dollar would also turn into a "buy the dip" opportunity. Why? The dollar advanced not only in response to hawkish Fed expectations but also to safe-haven flows related to Russia's war in Ukraine and China's covid-related lockdowns. Nothing has changed on those fronts.

Even if we assume that these international issues are also fully in the price, which currency would we buy? All the others have their limits, while the Fed could continue raising rates as long as inflation increases.

Bottom line: dollar-negative certainty about May's decision would swiftly make way for uncertainty about the next moves + a "there is no alternative" (TINA) approach.

The dollar is on a roll:

Hawkish: Same, but with an open door to even more aggressive action

In this scenario, the dollar would not even offer a dip to buy – the only way would be up. The Fed would not only fulfill its pledge, but promise to do more, and soon. Bond markets have been pricing a 75 bps hike for June amid a nonstop influx of inflationary signs. By refusing to deny it, Powell would further boost the dollar.

The Fed could go even further by suggesting even more aggressive action in its statement. A similar, immediate outcome could happen if James Bullard, the most hawkish member, votes for a 75 bps move now – or was even joined by another colleague.

The dollar would rise even faster and stronger in this hawkish scenario.

Dovish: Same, but with hints that inflation is near the peak

There was one silver lining in March's Consumer Price Index report – Core CPI rose by only 0.3% MoM. This relatively modest rise in underlying inflation might have been a one-off and the overall picture coming from other official measures and surveys is of an overheating economy. But maybe it wasn't a one-off.

I have heard several times on financial media that "high prices are the cure to high prices" – when inflation rises, consumers sit on their hands, and costs eventually fall. Has inflation already peaked?

If Powell suggests that he and his colleagues are examining signs that price rises are already decelerating, they would send the dollar tumbling down. It would imply that the next hikes would be moderate. Moreover, it would signal to investors that the Fed's high point in interest rates would be lower than previously anticipated, thus denying the dollar a substantial part of its relative advantage.

The probability of such a move is low, as inflation remains high and the Fed is a slow-moving institution that needs more data and time to make shifts in its thinking.

As I have mentioned earlier, there is less certainty about the QT program. While the minutes point to an advanced internal discussion, the decision could be different. The Fed's balance sheet is not only a tool of monetary policy – more money means more support, less means tightening – but also serves as a signaling one for interest rates.

The bank might opt to support battered financial markets by leaving more money to slosh around while raising interest rates to battle inflation. I find this logic somewhat twisted, but it is essential to note that the Fed watches the S&P 500 closely. It might want to refrain from extremely aggressive action by squeezing the balance sheet by only $40 or $50 billion per month.

Contrary to an intent to be less hawkish, such a move would only cause confusion for the dollar, at least in the initial response. It would undermine the balance sheet's role as a rate signaling tool. However, once the dust settles, the greenback could return to focusing on Russia and China, regaining some ground.

This hard-to-trade scenario has a low probability, but it cannot be ruled out.

The Fed is at a critical crossroad in its battle to fight inflation, raising rates by more than 25 bps for the first time in a decade and a half. For the dollar, it would mean a temporary "uncanny valley" – a "sell the fact" dip before it returns to the broad uptrend. In (almost) every scenario.