It was a great week for the greenback, with the EUR/USD pair plummeting to 1.1951 and finishing the week around the 1.2000 figure. The run towards fresh 2021 lows was triggered by persistent optimism about a large, new US stimulus package of $1.9 trillion, with Democrats moving to pass US President Joe Biden’s bill without Republican support. Worth noting that despite such move Biden and Republican senators are engaged in negotiations to find common ground.

Most of the dollar’s strength came from rising US Treasury yields, which maintain their positive momentum on Friday, despite tepid employment figures. The yield on the benchmark 10-year Treasury note peaked at 1.188%, its highest since March 2020, now hovering around 1.16%.

The shared currency found some demand ahead of the weekly close, amid a disappointing US Nonfarm Payroll report, but the intraday advance could also be attributed to profit-taking. The country added just 49K new jobs in January, while the December headline was downwardly revised to -227K from -140K. The unemployment rate contracted to 6.3%, better than anticipated, while the participation rate was down from 61.5% to 61.4%.

Data was tepid also in Europe. German Retail Sales fell by 9.6% in December, much worse than anticipated, while Factory Orders in the same month resulted at -1.9%, also missing expectations. The EU published the preliminary estimate of its Q4 GDP, which printed at -0.7%, better than expected but far below the previous 12.5% advance.

Growth-related data failed to impress on both shores of the Atlantic. Markit published the final versions of its January PMIs, revising higher manufacturing and services output. The latter, however, was confirmed in contraction territory as a result of the latest lockdowns in the Union.

On the pandemic front, there were several positive news this week. The Lancet published data from the Russian shot developed by Gamaleya, showing effectiveness of over 91%. AstraZeneca announced its product is over 70% effective if the second dose is applied twelve weeks after the first one. Finally, Johnson and Johnson applied before the FDA for emergency use of its one-shot vaccine, believed to be roughly 66% effective in preventing contagions. Despite delivery delays in the Union, the increased number of tools meant to fight the virus brought some confidence among speculative interest.

The next week will be much lighter in terms of macroeconomic data, as most of the scheduled releases tend to have no impact on prices. Wednesday is the day, as Germany and the US will post updates on January inflation.  On Friday, the US will release another first-tier figure, the preliminary estimate of the February Michigan Consumer Sentiment Index.

Market participants will likely remain focused on US stimulus developments, and whether Democrats will be able to pass President Biden’s huge aid-package.

Bears on the EUR/USD haven’t given up, but it's also true that the long term way towards a steeper decline is quite long. The weekly chart shows that the pair barely bounced from the 50% retracement of its November/January rally, where EUR/USD also has its 20 SMA. In the mentioned time frame, the Momentum indicator seesaws within positive levels, while the RSI indicator keeps easing, approaching its midline. The longer moving averages are maintaining their bullish slopes well below the current level.

In the daily chart, the pair is developing below a firmly bearish 20 SMA but also bouncing from its 100 SMA. Technical indicators recovered from their weekly lows, but lack enough bullish momentum to suggest another leg north, still developing within negative levels.

Bulls may have better chances if the pair recovers above 1.2060, the 38.2% retracement of the mentioned rally. The next relevant resistance is the 1.2100 level, followed by the 1.2170/80 price zone. Below the weekly low, 1.1885, the next Fibonacci support is the main one to watch as if it finally gives up, the decline has room to continue towards the 1.1600 threshold. 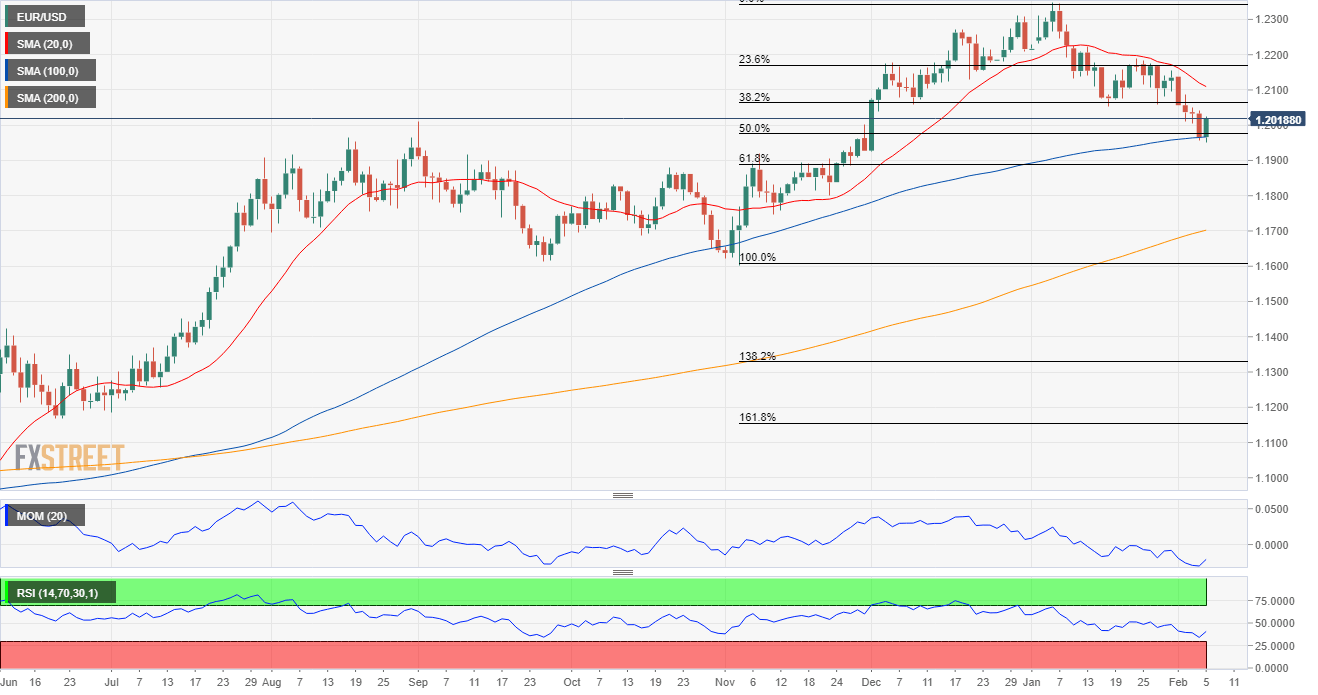 According to the FXStreet Forecast Poll, the greenback will retain its strength throughout the upcoming week, but the pair may resume its advance afterwards. 69% of the polled experts are betting for a decline in the near term, but bulls are a majority int he monthly and quarterly views, with the pair seen on average at 1.2045 and 1.2103 respectively.

However, the Overview chart paints a different picture. The three moving averages present firm bearish slopes, somehow suggesting possible lower targets ahead. In the monthly view, there are a large number of possible targets accumulated between 1.16 and 1.20, although such bearish intentions recede in the longer-term, with most targets accumulating between 1.20 and 1.24.