The BOE has shut the door on negative rates – allowing the pound to fight back against the soaring dollar. How big will America's stimulus package be? That is a critical question for the greenback, while the pound relies on British vaccines and growth figures.

Finally, some clarification – the Bank of England will continue working on the technicalities of negative rates, but it has also assured investors that the topic is off the table. BOE Governor Andrew Bailey and his colleagues have also raised their estimate for growth in the fourth quarter of 2020 – raising the base for future gains. Alongside an acknowledgment of vaccines' positive impact, the pound staged a rally.

GBP/USD kicked off that rally from a low point after the US dollar stormed the board. While President Joe Biden discussed compromises with Republicans and moderates in his own party – Democrats in Congress advanced legislation that would allow them to pass the full $1.9 trillion package. That has raised expectations for a larger relief package.

The US gained 49,000 jobs in January, somewhat below expectations, which had been rising due to upbeat leading indicators earlier in the week. Nevertheless, the Unemployment Rate dropped to 6.3%, an encouraging development.

The BOE and the dollar storm somewhat overshadowed positive developments in beating the virus on both sides of the Atlantic, where the winter wave is receding. In the UK, it can already partially be attributed to the country's vaccination campaign. 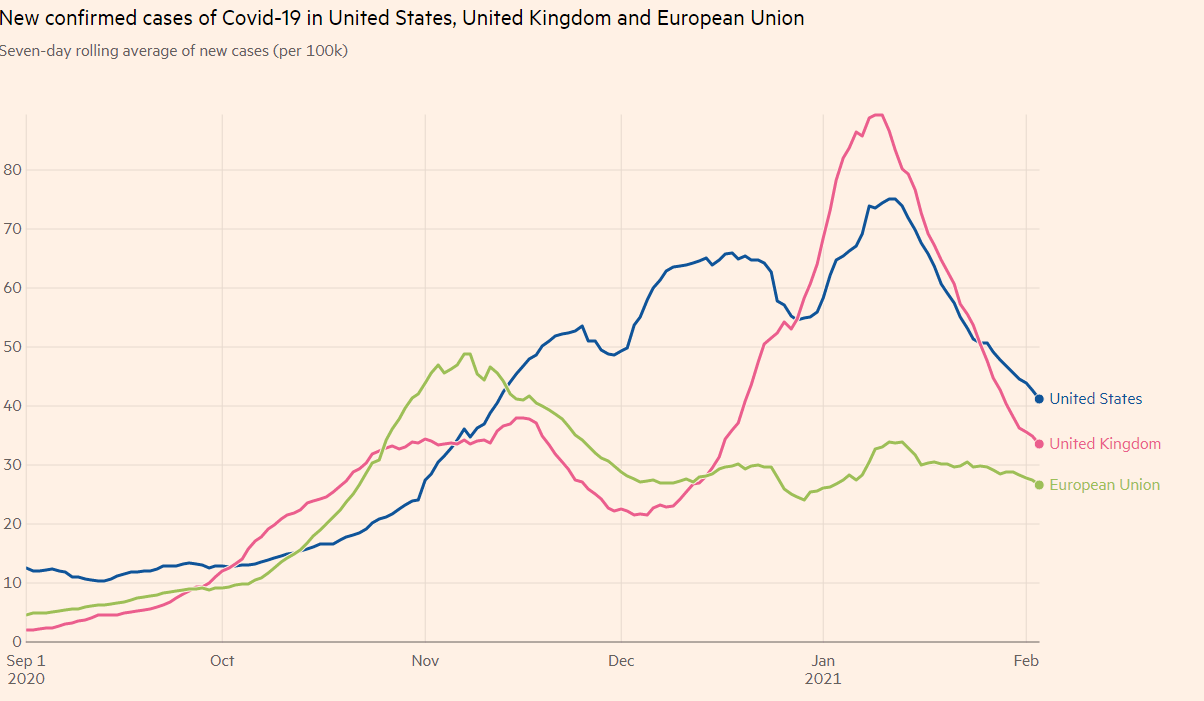 When will Britain exit the current lockdown? The government initially circled mid-February on the calendar and any opening depends on massive immunization. AstraZeneca's jabs – used in large quantities in the UK – proved more efficient when stretching the time between the doses. That allows Britain to reach more people.

After topping 500,000 injections per day and reaching over ten million people, the UK seems to be on course for an early easing of restrictions. Any such announcements by the government may boost the pound.

In Israel, the world's leader in inoculations, there are clear signs of decreased severe illness and hospitalizations among the over 60s, prioritized early in the campaign. 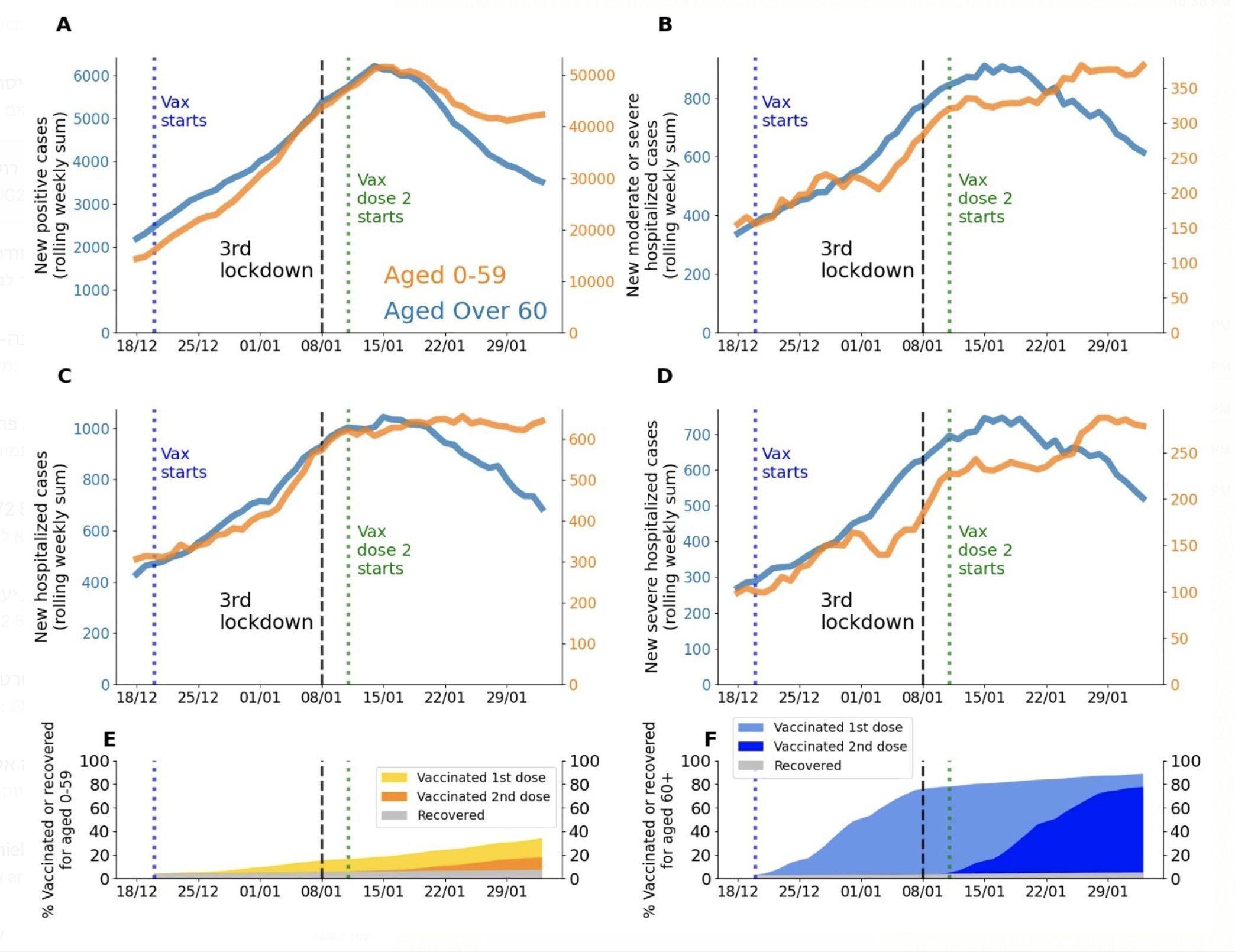 While the EU's clash with AstraZeneca brought Brexit back to the spotlight, investors are more interested in talks around the services sector, which will be protracted and on the back burner for now.

The economic calendar features another speech from Bailey, but he is unlikely to provide additional insights immediately after "Super Thursday." More importantly, investors will watch if his optimism on how 2020 ended is vindicated.

The UK releases Gross Domestic Product figures for the fourth quarter, including an update on December, when the government imposed restrictions on London. Industrial output figures for the last month of the year are also of interest.

US events: How big will stimulus be?

Former President, Donald Trump's trial, is scheduled to begin and that may push Democrats to rapidly approve a large package – even without any Republican support. That is the optimistic scenario for markets. In such a case, the dollar would have more room to rise alongside yields.

The other, and perhaps more realistic option, is that negotiations with moderates from both parties extend for another week or two, somewhat eroding the greenback's gains.

The US has ramped up its vaccination campaign to a pace of around 1.3 million shots per day. According to this chart, America is on course to reach 50% of its population by Independence Day. Any acceleration would be welcome, while a setback would weigh on the greenback. 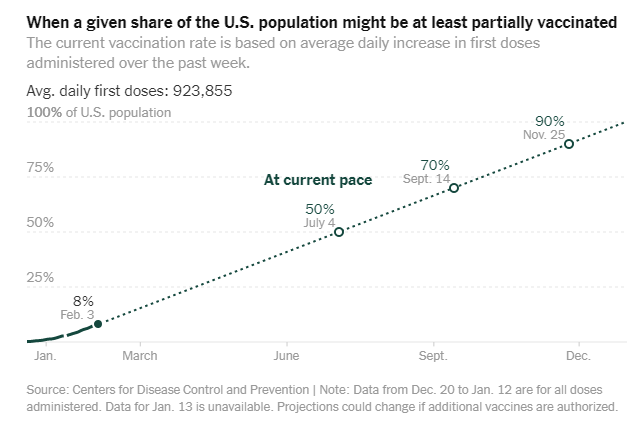 Investors will likely be digesting the Nonfarm Payrolls figures early in the week before examining consumer prices on Wednesday. Inflation has likely edged up but remained subdued in the reading for January, without pushing the Federal Reserve to action.

Thursday's jobless claims are of interest after they dropped for consecutive weeks. The University of Michigan's Consumer Sentiment Index likely edged up from in the preliminary read for February. Stimulus checks from the previous package, the receding disease, and more vaccines have likely contributed to a better mood.

Pound/dollar has been holding onto its uptrend despite some range trading. The currency pair has bounced from the 50-day Simple Moving Average and remains well above the 100-day and 200-day SMAs. Momentum also remains to the upside.

All in all, bulls are in full control.

Assuming Biden will not get a large package passed imminently, the pound has room to benefit from upbeat GDP figures and a robust immunization campaign.

The FXStreet Forecast Poll is pointing to short-term gains for GBP/US but a moderate decline afterward. Experts have downgraded all average targets in the past week, albeit only modestly. It seems that the mood is cautiously optimistic. 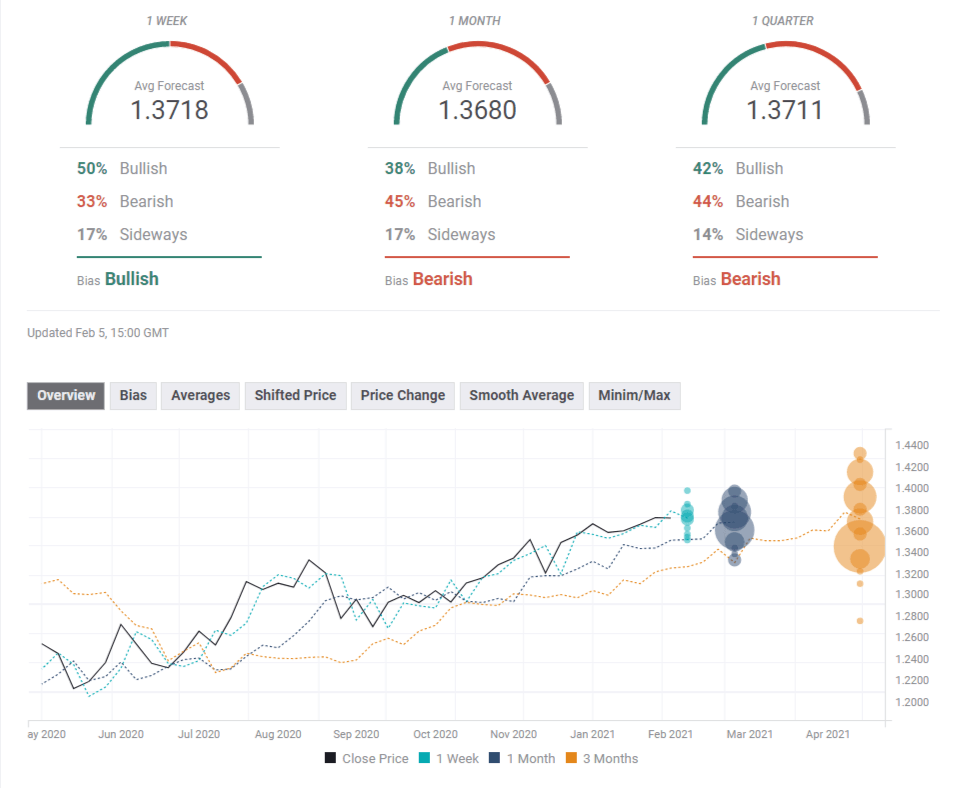