It was a dull week for AUD/USD in terms of price action, as, after gapping lower at the opening, it is closing it unchanged in the 0.7610 price zone. The greenback was the clear weekly winner, appreciating sharply against most of its major rivals. Aussie’s declines were limited by the equities positive momentum, as Wall Street flirted with record highs.

Market players were optimistic amid progress in US President Joe Biden’s stimulus package. Biden proposed a $1.9 trillion which Republicans want to scale back. They counter-proposed a $600 billion package, yet, while negotiations continue, Senate Democrats pushed forward a budgetary manoeuvre that could allow them to pass Biden’s bill without Republicans’ support.

Meanwhile, recent data shows that the trade war between Beijing and Canberra is not affecting the Australian economy. Tensions began when Australia called for an international investigation into the origins of the coronavirus pandemic, to which China responded by restricting imports of multiple commodities coming from the rival country. Prices of such commodities in the Asian giant have seen sharp increases, while Australia has managed to locate its goods in other neighbour countries such as India and Thailand.

Australian resilience to the ongoing global crisis is an upward factor for the aussie, as the country keeps controlling COVID-19 contagions. Just this week, news came out that a case was detected in a hotel worker, resulting in a five-day lockdown in the Pert area. On Friday, the country reported just six new cases, all of then quarantined in hotels.

The main event in Australia was the Reserve Bank of Australia monetary policy decision. As widely anticipated, policymakers left the official cash rate at 0.1%, while policymakers reiterated that rates wouldn’t be hike until inflation reaches the central bank’s target. “For this to occur, wage growth will have to be materially higher than it is currently. This will require significant gains in employment and a return to a tight labour market. The board does not expect these conditions to be met until 2024 at the earliest,” Governor Philip Lowe said.

Additionally, the central bank announced it would extend its QE program, with additional bond purchases at a $5 billion pace per week, once the current program ends in three months. The news took a toll on the AUD, sending it to a weekly low of 0.7563, also the lowest level for this 2021.

Data wise, the country published the AIG Performance of Manufacturing Index, which improved in January to 55.3 from 52.1 in December. The services index resulted at 54.3, up from the previous 52.0. January TD Securities Inflation held at 1.5% YoY, while housing-related data indicated improvement in the sector. The December Trade Balance posted a surplus of 6.785 million, while Retail Sales in the same month were down 4.1%.

In the US, the focus was on employment data, with positive hints ahead of the release of a tepid Nonfarm Payroll report on Friday, which showed that the country added just 49K new jobs in January.

Also, the US published the official ISM PMIs for January. Manufacturing and services output remained in expansion territory, although the indexes contracted from December readings, missing the market expectations.

On the other hand, the US has a lighter week, with January inflation data and the preliminary estimate of the February Michigan Consumer Sentiment Index being the main releases.

Ever since reaching a multi-year high of 0.7819 early on January, the pair has been in retreat mode. Weekly basis, lower lows and lower highs suggest that the pair will keep on falling. Technical readings indicate that, while the momentum keeps receding, bulls are still holding the grip.

The pair is developing above all of its moving averages, with the 20 SMA still advancing above the larger ones. Technical indicators remain within positive levels, lacking directional strength, but holding near their recent highs.

In the daily chart, on the contrary, the risk is moderately skewed to the downside, as the pair has remained below a bearish 20 SMA, while the 100 SMA loses bullish momentum far below the current level. Technical indicators are recovering from weekly lows, but remain below their midlines, reflecting a limited buying interest. 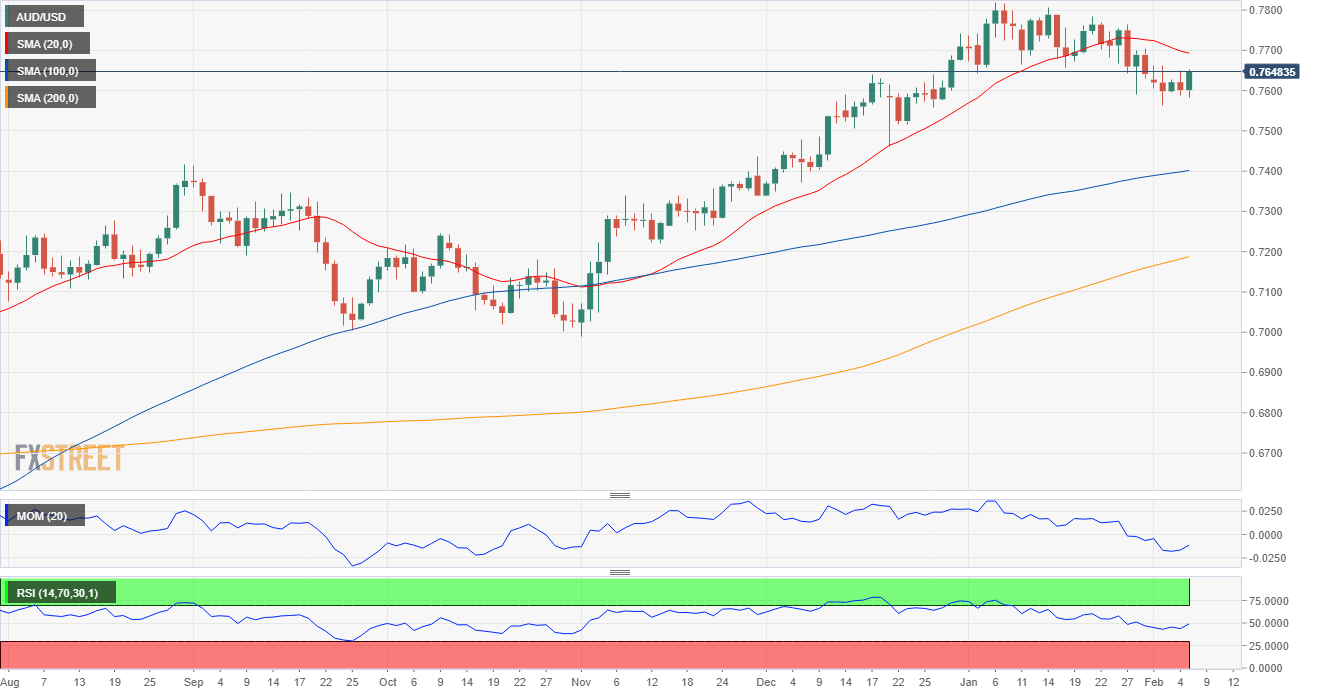 The FXStreet Forecast Poll indicates that bears dominate the pair, as it is expected to fall in all the time-frame under study. Anyway, it also shows that bearish pressure eases as time goes by, with those betting for lower levels decreasing from 60% to 46%. On average, the pair is seen holding above the 0.7600 threshold.

In the Overview chart, moving averages have limited bearish slopes, which decrease as time goes by. In the monthly perspective, most targets accumulate between 0.76 and 0.78, with scope to advance up to the critical 0.8000 level. Possible targets are more split in the quarterly view, although the lower band of the range was set at 0.7200.

EUR/USD stays on the way to reverse the pullback from a monthly high, picking up bids to 1.0685 during early Thursday morning in Asia. Second reading of Q1 2022 US GDP, Jobless Claims and housing data to decorate calendar amid multiple holidays in Europe.