The EUR/USD pair witnessed heavy selling on Thursday and broke below the key 1.2000 psychological mark amid sustained US dollar buying interest. Progress with coronavirus vaccinations, along with hopes for a massive US fiscal spending in 2021 has been fueling hopes for a strong US economic recovery. Expectations of a larger government borrowing to fund the stimulus pushed the yield on the benchmark 10-year bond closer to 10-month tops touched in January. This was seen as a key factor that benefitted the greenback, which, in turn, continued exerting downward pressure on the major.

Adding to this, the incoming positive economic data further lifted confidence that the US economy will outpace global peers and provided an additional boost to the greenback. Against the backdrop of upbeat ADP report on private-sector employment and ISM Services PMI, data released on Thursday showed Initial Weekly Jobless Claims unexpectedly dropped to 779k during the week that ended on January 30. Conversely, the shared currency was weighed down by growing market worries that the slow rollout of COVID-19 vaccines in Europe could hamper the economic recovery.

The pair settled near the lower end of its daily trading range and refreshed two-month lows during the Asian session on Friday. The pair now seems to have entered a bearish consolidation phase and was seen oscillating in a range, just above mid-1.1900s. Investors now seemed to have moved on the sidelines and look forward to the official non-farm payrolls (NFP) data from the US for a fresh directional impetus. Following an abrupt decline in the previous month, the US economy is expected to have added 50K new jobs in January and the unemployment rate is anticipated to hold steady at 6.7%.

From a technical perspective, this week's breakthrough the 1.2055 horizontal support and subsequent weakness below the 1.2000 mark might have shifted the near-term bias in favour of bearish traders. Some follow-through selling below a resistance breakpoint, now turned support, near the 1.1950-40 region, will reaffirm the negative outlook and turn the pair vulnerable. The downward trajectory might then drag the pair further below the 1.1900 mark, towards testing the next major support near the 1.1860-55 region.

On the flip side, any attempted recovery might now confront immediate resistance near the 1.2000 mark. A further positive move might now be seen as a selling opportunity and remain capped near the 1.2055 support-turned-resistance. That said, some follow-through buying might prompt some near-term short-covering rally and lift the pair beyond the 1.2100 mark, towards the 1.2135-40 supply zone. 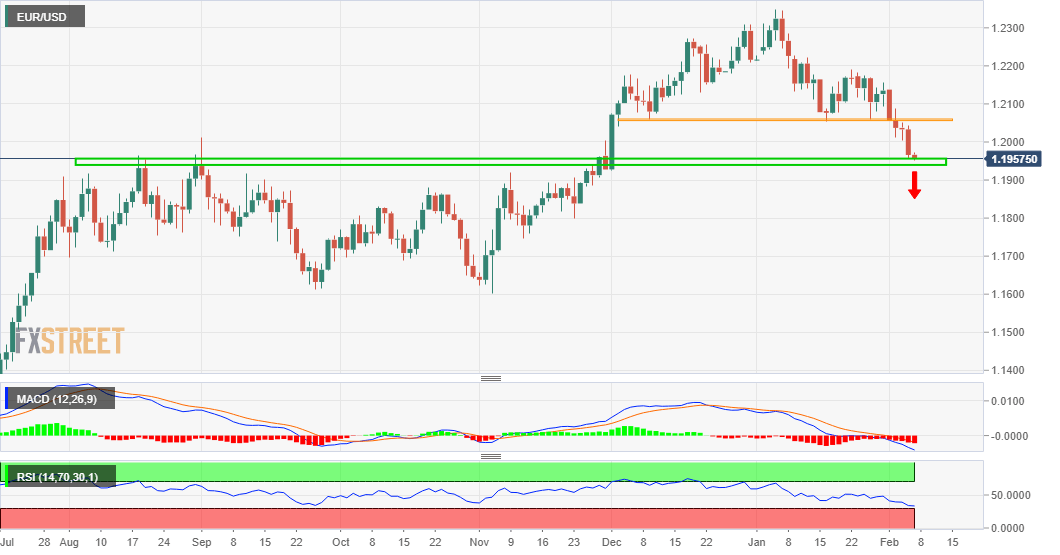