The Euro bounces to 1.11 zone in early European trading on Thursday, helped by better than expected German PMI data (Mfg Aug 43.6 vs 43.0 f/c; Services Aug 54.4 vs 54.1 f/c) that partially offsets negative impact from less hawkish than expected Fed minutes and political turmoil in Italy. Fresh strength attacks again key levels just above 1.11 barrier, which capped upside attempts in past four days, keeping bearish bias. Repeated close below 1.11 would keep the downside vulnerable, as current consolidation is forming bearish flag continuation pattern, completion of which (under 1.11 zone barriers) would open way for test of 1 Aug spike low at 1.1027 and psychological 1.10 support. Extended range trading can be expected as markets await key event of the week – the speech of Fed Chairman Jerome Powell in Jackson Hole symposium on Friday, expecting more information about Fed's next steps regarding US interest rates. Daily studies remain bearishly aligned as momentum is attempting to break into negative territory and 10/20DMA's formed bear-cross, although stochastic is heading north and reduces negative signals. Lift above 1.1100/13 zone would expose a cluster of key barriers at 1.1128/37 zone (10DMA/Fibo 38.2% of 1.1249/1.1066 / 20DMA), break of which provide relief and signal formation of higher base at 1.1066. 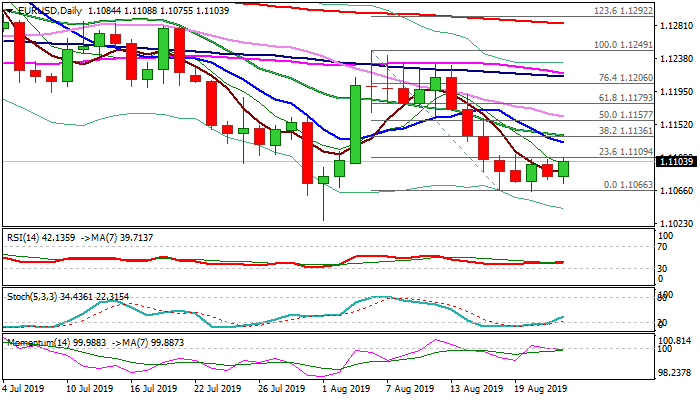