The US Dollar continued gaining traction against its European counterpart and kept exerting downward pressure on the EUR/USD pair for the third consecutive session on Wednesday. The recent escalation in the US-China trade tensions showed no signs of easing after China threatened to restrict exports of rare earth elements, which coupled with rising concerns over the global growth outlook forced investors to take shelter in traditional safe-haven currencies, including the greenback.

The global flight to safety was evident from the generalized decline in the global government bond yields. In fact, yields on the German 10-year bond extended its recent free fall and dropped to the lowest level since July 2016, which eventually had a rather negative effect on the shared currency. The common currency was further weighed down by concerns over a possible clash between the Euro-skeptic coalition government in Italy and the European Union.

The pair finally settled near the lower end of its daily trading range, albeit managed to hold its neck above two-year lows set last week. In absence of any major market moving economic releases from the Euro-zone, Thursday's key focus will be on the prelim (second estimate) US Q1 GDP print, expected to show that the economic growth stood at 3.1% as against 3.2% estimated initially. The data will provide fresh clues about the state of the world's top economy, which might influence the near-term sentiment surrounding the USD and provide some meaningful directional impetus.

Meanwhile, the technical set-up remains in favor of bearish traders and hence, a follow-through slide, towards challenging the 1.1100 round figure mark, remains a distinct possibility. Sustained weakness below the mentioned handle might turn the pair vulnerable to extend the recent bearish trajectory towards testing a five-month-old descending trend-channel support, currently in the vicinity of the key 1.1000 psychological mark.

On the flip side, immediate resistance is pegged near mid-1.1100s, above which a bout of short-covering might assist the pair to aim back towards reclaiming the 1.1200 handle. The latter coincides with 50-day SMA and should act as a key barrier, which if cleared might lift the pair beyond the 1.1235 intermediate resistance towards testing the descending channel resistance near the 1.1275-80 region. 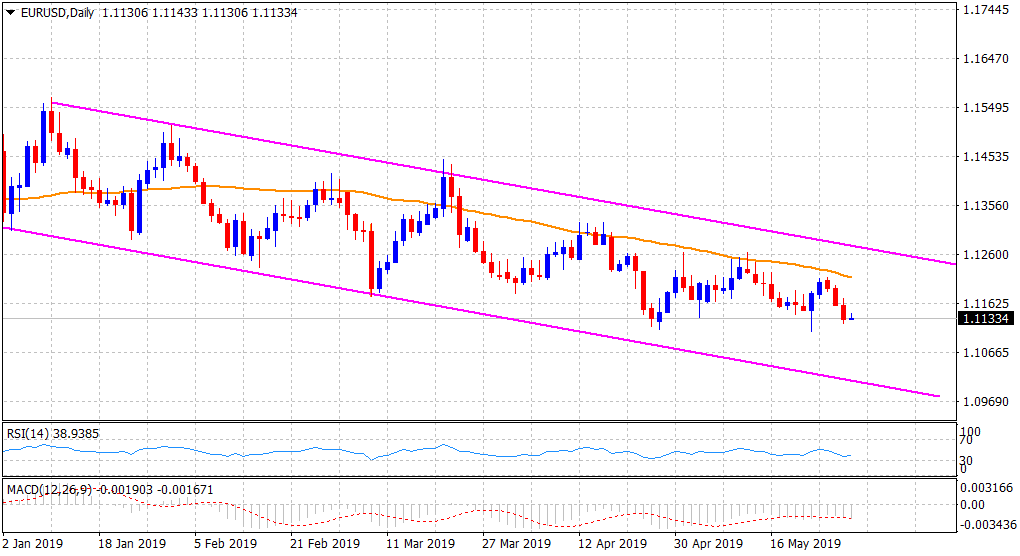 WTI tumbles more than 3%, remains under $40 at one-week lows

Crude oil and equity prices tumbled during the American session, ending a period or relatively limited moves across financial markets. WTI fell from $40.80 a barrel to $39.25, reaching the lowest level in a week. Earlier, it approached $41.00.