Two things dominated the financial world this 2018: political turmoil and fears of slowing economic growth. The first was quite foreseeable with Brexit and Trump´s victory in the US but the second dawned on markets like a cold shower in the second half of the year. It was not far ago when EU's growth hit record highs, according to Markit, with business activity shrinking to its lowest pace of growth in over four years in December. It was back in March, when the Fed pulled the trigger for the first time, that markets players were rushing into the greenback pricing in a long-lasting cycle of rate hikes amid solid economic developments in the US. Even the ECB was confident enough to announce the end of QE. But when and why things took such turn to the worst?

Well, let's start by considering that trade tensions between the US and the rest of the world were among the top leading political jitters. US protectionist policy to "make America great again," particularly focused on its trade deficit with China, has spurred fears throughout the year. The US trade deficit with China was roughly $347 billion in 2017, and despite sanctions, tariffs, and all the circus, such deficit was matched in the first 10 months of this 2018. There are two reasons behind this: a stronger dollar and China having an exchange rate that is partially fixed to the dollar.

Also, and probably the most relevant issue, the US has neglected growth, putting the focus on its foreign relationships rather than on inner developments. Indeed, US macroeconomic figures were quite encouraging, but behind impressive headlines, there were a couple of scary numbers. Just as an example, China has recently announced it will resume buying soybean to the US, a sign of goodwill from the Asian giant. Still, in 2018, soybean exports to China decreased by 98%, according to a Deutsche Bank research. Total exports were down 1.0% in the 10 months to October, after a 12.8% increase in 2017. In January, right after turning somewhere else, China imported $1.2 billion in soybean from the US. The USDA is forecasting that soybean-planted acreage will drop by 6.6 million acres in 2019. China has not only got alternative trade partners but also cut costs for business and consumer to cushion the impact of US tariffs, with tax reforms. The war is far from over, and the US doesn't seem to be winning the battle.

Then, is the Federal Reserve. The "back to normal" policy came by the hand of 4 rate hikes spread through the year, and the withdrawal of $374.6 billion of its high-powered money at a monthly rate of $34.1 billion.

US President Trump opened yet another battle front during the second half of the year that rocked the boat. He decided to interfere with what no other US President did: the Federal Reserve monetary policy. Trump said he was not "happy" with Fed's Chief Powell and his tightening policy, pledging for no more rate hikes and a weaker dollar. It was sort of a vicious circle, with the dollar rising amid the US Federal Reserve lifting rates, and a stronger local currency generating wider trade deficits and slower growth.

Chief Powell went from "a long way ahead" toward neutral rate levels to "just below" the level from October to November. Central bankers think of neutral rates as a level in where they don't affect real GDP, neither inflation, a level of rates that is neither contractionary nor expansionary. In its latest monetary policy statement, Powell said that the Fed funds rates are "now at the lower end of neutral." Further rate hikes are data dependent, Powell added, but central banks have come to a point where monetary and fiscal stimulus are no longer enough to spur growth. That said, central banks' influence on currencies will likely remain subdued.

Recession coming to the US?

In the meantime, the US yield curve flattened. The 10-year Treasury note fell to 2.75% post-Fed, hitting its lowest in 7 months, while the 2-year note yield remained around 2.67%. Less than 10 basis points' difference, something that last happened in June 2007. An inverted yield curve is usually seen as a sign of recession, and while is not yet time to panic, indeed are worrisome days

Across the Atlantic, things are no better. Despite fulfilling his promise of putting an end to QE, ECB's head, Mario Draghi, acknowledged that risks to the economy are moving to the downside. In its December meeting, the central bank downgraded its growth and inflation forecasts, and while still showing confidence on future developments, the central bank is now set to remain on hold at least until the final quarter of 2019. Uncertainty, not only coming from US protectionism but also by local turmoil, with France falling into recession, fears of an Italian credit crunch, and the UK departure around the corner without a clear deal.

For sure, the developments that dominated the FX board during this year will keep on leading the way in the first quarter of 2019. There are two key events that will take place in these first three months that could seal the fate of the pair: the end of the 90-day truce between China and the US and Brexit, and none of them are seen coming to good port. Trade tensions have yet to take their toll on the greenback, while Brexit will hit harder the UK but won't be good for the EU either. And as said, with monetary and fiscal stimulus no longer being enough to solve things, financial turmoil is set to escalate.

Following a strong rally in January that extended into the first week of February taking the pair up to 1.2554, it entered a selling spiral that found a bottom in November at 1.1215. Now trading roughly 200 pips' above this last, the pair has managed to close only one month with some relevant gains in its way down. December seems poised also to end positively, but with the pair at current levels, a relevant recovery is still out of the picture. The 23.6% retracement of the yearly decline comes at 1.1530, while the 38.2% retracement of the same slump is located at 1.1725, which means that the pair would need to escalate 300 pips and reach levels not seen since last August to have chances of a more sustainable recovery. The 61.8% retracement of the same rally comes at 1.2040.

The weekly chart shows that the pair has been consolidating for eight consecutive weeks, with the highest level reached after the mentioned yearly low is 1.1472, with multiple weekly highs in the 1.1450/70 region a critical resistance between 2015 and 2017. Long-term charts, like the monthly and weekly ones, show that technical indicators remain within negative levels, without clear directional strength reflecting the lack of directional strength seen these last two months, and falling short of suggesting a possible comeback of the common currency. The downside, on the other hand, seems well limited by the mentioned low that if broken, could result in a downward extension toward the 1.1000 figure. Below this last 1.0600 is the next possible bearish target, in the strange case the greenback recovers its crown. As it happened a couple of years ago, it won't be the strongest that will stand victorious but the "less weak.

Count 1 -and its a lower projection at 0.9700- has its origin in the 2014 reversal which was the forth lower high since the decline began from the all time high in 2007. Count 2, established at the beginning of 2017, reached its objective at 1.2400 during the same year. During the ascent move, another impressive column of Xs was built, from which count 3 emerges. Unless the EURUSD breaks below 1.0400, the upward projection at 1.4900 remains valid. Unfortunately for the bulls, the 1000 pip fall from the 1.2400 target established another downward price objective at 0.9200. Only a break above 1.2500 would invalidate this measurement.

EURUSD can be unfolding a bigger EW ending diagonal, where we are observing a five wave decline within red wave C). In 2018, pair turned nicely away from the upper red line of an ending diagonal, so wave IV appears to be in place and a new bearish leg can be already underway to 1.0000/0.9900 for the final wave V of C). That said, EURUSD could remain in a bearish shape, but in the mean-time we may just see a temporary corrective recovery in the 1st quarter of 2019 towards 1.1800 before a continuation lower in the second part of 2019 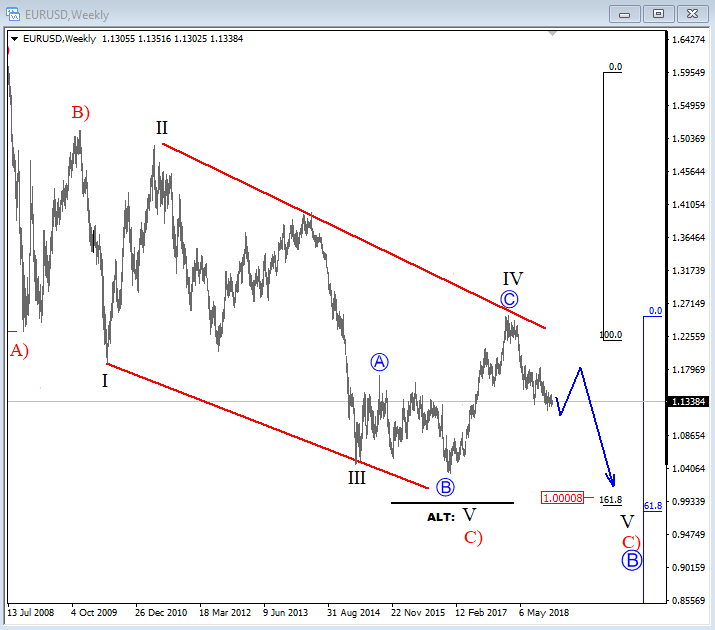 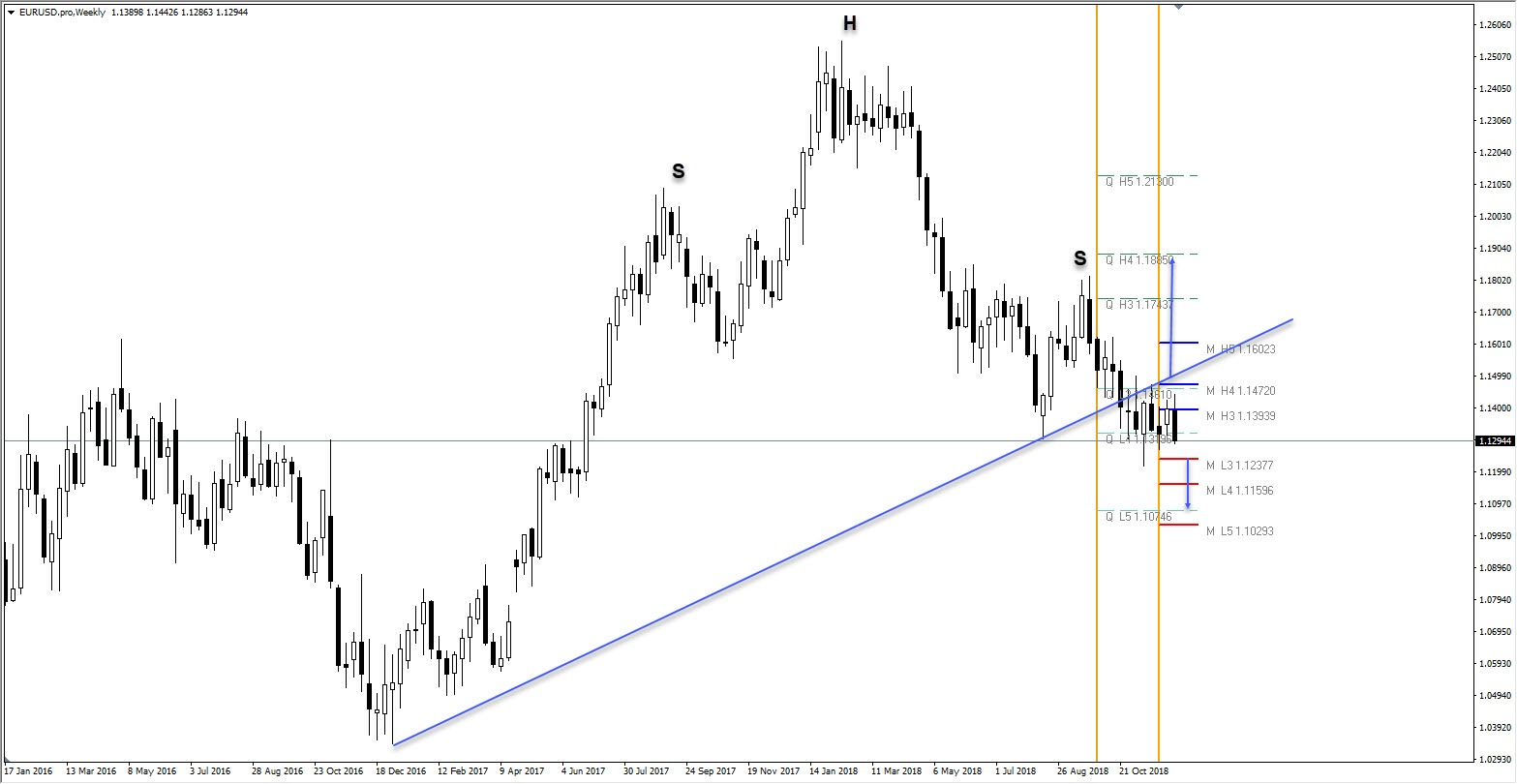