When Christine Lagarde started as president of the ECB in November last year, one of her goals was to improve the central bank's communication, particularly with the general public. But after almost a year in office, Lagarde's communication on monetary policy seems to fall behind her predecessor but other ECB members seem to be filling the gap.

In the world of central bankers, there are many ways to communicate with both the general public and financial markets. There are traditional channels like press conferences, speeches, hearings at the European Parliament and also media interviews, and there are increasingly other channels like social media.

In our tongue-in-cheek analysis, we selected Christine Lagarde's speeches given in the first twelve months in office and compared them to her predecessor, Mario Draghi's speeches as well as with speeches by ECB's chief economist Philip Lane and Isabel Schnabel, an ECB executive board member.

Looking at the sheer number of speeches during the first twelve months in office, it would seem that Mario Draghi was more active than president Christine Lagarde, as he gave nine speeches while Lagarde – perhaps due to Covid-19 – only gave seven speeches.

The content of the speeches shows that Mario Draghi's favourite topic was clearly price stability - a term which appeared more than four times on average in every single speech. In contrast, in Lagarde's first six speeches, her favourite word seems to be monetary policy, but it appears to be a very weak favourite as it came up only twice on average in every speech. The term ‘price stability' only showed up 0.3 times on average. 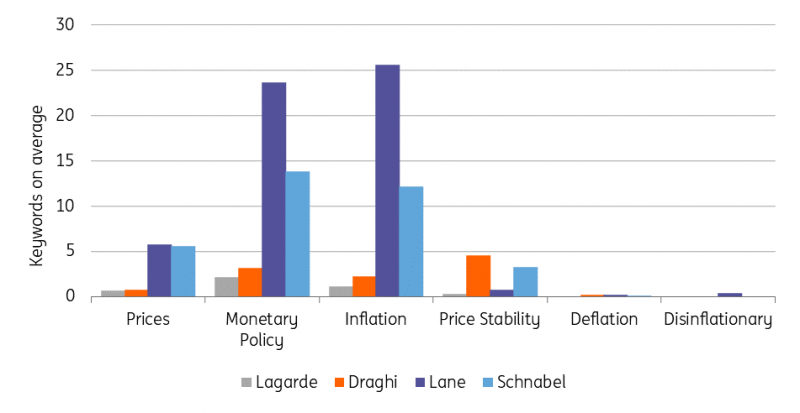 To give Christine Lagarde some credit, her speech at the ‘ECB and its watchers' conference in September made up for the underrepresentation of monetary policy terms in the first few speeches and was almost a firework of good old central bankers' talk. It was a speech on the ECB's strategy review, mentioning 'inflation' 82 times - more than Draghi had done in an entire year.

When Christine Lagarde came into office last year, there was also the expectation that she could spread the burden of talking about monetary policy over several shoulders. Therefore, it is worth taking a look at what other members of the Executive Board have done over the last twelve months. The most designated member to talk about monetary policy after Lagarde is Philip Lane.

He has not only become the secret spokesperson on monetary policy since the introduction of a blog entry the day after the ECB press conference but he has also given seven speeches since November. On average, Lane talked about monetary policy and inflation more than 20 times per speech.

The real stage hog of the ECB, however, is Isabel Schnabel, who only joined the Executive Board in January 2020 but who has already given ten speeches. Her speeches with regards to monetary policy, follow similar patterns to Lane. On average, Schnabel talked about monetary policy more than 13 times per speech and 12 times on inflation. 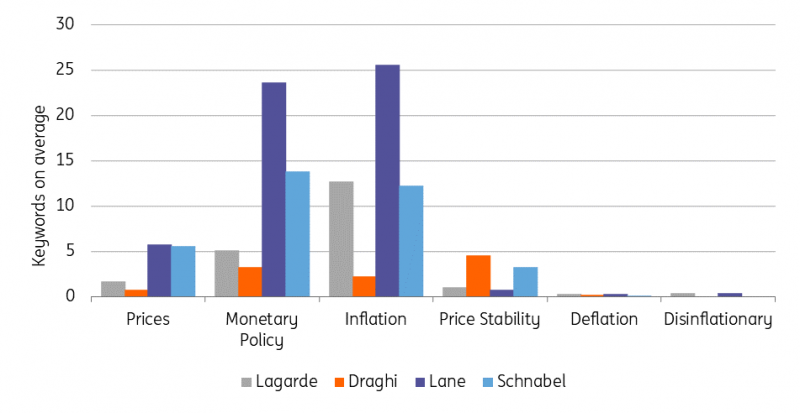