The US Dollar spent the first three quarters of this year in darkness as investors switched to European and Asian markets on account of the political mess in Washington and due to the increased odds of a slower Fed tightening.

However, the tables may have turned as we head into the fourth quarter, which historically has been a better period for the greenback. 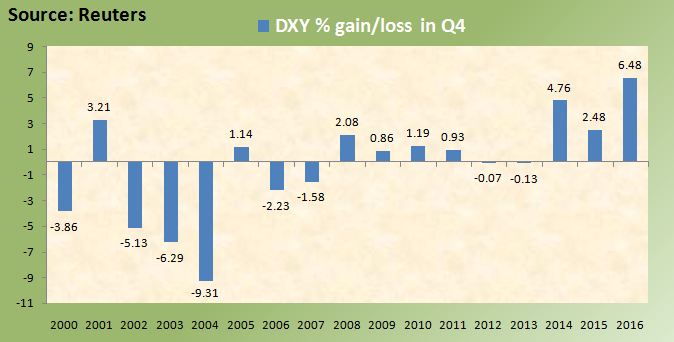 The chart above shows-

Fed is less data dependent, more focused on unwinding ultra-easy monetary policy - Yellen said yesterday that the Fed should be wary of moving too gradually. She felt that persistently easy policy can hurt financial stability and she sees risks of the economy overheating without modest hikes over time.

So far the gradual approach has been appropriate due to the subdued pace of inflation, but low prices likely reflect factors that should fade. Meanwhile, she added that it is “imprudent” to keep policy on hold until inflation hits the 2% target.

Yellen's comment on inflation indicates the Fed is less data dependent and more focused on unwinding the ultra-easy monetary policy. Back in June, the Bank for International Settlements [BIS] had asked central banks to press ahead with interest rate increases and to unwind the ultra-easy policy that has failed to boost inflation.

“If we leave it too late, it is going to be much more difficult to accomplish that unwinding. Even if there are some short-term bumps in the road it would be much more advisable to stay the course and begin that process of normalization”, the BIS said in June. Yellen & Co. seem to have taken the BIS' advice seriously.

During her press conference last week, Yellen also said that balance sheet unwinding will continue even if the economy faces short-term bumps and that the central bank will exhaust interest rate [cuts] first before moving onto QE/balance sheet expansion. So, the Fed would want to hike rates at a faster pace: the higher the rates are from zero levels, more will be the room to unwind the balance sheet.

Markets are yet to price-in the heightened odds of a faster-than-expected Fed tightening. Slowly but surely, investors are realizing that the Trump Bump, though desirable, is not necessary, i.e. the US economy is chugging along pretty well.

Furthermore, Chinese PPI is again showing signs of life. Back-to-back better-than-expected Chinese monthly PPI readings could revive the reflation trade and boost the US inflation expectations and the US dollar.

To cut the long story short, the stage looks set for the USD rally in the fourth quarter as seasonality study gels well with the bullish macro factors.