Trump gives it, market takes it away. Less than 24 hours after markets rallied 1.5% on Trump's announcement to delayed US tariffs on a portion of the items due to be hit on Sept 1st, markets tumbled (624 pts or -2.2% for the Dow) after the most popular measure of the US yield curve (10y-2y) entered negative territory for the 1st time since May 2007. The other reason (if these matter to you) is related to China's reaction. More detail on how this YC measure differs from other measures and its implications.

Trump explained the reason to delay tariffs on many consumer products until Dec 15 was to avoid dampening on Christmas shopping. He also hinted that he was expecting agricultural purchases in exchange.

Chinese reports gave less on an indication of a thaw. They highlighted that it was the US who made the call and press reports took a victory lap on the US climbdown. Those aren't the actions of a country who is looking to compromise.

A Few Pointers on the Yield Curve

Here is a series of tweets Ashraf made on the topic. Bear in mind it took about 6-12 months on average for the US economy to dip into recession after the start of YC inversions. 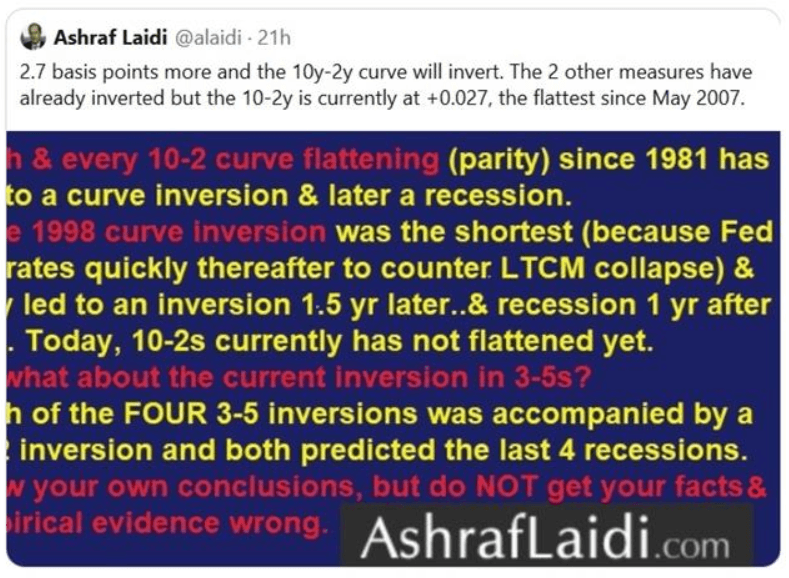 Chronicles of a Fed Error

Contributing to the sell-off in indices were remarks from St Louis Fed's Bullard saying in a podcast that economic outcomes were "quite good" for the US as far as their frameworks were concerned. And so as long as the Fed find no reason to cut rates further and markets are distracted by daily stock market fluctuations & Trump's tweets, the macro picture will go on deteriorating (impacted supply chains, slashed imports, job cuts) until it's too late.

Adding to the angst in bonds was the July US CPI report. Prices rose 1.8% y/y compared to 1.7% expected but that modest number disguises a near-term jump in core inflation. Ex food and energy, prices rose 0.3% m/m; combined with the same rise in June, that's the fastest two-month rise in the core since 2006. The flipside was the wage growth was dismal.