USD credit spreads are clearly outperforming EUR credit despite the fact that the (relative) volume of purchases by the ECB through PEPP and CSPP is far more significant. So why does the Fed seems to be pressing the right buttons?

Sometimes carrying the ammunition is more effective than the bullet itself, as the Fed has a huge arsenal which is predominately left in the warehouse, whilst the ECB has been extremely active in credit markets but the effect has been dissimilar.

We find that USD credit spreads have outperformed over the past few months despite a more concerning Covid-19 trend.

We estimate that three factors are driving this outperformance.

Firstly, the novelty of the Fed's involvement in credit markets (CSPP - and APP as a whole - has not really stopped since early 2016).

Secondly, we believe the presence of the Fed in the ETF space is a key difference between the two markets.

Lastly, the ECB has not added fallen angels to its programmes whilst the Fed has indicated it is part of their ammunition.

Yield is also a crucial driver in this development, as we note that the chase for yield in the USD market is something of a novelty and reminds us of the same in EUR when rates first targeted near zero levels a few years ago; this element of the demand for yield drives credit spreads tighter in USD.

On the other hand, the supply equation works in favour of the EUR market with both gross and net supply not hitting the same excesses as USD markets in 2020.

When we look at AUM for mutual funds developments we see that the ETF route really influences the outperformance as inflows into USD HY are now in positive territory whilst EUR HY has only just turned to inflows YTD. The confidence the Fed has given default sensitive investors by targeting IG and HY ETFs is the backbone to this development.

We do believe that given the possibility of a second wave of Covid-19 related lockdowns and that given recent performance and massive supply YTD that USD debt is more sensitive now to re-pricing, particularly as supply starts to rear its sizeable head after the summer recess. 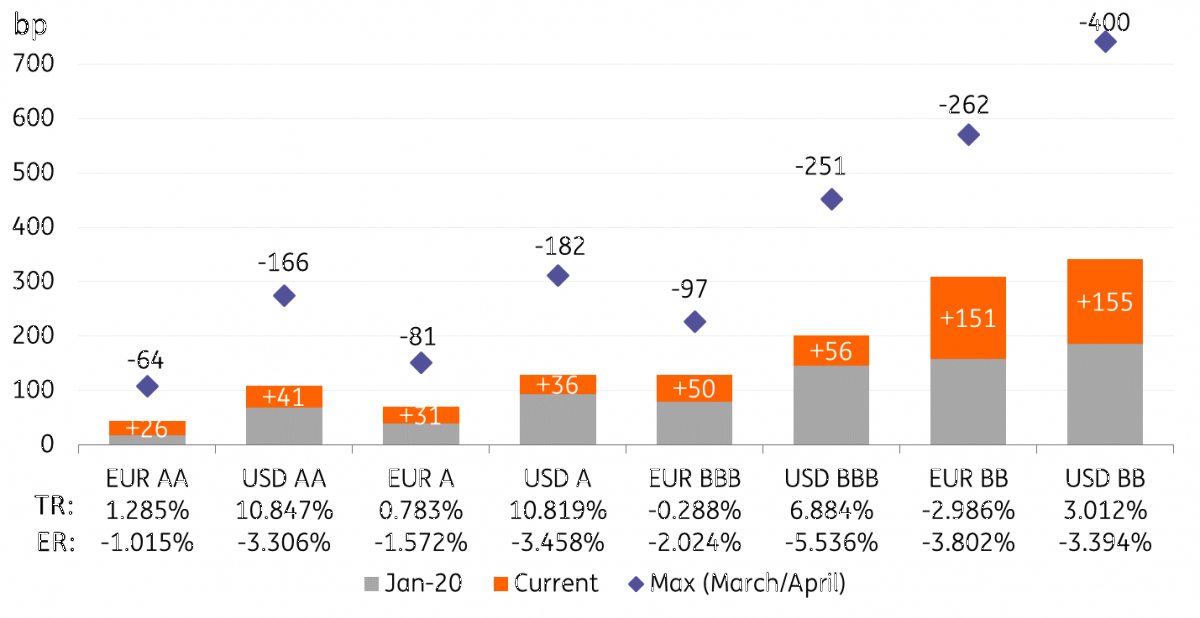 The ECB has been particularly active in corporate purchasing during the crisis. Initially introducing an additional €120bn envelope into APP, of which a portion has been utilised under the Corporate Sector Purchasing Programme (CSPP) and then introducing the Pandemic Emergency Purchasing Programme (PEPP) of €750bn, which further was expanded by an additional €600bn. PEPP includes corporate purchases which run at roughly 5%, accounting for around €5bn per month, matching that of the average CSPP net purchases per month.

In addition to corporate purchases, the ECB is very supportive of Banks via the TLTRO programme and the purchases of covered bonds under CBPP3. The purchase of public sector debt is a favourite of the ECB in terms of volumes under PSPP and PEPP. Finally, the ECB supports asset-backed securities (under ABSPP) and commercial paper (under PEPP).

Similar to the ECB, the Fed has also introduced effective supportive programmes, namely its corporate credit facility in which the two components are primary market and secondary market purchasing. However, both programmes are limited to the short end of the curve, 4yr and 5yr maturities and less, respectively. Additionally, the Fed purchases under a commercial paper facility and a municipal facility.

Both the ECB and the Fed include only domestic debt for their purchasing eligibility. A significant difference in terms of corporate purchasing between the two central banks is the approach to primary market purchasing. The ECB has been considerably active in ‘hoovering up’ nearly every eligible new issue. Since the recommencement of CSPP in November and the introduction of PEPP, primary market purchases have accounted for roughly 65% of the new bonds added. The Fed’s primary market corporate credit facility, on the other hand, acts more so as a lender of last resort. Whereby, the Fed will purchase qualifying bonds directly off the issuer as a sole investor or a portion (up to 25%) of the bond at issuance. The bond must have a maturity of 4 years or less and there will be an additional ‘Commitment Fee’ of 100bp.

Within the support for corporates, the Fed is limited to the short end but the ECB can purchase across the curve, in theory offering more support and keeping curves relatively flat. Indeed the USD curves are somewhat steeper but this is subdued by the hope of further Fed stimulus, although the ETF purchases are a principal component of the Fed’s programme. According to figures as of the end of 16 June, ETF purchases under the secondary market corporate credit facility amounted to $5.3bn (market value of $6.8bn). This is conservative relative to the roughly $900bn eligible ETF universe. Of the ETF purchases, around 17% were high yield. This is a very significant difference between the ECB and the Fed, the ECB offers no direct support to the high yield market.

Furthermore, the Fed includes 'fallen angels' in its purchasing of bonds, those which have see a drop in their investment-grade rating, whereas the ECB has only included those fallen angels in their collateral eligibility. As a result, we see Euro high yield more exposed to volatility. 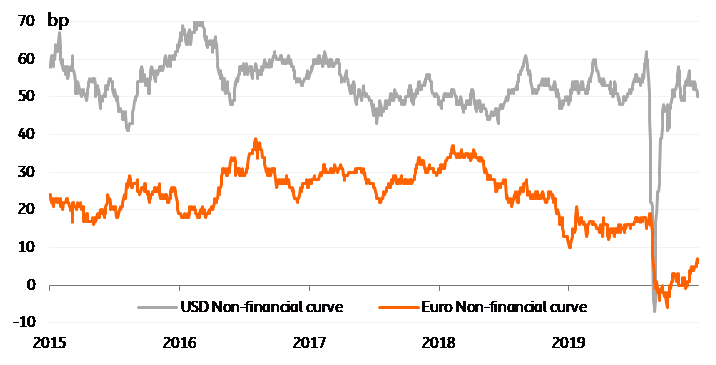 Overall the Fed seems to have hit the nail on the head with their broader approach compared with the more targeted ECB, as the large variance in Fed support has indeed pulled USD spreads tighter and are clearly outperforming EUR spreads, particularly on the short end of the curve. This is clearly identified by the larger total return YTD. As well as seen in the shape of the curve, as the USD curve quickly bounced back to the steep levels of pre-Covid-19, whereas the EUR curve remains relatively flat.

USD EUR spread differentials play a substantial factor, amongst others, in the level debt issued by US corporates in Euro (reverse Yankee) and debt issued by European corporates in USD (Yankee). Now that USD spreads are outperforming EUR spreads and the differential is relatively tight, there is less of a cost advantage for reverse Yankee supply. Of course, the opposite can be said for Yankee supply, particularly if the cross-currency basis swap remains somewhat wide.

As mentioned, due to the short end limitations self-imposed on the Fed purchasing, the short end is outperforming in USD spreads, as well as the USD curve being significantly steeper than the EUR curve. This has led to the majority of the USD over EUR outperformance to fall in the short end. As illustrated in Figure 8, the 3-5yr area of USD EUR differential is hitting historic lows. Although the 10yr area of the USD curve still remains relatively tight but not near the lows of 2018, meaning the reverse Yankee attraction in the long end remains limited. 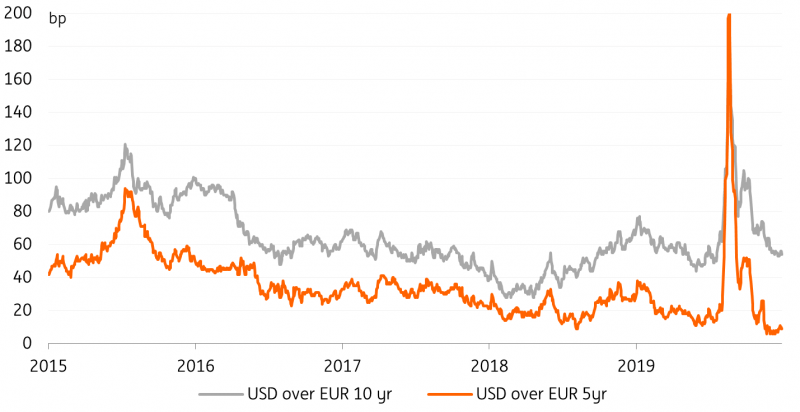 The outlook for the rest of the year

Across the curve, these tight levels do suggest there should be significantly less reverse Yankee supply, but YTD this year we pencil in €50bn in reverse Yankee supply, compared to the €56bn supplied in 2019 YTD, which went on to become a record-breaking year. However, taking into account the sheer size of supply in USD thus far this year ($812bn), reverse Yankee only accounts for 6% of US corporate funding. A very different story to the 15% seen last year on a YTD basis. Therefore we do expect reverse Yankee debt to continue to be supplied over the second half of 2020 and reach up to a full-year estimate of €80bn, down from last year’s FY figure of €99bn. Of course, this will likely be concentrated over the longer end of the curve.

Another potential outcome is an uptick in yankee supply on the short end. There will be a particular cost advantage to do so if the cross currency basis swap falls further negative. Although in any case, a major factor against swapping is the lack of QE eligibility, as ECB only buy European corporate debt and the Fed only buy US corporate debt.

If there is an uptick in either reverse Yankee or Yankee supply, there will be a supporting factor for spreads of the home currency. As such, if European corporates issue in USD, there will be less supply in EUR which will alleviate any supply pressure on spreads. Additionally, with less eligible debt being issued, the current eligible debt will become more supported under QE resulting in further outperformance of eligible spreads.

In conclusion, it seems the Fed’s loaded gun is more powerful than the ECB’s fired bullet. The USD spread performance, relative to EUR, illustrates the Fed’s substantial ‘arsenal’ and is certainly an effective method in supporting spreads. Despite the fact that the ECB has been considerably more active in purchasing, particularly when it comes to corporate purchases.

We estimate that three factors are driving this outperformance

We do believe that given the possibility of a second wave of Covid-19 related lockdowns that USD debt is more sensitive now to a re-pricing, particularly due to the record-breaking supply.