Luqin Wang and Yong Liu, researchers at the NYU Polytechnic School of Engineering, have come up with a paper on the evolution of Bitcoin mining. Their work tackles various aspects of how Bitcoin miners have changed over the life of the network. In a subsection on solo miners, we can read:

We now examine how fast miners transfer out mined Bitcoins. We measure the time lag between a miner claimed a block and her next transaction. If a miner has no subsequent transaction in our trace, we tag the minor as frozen. For active miners, we calculate the average and distribution of their transfer lags. (…) a large fraction of early miners were frozen and never touched their mined Bitcoins, even after the Bitcoin price surge in 2013. Our conjecture is that those early miners were casual early adopters of Bitcoin as a fun technology, and they were not motivated by the potential financial value of Bitcoin. When Bitcoin became valuable, they might have, unfortunately, lost their account IDs, so that couldn't cash out. This suggests that lots of Bitcoins mined in the first two years might have been lost permanently! Things changed completely in 2011, not surprisingly, this is in sync with the value increase of Bitcoin. Not only almost all miners are active, the lag for transfer gets shorter and shorter. The slight increase in frozen ratio from 2012 to 2013 is due to the artifact that our trace ends in March 2014. (…) [The transfer lag distribution] further illustrates the decrease trend of transfer lags as time evolves. This suggests that later miners were explicitly driven by profits and diligently transferred out mined Bitcoins.

It turns out that in 2013 (most recent year for which the above analysis was conducted), only about 0.96% of miners were actually “frozen.” In keeping with this result, the period between mining and cashing out of Bitcoin fell from around 138 days in 2009 to around 1.5 days in 2013. This would mean that the speed at which miners are getting rid of their bitcoins is increasingly high. This doesn’t mention the transfer lag for 2014 which might actually be even shorter than the mentioned 1.5 days.

These findings seem to confirm one of the major characteristics of the current state of the Bitcoin network, namely that Bitcoin miners don’t hold their rewards but rather seek to convert them to other currencies as soon as possible. The implication here might be that this exerts downward pressure on the price of Bitcoin as there is always a significant pool of miners willing to sell bitcoins at any price at which they are still operating. It would be very interesting to see other studies on how strong this downward pressure might actually be.

For now, we focus on the charts. 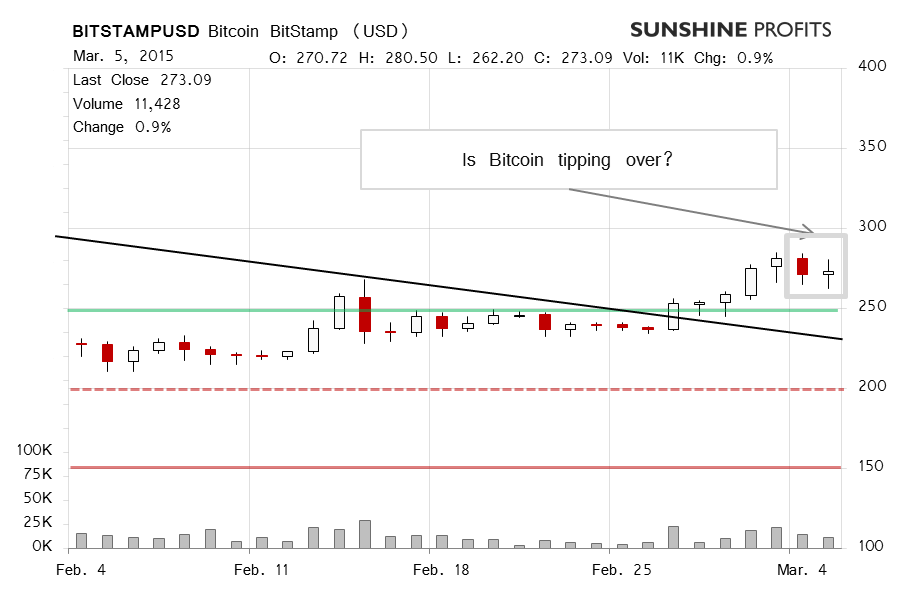 Yesterday, Bitcoin ended the day roughly where it had started it on BitStamp. The volume was not weak but not far lower than we used to see during major swings or reversals. We saw some action intraday, and the developments yesterday are somewhat indicative of more action to come based on the fact that Bitcoin went up and down without any decisive move at the end of the day.

Today (this is written around 10:00 a.m. ET) we’ve seen less action in terms of price and Bitcoin has stayed at the level of yesterday’s close, slightly above $270, visibly above $250 (solid green line). The move now might look like a consolidation above $250 but the main consideration here is whether Bitcoin actually remains above $250. The next day of a more significant price change might just as well set the tone for the coming weeks. 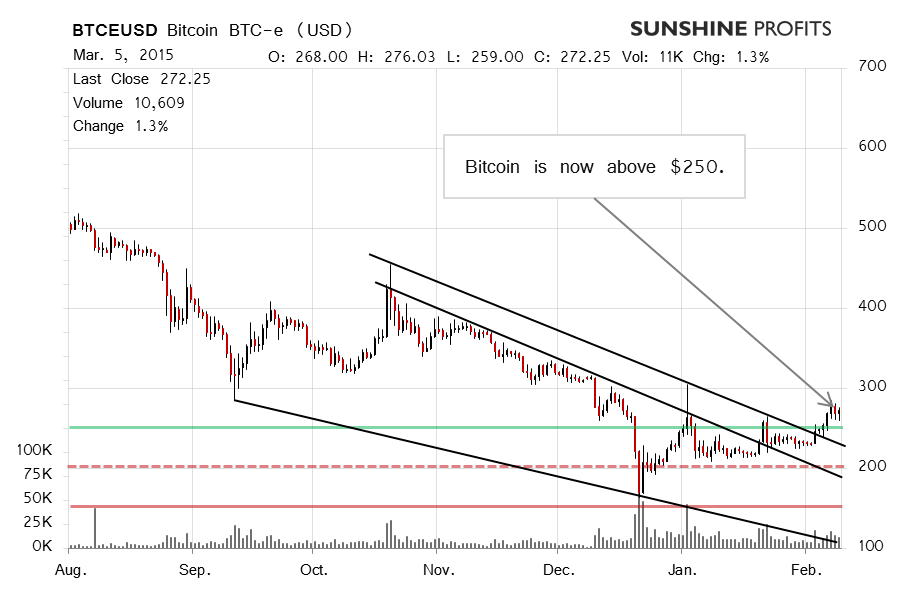 On the long-term BTC-e chart, we still see Bitcoin above $250 and possibly reverting to $250 (green line). Yesterday, we wrote:

We have seen some potential confirmation today but the move to the downside has not been strong enough to be suggestive of a significant slump. Particularly, the volume hasn’t really been strong. In such an environment, our best bet is still a pause or a decline. If we see a move below $250 (green line in the chart), this could be an indication of more depreciation to follow.

Bitcoin has held up above $250 for some time now. The main consideration here remains the next stronger move. If we see a move up, this might mean that further action to the upside would follow. On the contrary, Bitcoin is still overbought and we think that the current environment is tilted in favor of a bearish short-term outlook, but not enough to open hypothetical short positions just now.

Summing up, we don’t support any speculative positions just now.