A long and winding road of rate hikes? Not for Bank of England Andrew Bailey, who has already acknowledged that it is a "narrow path" cooling inflation without causing a recession.

Given this tone – reflected in other public appearances – I expect the BOE to refrain from aggressive moves after Thursday's expected 25 bps rate increase. Markets disagree, and that is where a sterling selling opportunity may appear.

Inflation has hit 7% YoY in Britain, a reason for the London-based institution to raise borrowing costs from 0.75% to 1%. That would cool the vibrant hot labor market, which is affected by a version of America's "Great Resignation"  phenomenon. 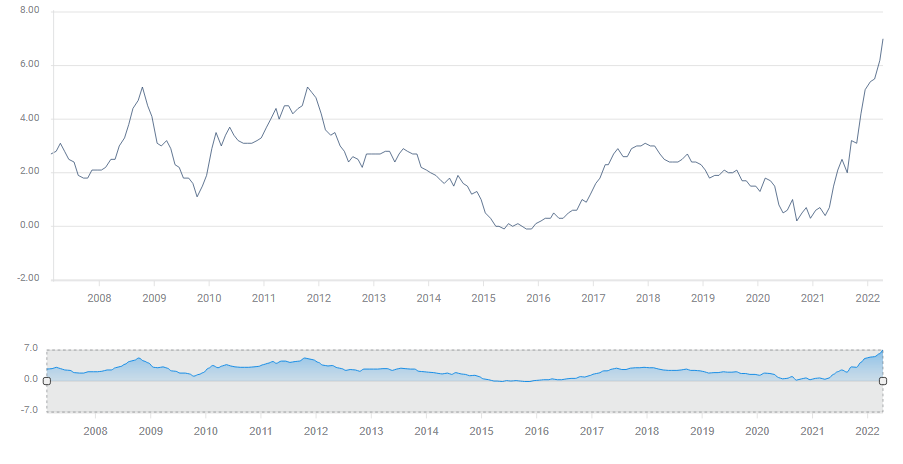 Nevertheless, spiraling costs are mostly out of the BOE's control. First, Russia's war in Ukraine is pushing energy costs higher for all of us. The recent Consumer Price Index (CPI) figures are for March, before a government-managed leap in prices coming in April.

The mere increase could depress demand for other goods, bringing inflation down. If I were the governor, I would at least want to see how this latest move affects the economy before pledging further hikes.

Uncertainty from consumer behavior joins other unknowns as the BOE prepares its Monetary Policy Report (MPR), which makes the upcoming rate decision a "Super Thursday" event. I will be closely watching the bank's inflation projections, a critical part of this publication.

Nobody can foretell how the war evolves, nor how supply-chain issues resulting from China's covid lockdown would impact the global economy and price developments. The BOE's inflation "fan chart" will likely be wide open, reflecting these uncertainties and conveying a message of "we do not know."

Markets expect not only a 25 bps hike now, but such a move in every meeting this year, a total of 150 bps. I cannot see any such commitment if the bank's own inflation forecasts are inconsistent with rising inflation, or are uncertain about employment. Without a pledge, the pound would plunge.

Even without digging into the report, the Monetary Policy Committee's voting pattern could immediately point to doubts about the need for higher borrowing costs. Back in March, BOE member Jon Cunliffe voted to leave rates unchanged. If he sticks to his guns – or even joined by another recession-wary member – sterling could sink instantly.

What would it take to send sterling higher? I think that it would take elevated inflation estimates and a unanimous vote to raise rates now to trigger an increase in the pound.

All in all, the deck is stacked against sterling.

The BOE is set fulfill expectations with a 25 bps rate hike on May 4, but fail to meet market pricing of further aggressive action later in the year. Apart from the uncertainties I have mentioned earlier, it is essential to note that local elections are held on the same day – and the results may impact government policy. That is another reason to refrain from big commitments.