The AUD/USD pair reached 0.7313, a fresh two-month high, but trimmed part of its weekly gains to settle in the 0.7240 price zone. The poor performance of Wall Street, particularly on Friday, undermined demand for the pair, although the broad dollar’s weakness kept it on the winning side.

The FX board was all about the greenback, as the US struggles with toxic levels of inflation and the US Federal Reserve seems unable to respond in a proper, timed manner to those. The American currency plummeted after the country confirmed the December Consumer Price index reached a four-decade high of 7% YoY. The core reading was higher-than-anticipating, reaching 5.5% vs the previous 4.9%.

Wall Street rallied on relief with the news as the figures fell short of twisting the Federal Reserve’s hand, which already announced tightening plans for 2022. However, stocks momentum began fading on Thursday and turned into a sell-off at the end of the week, giving the dollar a chance to recover some ground. It seems notable, though, that the greenback’s recovery has been limited. An explanation could be government bond yields, which remained subdued heading into the close.

US data added to the dollar’s decline, as the Producer Price Index hit 9.7% YoY in December, while the core reading jumped to 8.3%, reflecting persistent inflationary pressures. Also, Initial Jobless Claims in the week ended January 7 printed at 230K up by more than anticipated for a second consecutive week. An ascendant trend could also be appreciated in the 4-week average reading, which hit 210K in the same week.

More critical data in the docket

Australia released  December TD Securities inflation, which contracted from 3.1% to 2.8% YoY, while November Retail Sales jumped to 7.3% MoM, beating the 3.9% expected. More positive news came from the housing sector, as Home Loans in the same month were up a whopping 7.6%, while Building Permits rose 3.6%. On a down note, the Trade Balance surplus shrank to $A 9.4 billion.

However, encouraging Australian figures should be taken with a pinch of salt. The upbeat numbers are the result of the economic reopening, as the country finally gave up on fighting coronavirus with restriction. This booming has been seen in other economies early in 2021 but did not result as well as hinted.

The upcoming week will be a busy one in Asia, as on Monday, China will publish December Retail Sales and Industrial Production and Q4 Gross Domestic Product. Later into the week, Australia will unveil January Westpac Consumer Confidence, January Consumer Inflation Expectations, and December employment figures. The macroeconomic calendar will be lighter in the US as the country will publish the usual weekly unemployment data and some housing-related figures.

From a technical point of view, the AUD/USD pair maintains a neutral stance in the long term. The weekly chart shows that the pair briefly advanced above its 20 SMA but is back below it, struggling between directionless 100 and 200 SMAs. Technical indicators, in the meantime, lack directional strength around their midlines.

The daily chart shows that sellers defended the upside at around a flat 100 SMA, although the price remains above a mildly bullish 20 SMA, which currently converges with the 38.2% retracement of the 0.7555/0.6992 slump. Technical indicators have turned lower and are now approaching their midlines.

The pair may turn bullish on a break above 0.7340, the 61.8% retracement of the mentioned decline, looking then for a test of the 0.7420/0.7440 price zone. Above the latter, the pair could extend its gains towards the top of the range.

The risk will likely turn to the downside on a slide below 0.7205, the next Fibonacci support level, leaving room for a test of the 0.7070 level. 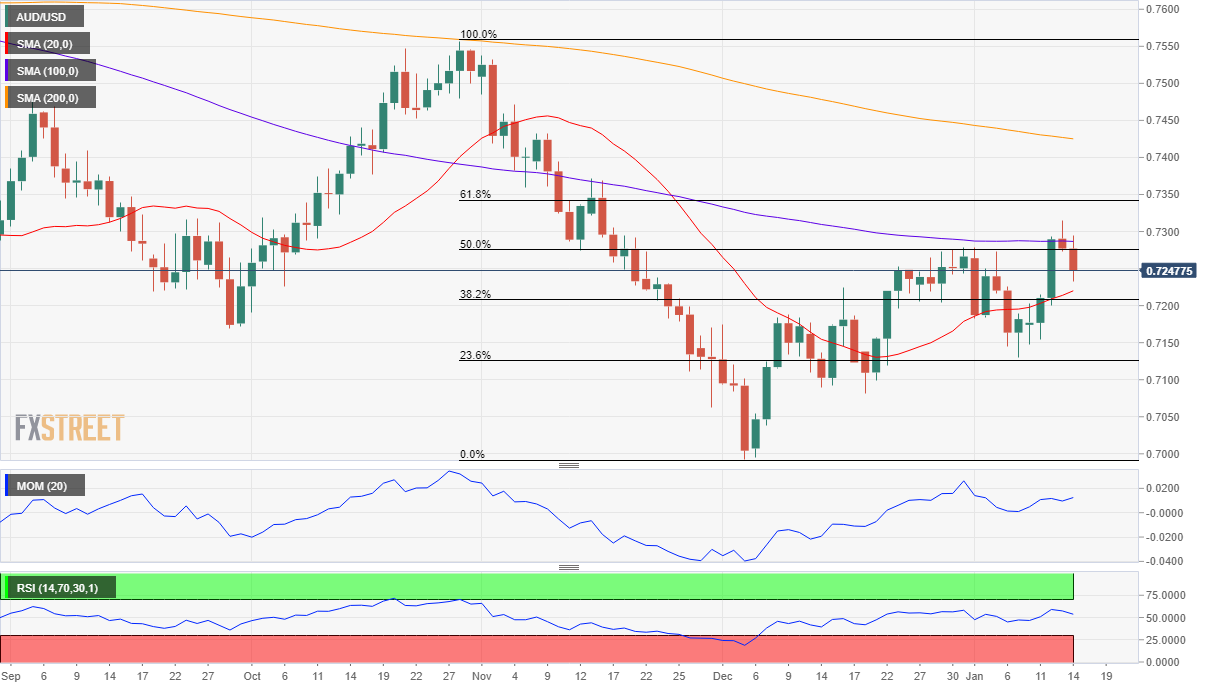 The FXStreet Forecast Poll favors a downward move in AUD/USD in the upcoming weeks. In the three time-frame under study, bears are the leading majority, with the pair seen returning to the 0.7200 price zone next week and falling afterwards, although not far below.

In the Overview chart, the spread of possible targets is relatively even in the different time-frame, reflecting the ongoing directional uncertainty. The moving averages are mildly bullish in the near term, but the longer one remains directionless, as most targets accumulate between 0.7100 and 0.7300.

EUR/USD Weekly Forecast: Bulls need to take out the 1.1500 level  to reaffirm their leadership

Gold Weekly Forecast: Bulls to take action with a break above $1,830