How low can the dollar go? The greenback tumbled in response to soothing words from the Federal Reserve and falling bond yields, an indirect result of warning words from other Fed officials. The focus now shifts to the UK, with economic indicators competing with the political drama.

This week in GBP/USD: The only way is up

Fed fails the dollar: Investors have been taking profits on greenback longs, taking advantage of every reason to do so. The week kicked off with soothing comments from Federal Reserve Chair Jerome Powell, who refrained from committing to raising rates in March, and conveyed a message of confidence.

The greenback then suffered when inflation "only" came out at 7% YoY – the highest since 1982, but exactly as expected. Investors seemed to price in even higher levels.

The focus shifted back to the central bank, as a slew of speakers seemed more hawkish than Powell. Fed Vice-Chair nominee Lael Brainard also backed hiking borrowing costs in March, and Fed Governor Christopher Waller even mentioned raising rates five hikes in 2022 – the first such comment.

While prospects of higher interest rates tend to support the underlying currency, the dollar reacted differently. Chances of steeper costs sent US stocks, especially tech ones, down. In turn, some of the funds fleeing from shares found their way into bonds, pushing 10-year yields from a peak of 1.808% to below 1.70%, thus making the dollar less attractive.

The bigger picture is the undoing of bets on Fed hikes, which are already priced in.

In the UK, politics was left, right and center. Prime Minister Boris Johnson finally admitted he participated in a party while the country was in lockdown instructed by his government. His half-hearted apology failed to impress, and some in his party have called on him to resign.

Johnson dodged ruling such an option out, saying he would not pre-empt an official inquiry. Uncertainty about the future of the PM and his successor has had limited influence on the pound so far.

More: UK PM Johnson is in dire straits, opening the door to political turmoil, Sunak would be pound-positive

The good news for Johnson and the UK comes from the COVID-19 front. After London saw a drop in cases, the entire UK is now showing a downtrend in infections, promising a decline in hospitalizations and deaths down the road. This development had a minor positive effect on the pound.

UK events: Top tier economic data and a focus on the man at the top

Will PM Johnson resign? Will his ruthless Conservative Party show him the door? Politicians seem to be waiting for Sue Gray, a senior civil servant, to complete her inquiry into the leader's breaking of the rules he imposed. However, Johnson's tumbling approval ratings – also related to high costs of living and other issues – and the drive of potential successors to enter 10 Downing Street could result in an early exit.

For the pound, the question is: who will become PM? Chancellor of the Exchequer Rishi Sunak enjoys support among the public and is seen by markets as a safe pair of hands. Investors are happy with his Thatcherite approach to the economy and see him as a moderate Brexiteer.

Foreign Secretary Liz Truss, a rising star within the Conservative Party, is a less-favored candidate due to her tough stance on Brexit. On the other hand, she previously led trade agreements in her previous post and is business-friendly. The worst-case scenario is fresh elections, which mean uncertainty – but Tory MPs are unlikely to rush to an event where they could lose their seats.

After a slow start, the economic calendar features several top-tier publications. The jobs report is set to show an ongoing increase in wages and low unemployment in November. The Claimant Count Change figure for December is also of interest and could indicate an increase in jobless claims after a long streak of encouraging falls.

The most significant release of the week is due on Wednesday, with the inflation report. The headline Consumer Price Index is set to edge up from November's 5.1% YoY figure but remain far from America's 7% level. The Bank of England already raised rates in December, and a more significant increase in inflation would cement another move in February. A surprising sub-5% figure would send sterling down.

Retail Sales figures for December are also of interest, especially after November's surprising leap. Did British shoppers bring forward Christmas shopping to November? Or did they storm the stores once again? Surprises are common in this report. 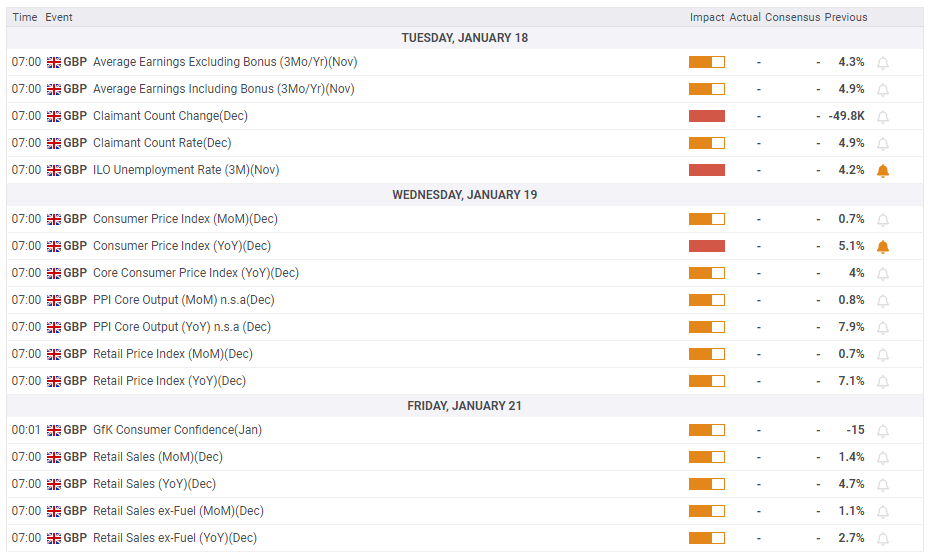 Contrary to the UK, US covid cases have yet to peak. Moreover, fewer Americans are vaccinated, and looser rules mean higher chances of illness and economic disruption. Hospitalizations have already hit a new peak of over 148,000 on average and could continue higher. An ongoing increase could weigh on sentiment. 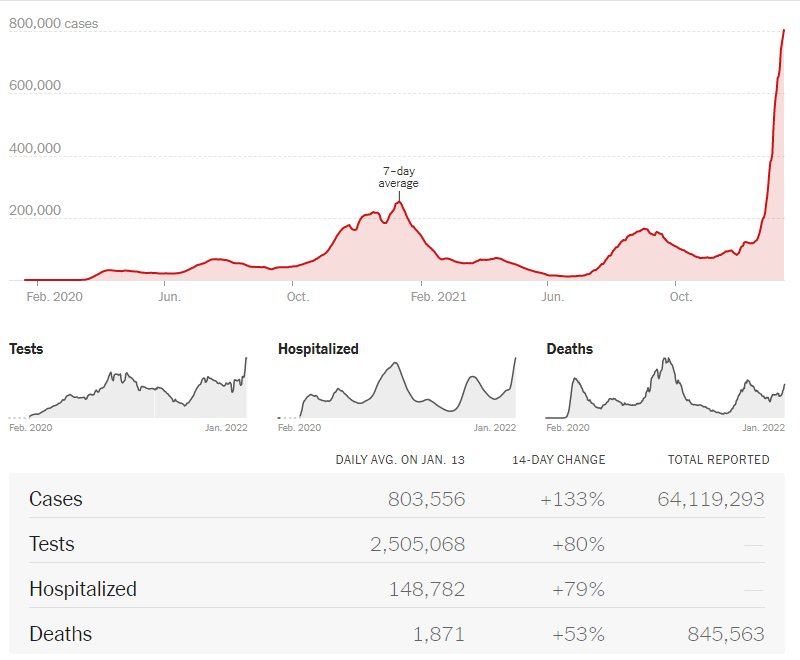 Speculation about the Federal Reserve's next moves will likely dominate the dollar's trading – even though there are no speeches scheduled for the upcoming week. The bank is in a "blackout period" ahead of its January 26 decision.

The economic calendar is relatively light after two busy weeks. Nevertheless, US housing figures are of interest on Wednesday. The sector has been booming amid the pandemic-triggered "race for space" – ‘space’ to work from home. Weekly jobless claims for the week ending January 13, when Nonfarm Payrolls surveys are conducted, may move markets more than previous weeks.

Pound/dollar is overbought – at least according to the Relative Strength Index (RSI) on the daily chart. The last time the RSI hit 72 was back in February 2021, resulting in a decline that ended only after 500 pips. Another sign of exhaustion is that GBP/USD failed to break above the 200-day Simple Moving Average (SMA). On the other hand, momentum remains strong and the pair is trading above the 50 and 100 SMAs.

Overall, the graph points to a significant downside correction.

Pound/dollar is overextended, and without a sticker shock from UK inflation, there is room for a considerable downside correction.

The FXStreet Forecast Poll is pointing to a bounce from the most recent retreat in the short-term, but more significant falls later down the road, basically reversing half of the recent uptrend. That is how experts see price action after marginally upgrading average targets. 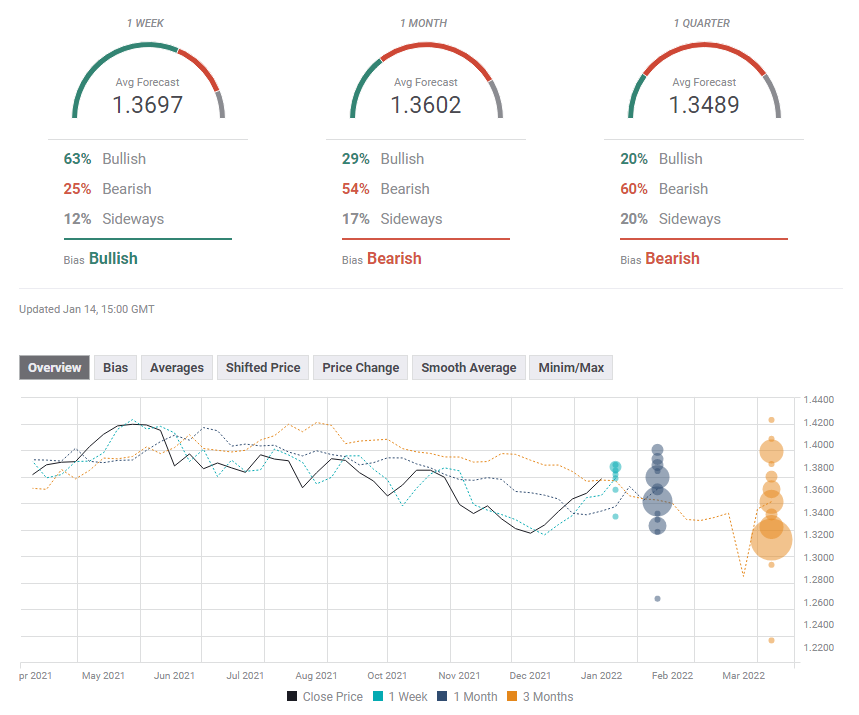