The EUR/USD pair finally woke up from its over-a-month lethargy, surging to 1.1482 and ending the week a handful of pips below the level. The American Dollar collapsed against all of its major rivals, and the catalyst was US inflation. The Consumer Price Index was confirmed at 7% YoY in December, its highest since 1982.

Price pressure has been the main theme through 2021, as the world began recovery from the initial pandemic blow. Supply chain disruptions and a change in consumption behaviour led to inflation reaching multi-decade highs across developed economies, which in turn, is pushing central bankers to tighten their monetary policies, despite the progress in the economic recovery being far from complete.

Up until last Wednesday, the release of inflation data tended to spur risk aversion, as fears the US Federal Reserve would retrieve financial support sent stocks lower and government bond yields higher, to the benefit of the greenback. However, this time was different. Equities advanced, while government bond yields pretty much ignored the reading, and the dollar collapsed.

Such a reaction could be explained by the figures being not enough to change the set course for the US Central Bank. By the end of 2021, US policymakers finally reckoned that price pressures were not just transitory and decided to tighten their monetary policy. In their latest meeting, the FOMC hinted at three rate hikes in 2022, while Powell and Co further suggested a balance sheet runoff for later in the year. Fed’s hawkishness was priced in ahead of the release.

The battle to recovery continues

The greenback’s slump was spiced up by poor US data released throughout the week. The Producer Price Index hit 9.7% YoY in December, while the core reading jumped to 8.3%, reflecting persistent inflationary pressures.  Also, Initial Jobless Claims in the week ended January 7 printed at 230K up by more than anticipated for a second consecutive week.  An ascendant trend could also be appreciated in the 4-week average reading, which hit 210K in the same week.

Across the pond, European policymakers maintain their wait-and-see stance. European Central Bank President Christine Lagarde said they understand that rising prices are a concern for many people and noted that they take this concern very seriously,  adding that "people can trust that our commitment to price stability is unwavering, which is critical for the firm anchoring of inflation expectations and for confidence in the currency."  ECB’s Vice President Luis de Guindos said the European economy is getting used to the coronavirus,  adding that “perhaps inflation won't be as transitory as forecast only some months ago," although he expects it to stay below the ECB's target in 2023 and 2024.

What’s up next on the data front

The EU had a scarce macroeconomic calendar, releasing little data of interest. Germany reported Real GDP Growth, which printed 2.7%, better than the previous -4.6%, while the November EU Trade Balance posted a deficit of €1.3 billion.

In the next week, it will be the turn of Germany and the EU to release the final readings of their December inflation figures, foreseen at 5.3% YoY and 5% YoY, respectively. In addition, the country will publish the January ZEW Survey, and the December Producer Price Index, while the Union will also offer the preliminary estimate of January Consumer Confidence.

The US will not publish relevant data, although the macroeconomic calendar includes the usual weekly unemployment data and some housing-related figures.

The EUR/USD pair trades around the 1.1440 level, holding on to most of its weekly gains. The pair has neared the 61.8% retracement of its 1.1691/1.1185 decline at around 1.1495 before giving up some ground, currently hovering around the 50% retracement of the aforementioned decline.

The weekly chart shows that the latest recovery from the 2021 low was a long-overdue correction, as the pair has been in a bearish movement pretty much since late in May when it topped at 1.2266. The same chart shows that the 20-SMA heads firmly lower and that it is crossing below the 200-SMA, both around the 1.1500 figure. Technical indicators, in the meantime, maintain their bullish slopes, although within negative levels, falling short from hinting at a sustained long-term advance.

The daily chart supports the longer-term view, at least as long as the pair remains below the 1.1500 area. The 100-SMA stands around the aforementioned Fibonacci resistance level, reinforcing the strength of the 1.1500 price zone. Technical indicators have lost their bullish strength after nearing overbought conditions. More interestingly, the last two daily candles show long upward wicks, hinting at buying exhaustion.

Should the pair take out the 1.1500 resistance area, the bullish case will become more evident. The next resistance price zone and probable bullish target will come in at 1.1570/80, while once above the latter, a full retracement towards 1.1691 seems likely. 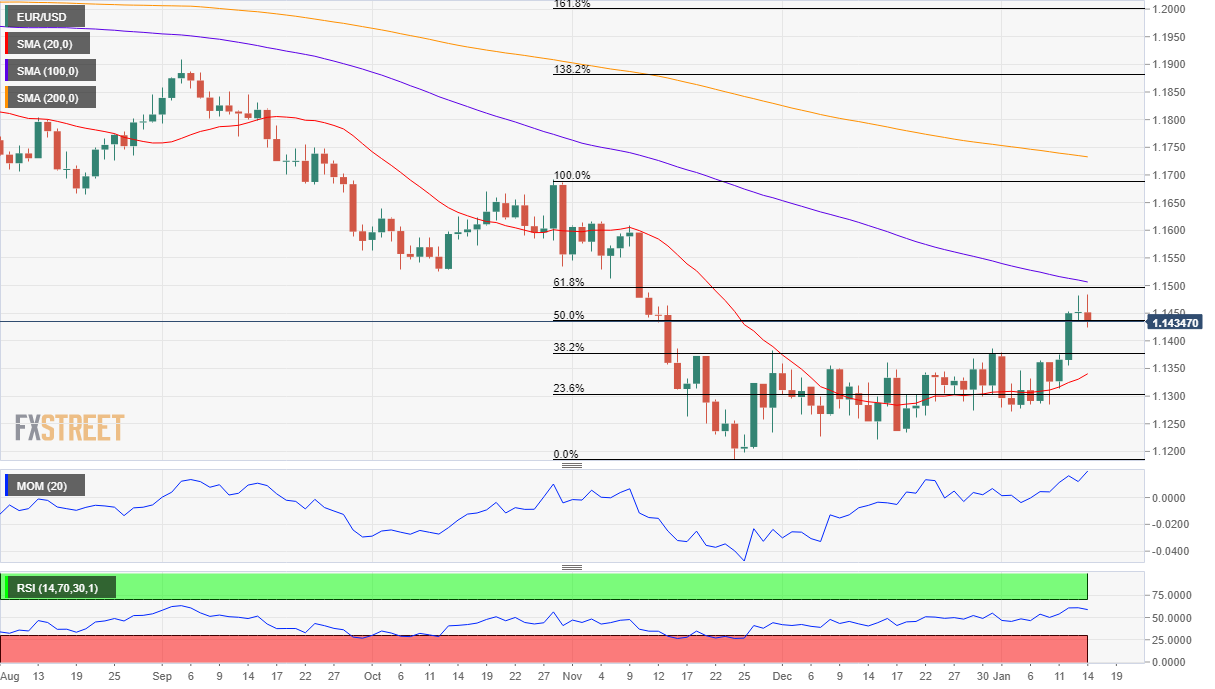 The FXStreet Forecast Poll shows that 75% of the polled experts are looking for a bullish extension in the near term, although 77% of them bet for lower levels in the one-month view. In the quarterly perspective, bulls account for 22% while those betting on a downward move are at 69%. Overall, it seems that speculative interest is seeing the current advance as a due correction, but keep looking to buy the greenback in the long term.

In the Overview chart, the near term moving average head firmly higher, partially distorted by some extremely bullish bets. The positive momentum fades in the monthly perspective, while the longer-term moving average is directionless, with most targets accumulating 1.0900 and 1.1300.

Gold Weekly Forecast: Bulls to take action with a break above $1,830