The AUD/USD pair built on this week's goodish bounce from sub-0.7600 levels and gained some follow-through traction for the third consecutive session on Thursday. The momentum pushed the pair to four-week tops and was sponsored by sustained US dollar selling through the first half of the trading action. The yield on the benchmark 10-year US government bond fell sharply to a one-month low amid expectations that the Fed will keep interest rates near zero levels for a longer period. This, in turn, was seen as a key factor that dragged the key USD Index to near one-month lows.

Bulls seemed unaffected by a modest USD rebound following the release of upbeat US macro data. The Commerce Department reported that Retail Sales surged 9.8% in March – marking the best figure since May 2020. Adding to this, the closely watched Retail Sales Control Group, which has a larger impact on US GDP, increased 6.9% during the reported month. Separately, regional manufacturing indices and Weekly Jobless Claims also came in better than market expectations. The data indicated that the recovery is well on track, which, in turn, provided a much-needed respite to the USD bulls.

The pair finally settled near the top boundary of its daily trading range but struggled to capitalize on the move, instead witnessed some selling during the Asian session on Friday. China reported a sharp acceleration in economic growth during the first quarter of 2021. The reading, however, fell short of market expectations and was accompanied by disappointing Industrial Production data. Mixed data from the world's second-largest economy seemed to be the only factor that exerted some pressure on the China-proxy Australian dollar. That said, the prevalent risk-on mood capped the safe-haven USD and helped limit losses for the perceived riskier aussie, at least for the time being.

The pair now seems to have stabilized just below mid-0.7700s and remains at the mercy of the broader market risk sentiment/USD price dynamics. Market participants now look forward to second-tier US data for some trading impetus later during the early North American session. The US economic docket features the release of housing market data – Building Permits and Housing Starts – and prelim  Michigan Consumer Sentiment Index. This, along with the US bond yields might influence the USD and produce some meaningful trading opportunities on the last day of the week.

From a technical perspective, the pair this week confirmed a bullish break through a three-week-old trading range. A subsequent move beyond the 0.7700 mark reaffirmed the breakout and has set the stage for additional gains. With technical indicators on the daily chart gradually moving into the positive territory, bulls might now look for a move beyond the overnight swing highs, around the 0.7760 region, towards reclaiming the 0.7800 mark. The next relevant resistance is pegged near the 0.7835 supply zone ahead of March monthly tops, around mid-0.7800s.

On the flip side, the 0.7700 round-figure mark should protect the immediate downside. This is followed by the trading range breakpoint, around the 0.7765-60 region. Failure to defend the mentioned support levels might negate the bullish outlook and prompt some technical selling. The pair might then accelerate the slide back towards the 0.7600 mark en-route the 0.7585-80 support zone. Some follow-through selling will be seen as a fresh trigger for bearish traders and expose YTD lows, around the 0.7530 region and the key 0.7500 psychological mark. 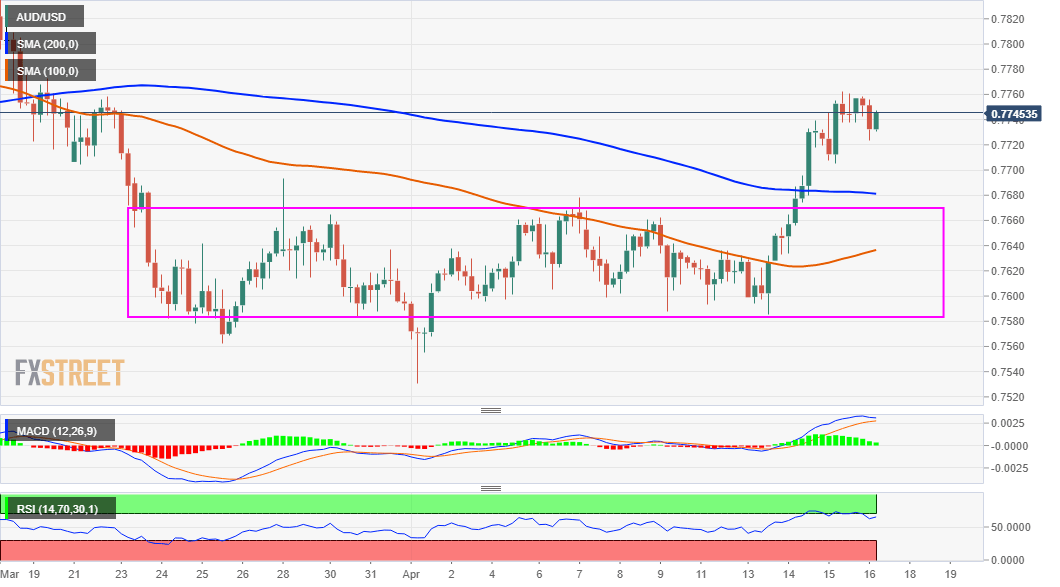