Trades must be entered between 8am New York time Monday until 5pm Tokyo time Tuesday.

I wrote last Thursday that the Australian Dollar was very weak at the time but that the area between about 0.7050 and 0.6985 was an area of strong long-term support, so I thought that we were likely to see a hard struggle here over the short-term between bulls and bears, which would probably make this currency pair difficult to trade.

This was a fairly good call, as although the price fell quite cleanly that day, it never got below 0.7000 and recovered to again test the 0.7050 area.

The picture now seems to be more bearish, as we have the price touching and rejecting to the pip the long-term bearish trend line shown in the price chart below, which is also very confluent with this area of key resistance at approximately 0.7050. However, we have support very close by at 0.7039 although this level does not look particularly reliable. The lower level at 0.7027 looks more likely to be strong.

A break below 0.7025 should see a further fall to at least 0.7000, but in the unlikely event that the price can get established above 0.7066 later, then that would be a very bullish sign.

Action is congested, so it may be wise to avoid trading this pair today. 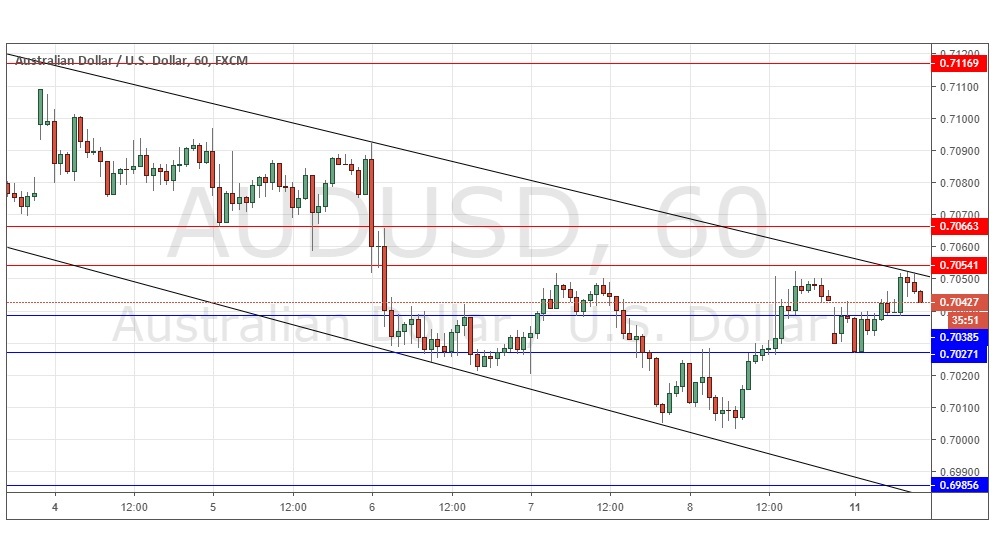 There is nothing of high importance due today concerning the AUD. Regarding the USD, there will be a release of Retail Sales data at 1:30pm London time followed at 1:00am by a minor speech from the Chair of the Federal Reserve.