The Australian dollar posted a nice come back this week but would it last? which are the reasons behind the recovery from yearly lows? The market turned against the greenback, that's it. Partially, because the greenback´s rally was quite overstretched, and speculative interest was looking for a reason to take some profits out. Headlines indicating that US officers were proposing a new round of trade talks with China before taking the decision of implementing additional tariffs on imports from the country, provided such reason. The American currency came under strong selling pressure late Wednesday, while Australian employment data, released early Thursday, further underpinned the pair.

According to the official release, Australia added 44,000 new jobs in August, largely beating the market's forecast of 15,000. 33,700 of those were in full-time positions. The unemployment rate remained steady at 5.3%, despite the participation rate rose by more-than-expected, up to 65.7%. More relevant, the underutilization rate fell to 13.4%, the lowest level in over five years, this last an encouraging sign of future wage growth. On balance, employment indicators continue to signal further improvement ahead, finally some encouraging news coming from the sector.

Risk appetite triggered by the mentioned news suggesting easing trade tension prevailed through Thursday, although US President Trump cooled it down, tweeting "we are under no pressure to make a deal with China, they are under pressure to make a deal with us. Our markets are surging, theirs are collapsing. We will soon be taking in Billions in Tariffs & making products at home. If we meet, we meet?". The good mood deteriorated further Friday on a report indicating that the UK Labour Party is set to vote against the Brexit deal. Not a surprise, but surely, another bump in the road.

The upcoming week the RBA will release the minutes of its latest meeting and Westpac will release August Leading Index, with nothing else of relevance coming from the data front, leaving the pair in the hands of trade war's headlines.

The AUD/USD pair is poised to close the week with solid gains, its largest weekly advance since early April but technically, the long-term picture suggest the latest advance remains as a mere correction. In the weekly chart, the pair remains way below all of its moving averages, with the 20 SMA maintaining a strong bearish slope some 250 pips above the current level. Technical indicators in the mentioned chart remain at monthly lows, with the RSI aiming to leave the oversold territory, hardly enough to confirm a bottom.

In the daily chart, the pair retreated for a second consecutive day from a bearish 20 SMA, while, despite correcting oversold conditions, technical indicators remain well into negative territory, with the RSI already gaining downward traction, now at 43. The chart also shows that the pair faltered at the 50% retracement of its latest decline, and is now trading a handful of pips below the 38.2% retracement of the same decline. The pair has an immediate support around 0.7150, with a break below it exposing the yearly low at 0.7085, lately followed by 0.7000. The pair would need to surpass the 0.7250 level to become a bit more attractive to bulls, with next resistances coming at 0.7310 and the 0.7350/60 region. 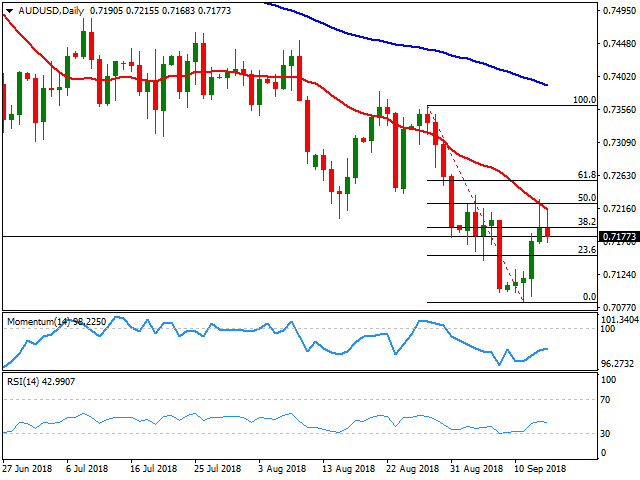 The mood toward the AUD/USD pair is bullish, according to the FXStreet Forecast Poll, in the three time-frames under study, as it was last week, although this time, seems to be a bit more of a basis for such optimism. The average targets are higher in all of the cases by some 100 pips, although the 0.7250 area is a major psychological threshold and the poll reflects so, with average targets in the 1 and  3 months views falling around it.

The Overview chart, however, shows that only in the weekly case, the moving average has bounced modestly. In the monthly chart, the moving average maintains its bearish slow with the largest accumulation of targets at around 0.71. In the longer-term perspective, the wide spread of targets remains, although the balance leans to the downside, despite some optimistic bulls lift the average to 0.7273.