Update 2 February 11: Shares in ZOM continued to surge on Thursday as the frenzy showed no sign of abating. Shares in ZOM are at $2.76 at the time of writing, a gain of 8% on Thursday. ZOM shares had traded up to $3 during Thursday's pre-market.

Update February 11: Shares in ZOM continue their strong run as they closed up 10% on Wednesday. ZOM shares are in sight of record highs. The fact that the recent share offering was increased due to demand was certainly a strong catalyst. However, the valuation is now stretched. ZOM is valued at over $2 billion. The company itself said in an earlier presentation “the diagnostics segment of the global companion animal market is expected to reach $2.8 billion by 2024.” This is the entire market and ZOM is already nearly worth that!

Update: Zomedica Corp( (NYSEAMERICAN:ZOM) has shifted gears and is jumping by some 12% on Wednesday, reaching $2.60. Shares of the Ann Arobr-based firm have been subject to substantial swings after some profit-taking took place earlier on. Equity of the pharma firm leaped from a low of only $0.06 in the past 52-weeks to its current value – staying out of the radar of regulators and RobinHood's managers. It is now eyeing the all-time highs of $2.91. See all the latest hot stocks news. 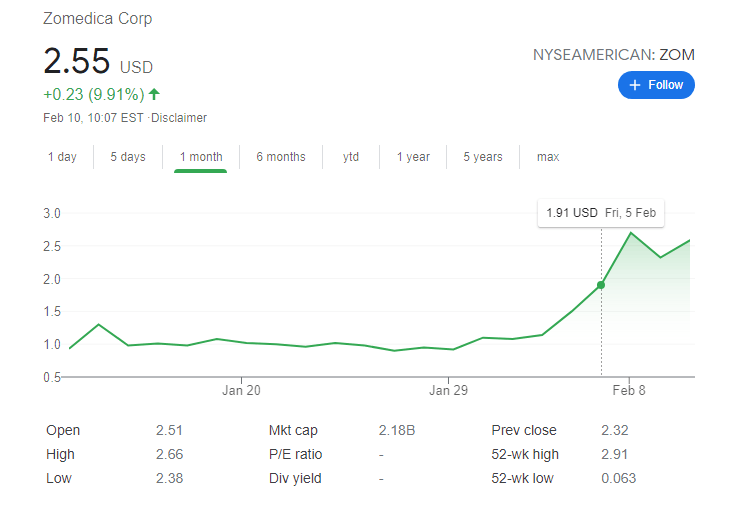 NYSEAMERICAN:ZOM has been on the radar lately as one of the meme stocks that was caught up in the r/WallStreetBets saga that momentarily took over Wall Street. Since the beginning of 2021, Zomedica stock is up over 700% and over 1200% during the past 52-weeks. Of course, these multiples grow larger with penny stocks, but the recent surge is still impressive for a company that has accomplished very little since it began trading in 2016. On Tuesday, Zomedica shares plunged by 14.07% to close the trading session at $2.32.

The catalyst behind the drop in price was Zomedica’s recent stock offering, a common practice by companies who experience a spike in the share price. The underwriter behind Zomedica’s offering valued the veterinary software firm’s shares at $1.90, which represented a 30% decrease from the opening price of $2.70. Long-term investors may be more optimistic though as Zomedica attempts to disrupt a pet healthcare industry that is estimated to be valued at nearly $3 billion by 2024. Stock offerings raise capital that can be used by the company to fund projects and pay down debt. 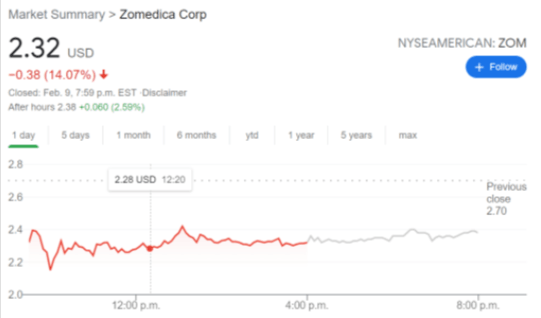 Zomedica is preparing to release its Truforma diagnostic platform across the United States in March. Truforma is designed to perform multiple assay tests on cats and dogs, specifically to diagnose and treat adrenal and thyroid gland issues. The best part about Truforma is it enables veterinarians to keep results in-house, rather than sending them away to external labs which takes time and money to accomplish.