NASDAQ:WKHS has failed to recapture the imaginations of investors after the devastating blow that the company received back in March. The stock has been in a downward spiral ever since and this continued on Wednesday as Workhorse fell by a further 4.4% to close the trading day at $13.20. Shares are trading well below both the 50-day and 200-day moving averages now, and the current price level is a staggering 70% below the 52-week high price of $42.96 that hit as recently as early February of 2021.

Of course the major catalyst for the Workhorse hitting its current freefall was when the company lost out on the USPS delivery truck contract that was awarded to OshKosh Corporation (NYSE:OSK) instead. CEO Duane Hughes recently hinted that although Workhorse lost out on the original contract, there could be an agreement forged down the road and that USPS has not completely ruled out working with Workhorse in the future. While that could be a promising scenario, at this point, investors will need to see it to believe it with Workhorse considering the recent performance of the stock. 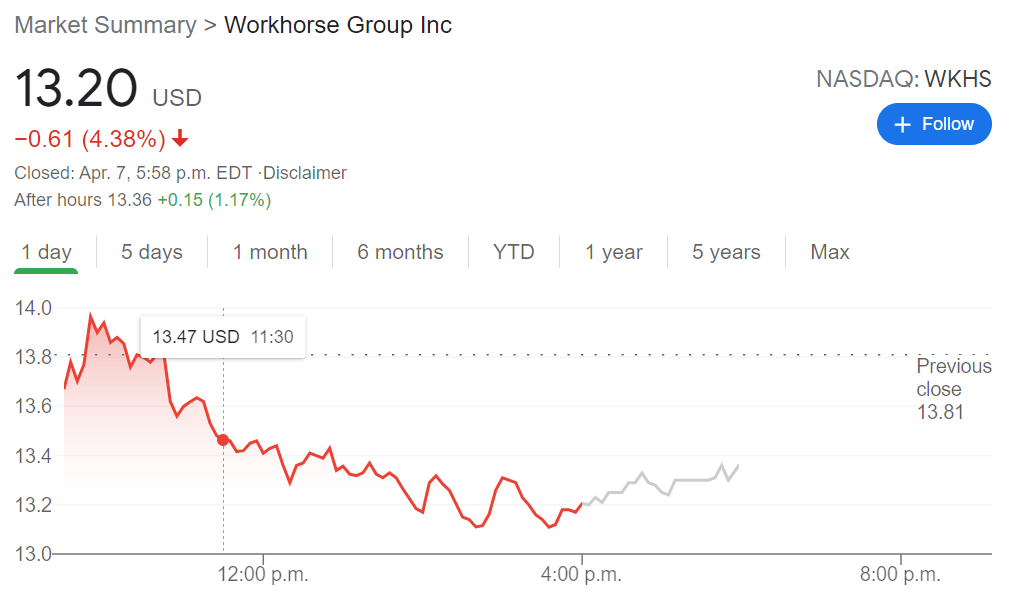 When President Biden successfully took over the White House in early 2021, many investors believed Workhorse would be a main beneficiary, with a push for America-made, electric vehicles. Unfortunately, it hasn’t quite worked out that way for Workhorse. The company did recently report a nice spike in Q4 2020 sales with $652,000 compared to only $3,000 the year before. Workhorse also announced an order backlog of 8,000 vehicles to be manufactured at some point in the near future, so promising days could be ahead, although it has a long road to go before winning back the confidence of investors.

Stop losing your money!
Learn to trade with us!