USD/JPY is on the back foot and is testing 141.00 with a low of 140.90 so far. The US Dollar retreated across the board on Tuesday and remains on the offer in Asia. Investors are looking past worries about China's COVID flare-ups ahead of Wednesday's Federal Open Market Committee Minutes.

Equities and high-beta currencies were favored overnight, putting the US Dollar into a downward spiral. The DXY index, that measure the greenback vs. a basket of currencies was last seen down by over 0.5% near the lows of the day at 107.121. The S&P 500 was closing at its highest level in 2-1/2 months. The Dow Jones Industrial Average rose 397.82 points, or 1.18%, to 34,098.1, the S&P 500 gained 53.64 points, or 1.36%, to 4,003.58 and the Nasdaq Composite added 149.90 points, or 1.36%, to 11,174.41. US stock futures were little changed on Wednesday as investors braced for the latest Federal Reserve meeting minutes that could guide the US rates outlook. Meanwhile, there are prospects of a pivot from the Federal Reserve due to recent cooler-than-expected inflationary data within economic releases, notably the last US Consumer Price Index.

Investors will be parsing minutes from the Fed's November meeting for any clues about the December meeting and the outlook for interest rates thereafter with respect to the terminal rate. WIRP suggests a 50 bp hike on December 14 is still fully priced in, but the swaps are starting to gain price in around 30% odds of a terminal rate near 5.25%, according to analysts at Brown Brothers Harriman. ''Those odds will surely change after we get core PCE December 1, jobs data December 2, PPI December 9, and CPI December 13.  However, it’s worth noting that the US economy continues to grow above trend in Q4 and the market should not underestimate the Fed’s need to tighten further.''

Analysts at TD Securities see the minutes shedding light on the FOMC's deliberations regarding the expected downshift in the pace of rate increases. ''With that said, policymakers will also emphasize that the terminal rate is likely edging higher vs prior expectations as the labor market remains overly tight.''

As per the prior analyses, USDJPY Price Analysis: Bull move in and eye 143.00 area, and USD/JPY Price Analysis: The bears are lurking around daily resistance, 140.50 exposed the pair is at a key juncture as the following analysis will illustrate:

In prior analysis, it was stated that so long as the price stays on the front side of the daily trendline, there would be prospects for a significant bullish correction in the days ahead. 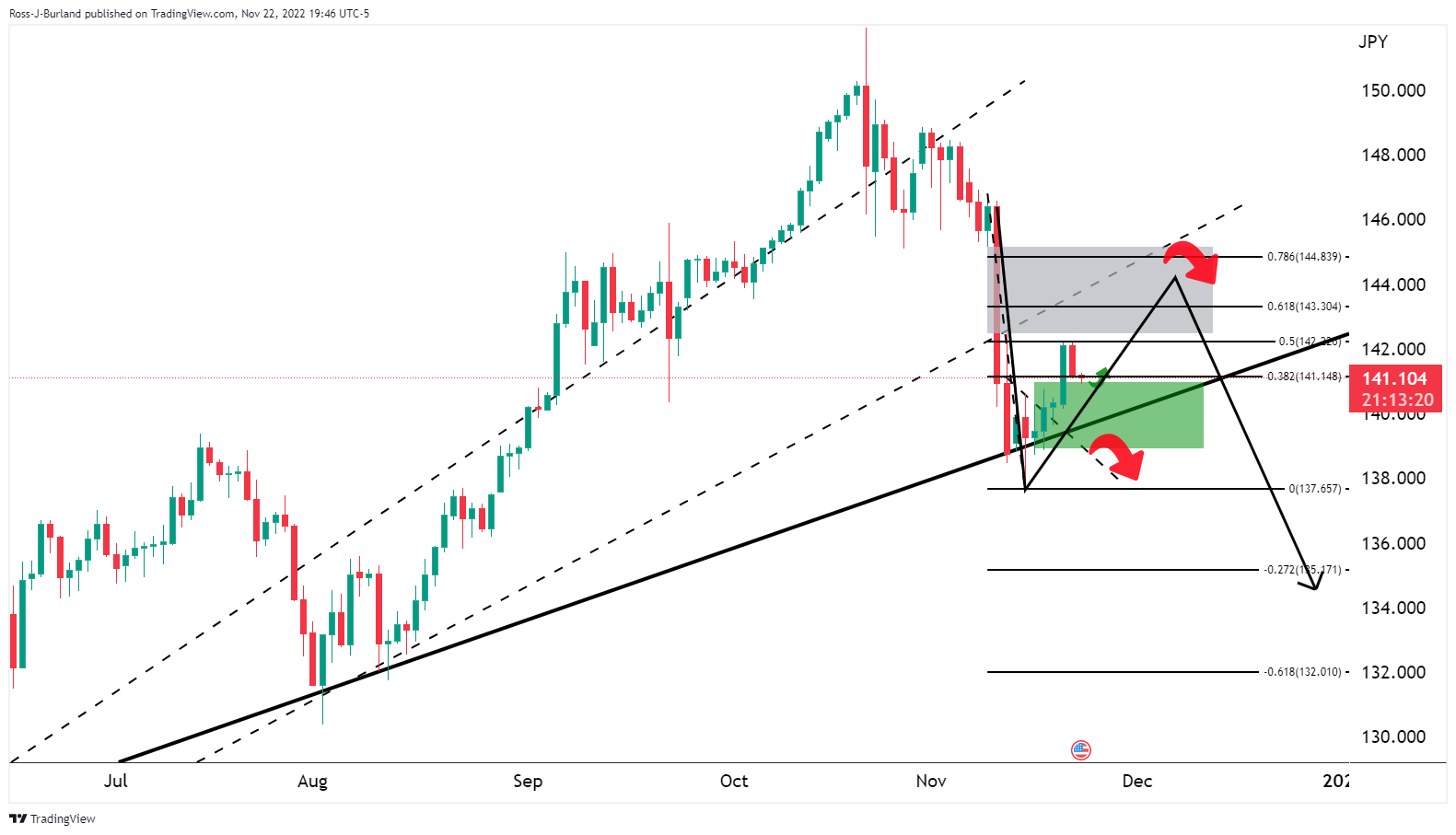 The price is meeting the imbalanced area and has been resisted, so far. 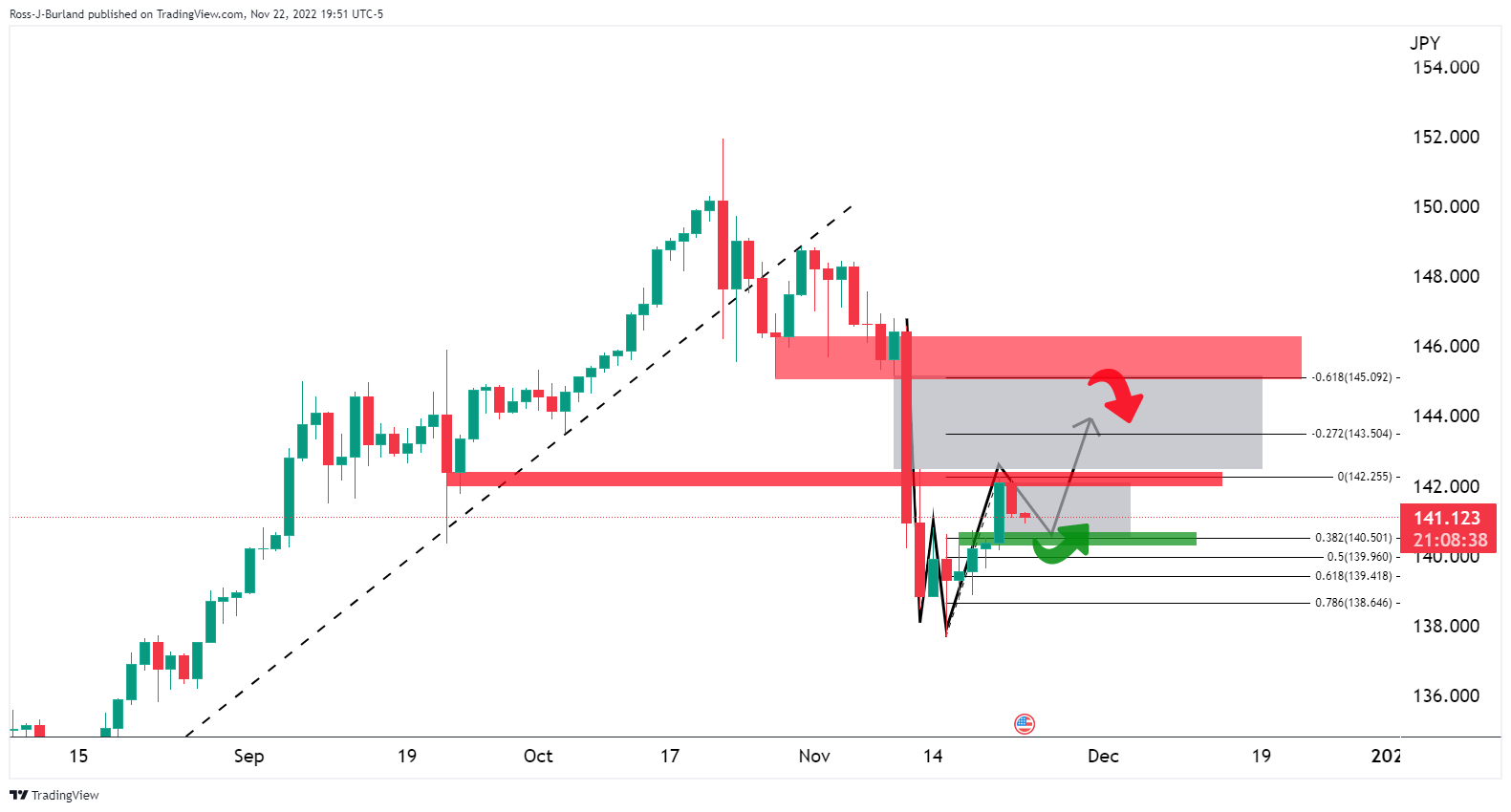 The W-formation is a reversion pattern and if the price holds at the support of the neckline then there will be prospects of a move into the imbalance as illustrated above.