TSLA shares caught a bid on Friday as the company rolled out the powerful 1,020 horsepower Model S Plaid at a live-streamed event on Thursday night from its Freemont factory in California. Elon Musk tweeted, "I love the yoke". Presumably, this referred to the car and not his eggs for breakfast. The vehicle is impressive with a top speed of 200 miles per hour and takes just 15 minutes to charge up to a 187-mile range. Tesla has canceled the Model S Plaid + as it believes the Plaid version is "just so good," according to Elon Musk. Separately on Thursday, Tesla said it will comply with all of China's new data security rules to protect customer rights, according to Reuters.

Tesla shares staged a strongly bullish move on Thursday, closing up nearly two percent. Notably, the point of control was near the top of the day's range. The point of control is based on volume and shows the price level where the most volume occurred. Volume is a powerful indicator of sentiment and what the point of control attempts to show is where the fairest perceived price level was in a given time period. In the case of Tesla (TSLA), being at the top of the day's range shows even bears accepted the price going higher on Thursday. No indicator is perfect, but it attempts to show the most important price levels.

Since December we can see from the chart below the point of control is at $672, which corresponds to our stated resistance at $667. We can also see clearly from the volume profile on the right where the majority of volume has taken place in this time period and why the consolidation 2 zone is exactly that – a consolidation zone. The most volume has taken place at this price range, so it is deemed the fairest price zone. The market will generally move from one consolidation zone to a new consolidation zone. Some catalyst persuaded either bulls or bears that prices are not fair, and they are then pushed to a new zone where more investors or traders see relative value or fairness.

Again from below, we can see the significance of the $539 level. Below this, there is little price discovery or volume until we reach the bear target zone. This means a break of $539 is more likely to accelerate. This may make a useful options play as a sharp drop will see a volatility spike making puts more expensive. $539 and $667 remain the key pivot points, but with Thursday's strong performance, the point of control being to the top of the daily range and TSLA retaking the 9-day moving average give more credence to the bullish case. As ever this is a battle zone or fair zone with the 200-day moving average further adding to the importance. A breakout will come eventually. 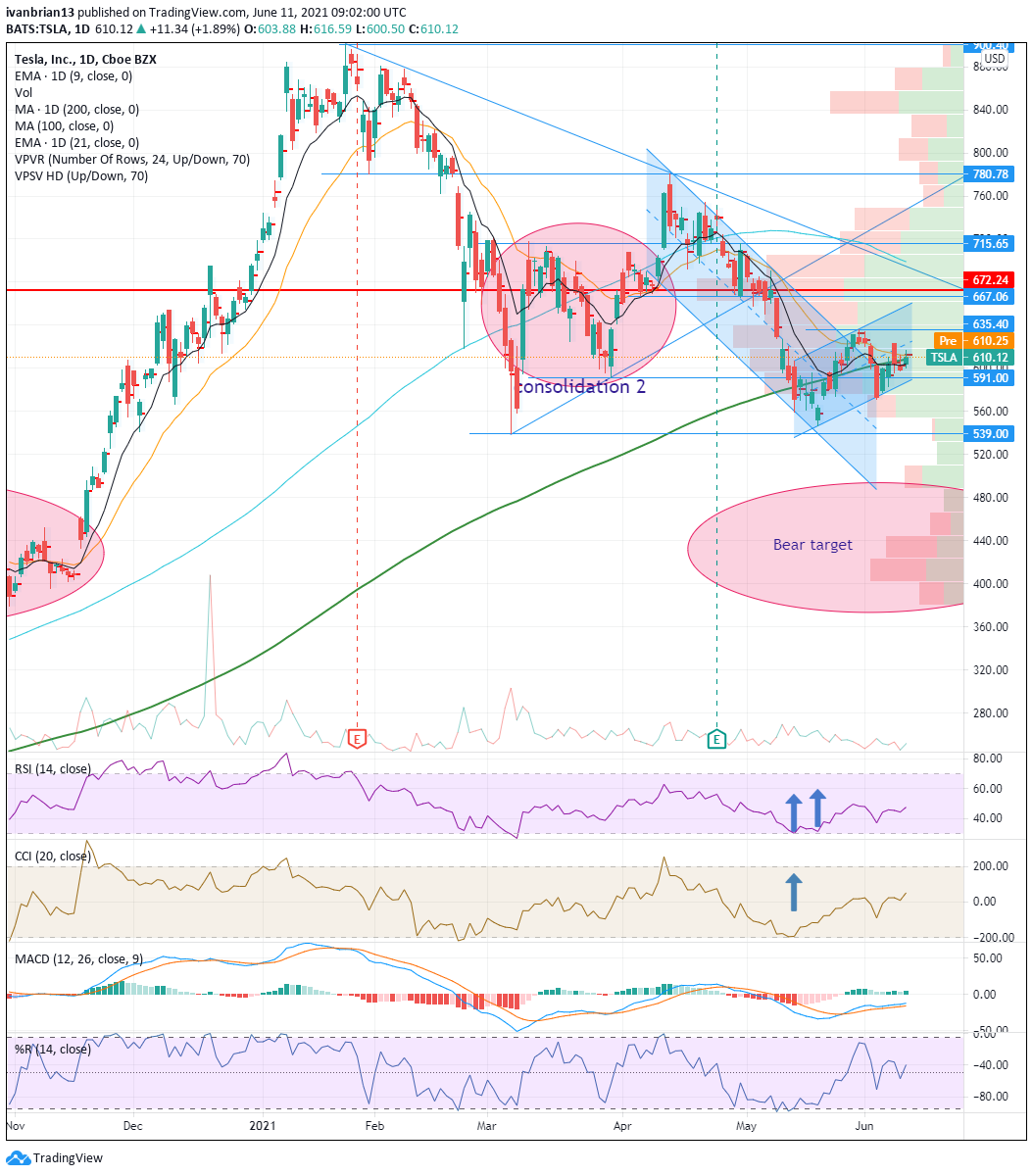