Silver price is recovering some ground as Wall Street closes with substantial losses. Market sentiment continues to deteriorate as US Fed policymakers emphasize the need for more rate hikes, even if it spurs a deceleration in the economy. At the time of writing, the XAG/USD is trading at $18.38 a troy ounce after hitting a daily high at $18.78, up by 0.38%.

During the day, the XAG/USD began trading near the day’s lows before rallying to the daily high. However, as US Treasury bond yields, particularly the 10-year benchmark note rate, knocked on the 4% threshold, investors seeking safety bought the greenback, a headwind for the white metal.

Fed officials crossing newswires during the day reinforced the central bank’s stance. St. Louis Fed President James Bullard said he expects the Federal funds rate (FFR) to edge towards the 4.50% threshold. At the same time, his colleague and Chicago’s Fed President, Charles Evans, estimates the FFR to end at around the 4.50/4.75% mark.

Later, the Minnesota Fed President Neil Kashkari, in a Wall Street Journal interview, said that “There’s a lot of tightening in the pipeline” and added that even though there are risks of overdoing, “we are moving at an appropriately aggressive pace,” Kashkari said. Of late, the Philadelphia Fed President Patrick Harket said, “We will do what it takes to get inflation under control.” If there is a recession, it would be a shallow one.

Data-wise, the US economic calendar featured August’s Durable Good Orders, which contracted 0.2% but were better than the 0.3% shrinkage estimated, while New Home Sales for the same period jumped by 0.685M, exceeding forecasts of 0.5M.

Later, the CB Consumer Confidence improved in September for the second consecutive month, up at 108 vs. forecasts of 104.6.

Given the abovementioned fundamental backdrop, the white metal price is clinging to its early gains but well below the daily highs. Failure to reclaim the 20-day EMA at around $18.83 a troy ounce triggered sell orders, while the Relative Strength Index (RSI) is still aiming downwards, further cementing the XAG/USD downward bias. If XAG/USD closes below yesterday’s low at $18.32, that could open the door for further losses, exposing the $18.00 figure ahead of the 2022 year-to-date low at $17.56. 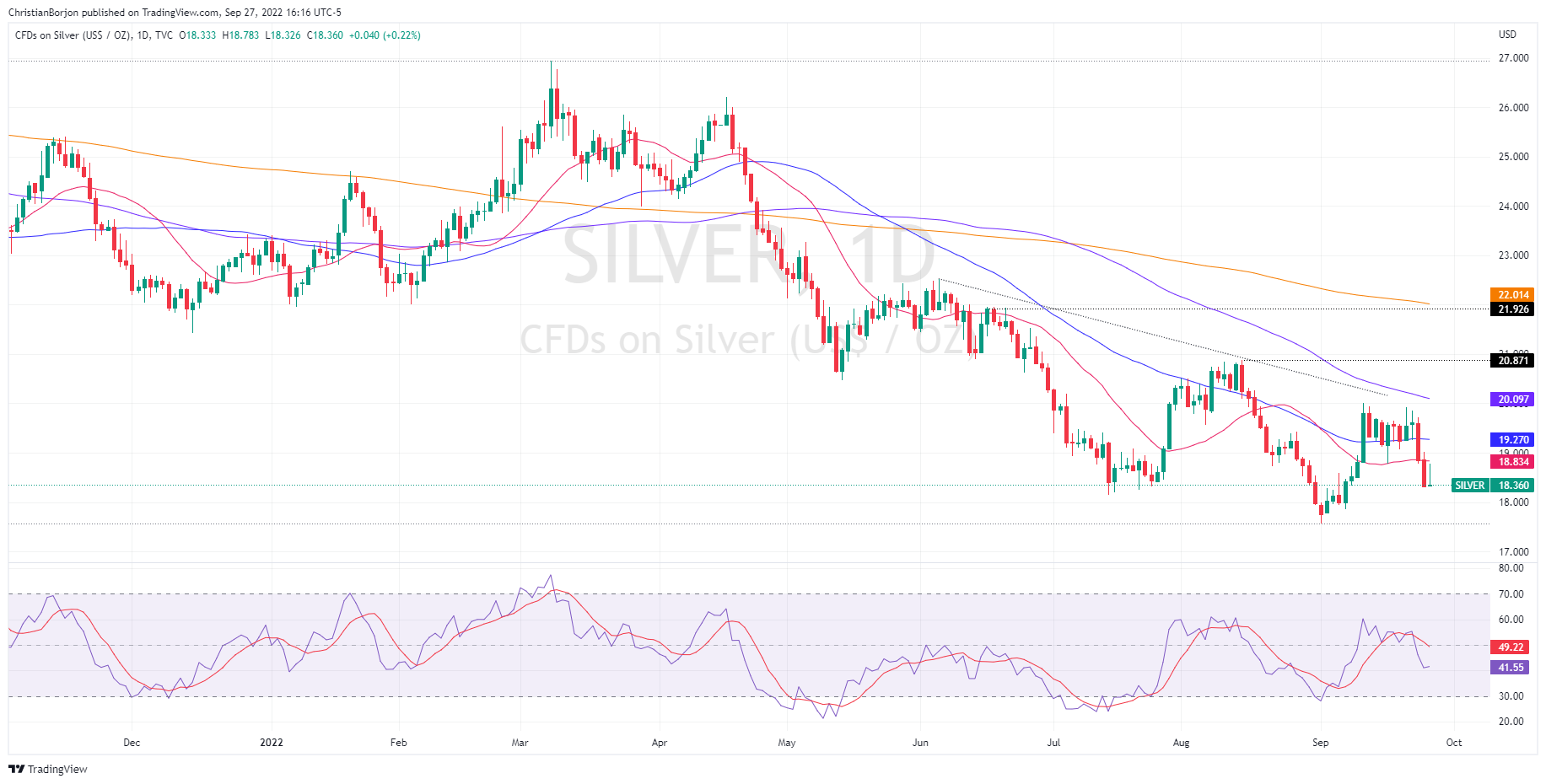