Silver (XAG/USD) lacked any firm directional bias on Thursday and seesawed between tepid gains/minor losses, around the $26.00 mark through the early European session.

The white metal, so far, has managed to hold above the multi-week lows touched in the previous day and showed some resilience below a short-term ascending trend-line. The mentioned trend-line extends from November 2020 swing lows, or sub-$22.00 levels, which if broken decisively will be seen as a fresh trigger for bearish traders.

Given that the XAG/USD this week failed to find acceptance above the $27.00 mark, the subsequent selling supports prospects for an eventual break through the mentioned support. The negative outlook is reinforced by the fact that technical indicators on the daily chart have just started drifting into the bearish territory.

Hence, some follow-through weakness towards intermediate support near the $24.45-40 region, en-route the key $25.00 psychological mark, remains a distinct possibility. The downward trajectory could further get extended and drag the XAG/USD towards the next relevant support around the $24.75-70 horizontal zone.

On the flip side, any attempted recovery towards the $26.30-35 region might still be seen as a selling opportunity. This is followed by the $26.75-80 supply zone, which should cap the upside for silver. That said, a sustained strength beyond, leading to a subsequent break through the $27.00 mark will negate the bearish outlook. 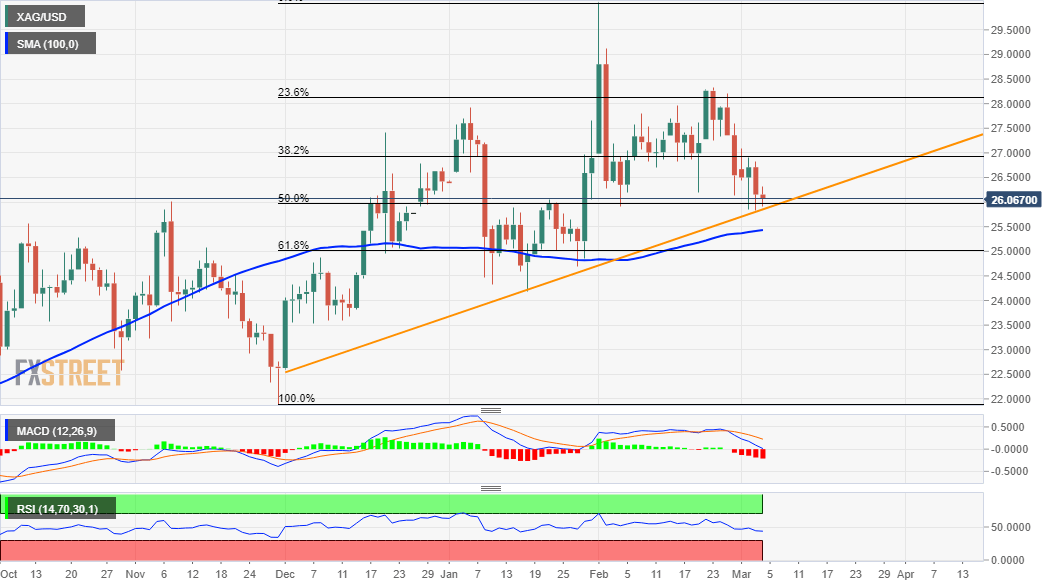 EUR/USD pressures this week high at 1.2079 after the EU services sector moved back into expansion territory according to Markit, the first time since August.

Upbeat UK data fell short of boosting the pound, hurt by Brexit jitters in Ireland. US macroeconomic figures making the difference in the dollar’s favor.

XAU/USD drops below $1,780 area as US T-bond yields rebound

Gold lost its traction after climbing toward $1,800 on Friday. 10-year US Treasury bond yield is up nearly 2%. Latest PMI data from US underlined strong price pressures.