LSE:RR has continued to be a volatile stock as the U.K. continues to battle its COVID-19 outbreak heading into 2021. News of potential COVID-19 vaccine doses being distributed to the U.K.’s most vulnerable citizens by April of next year has spiked investor interest in Rolls-Royce, which is also one of the leading manufacturers of jet engines for commercial aircraft. Reopening air travel can only mean good things for Rolls-Royce, similar to the rejuvenated stock performance of American counterpart Boeing (NYSE:BA).

Last week, U.K. Prime Minister Boris Johnson announced that the country would be shifting its focus away from petrol, towards clean energy and electric vehicles. The move would lead to a ban on fossil fuel automobiles by the year 2030, a move that has been popular in other countries around the world, including the United States. Rolls-Royce has already started planning for the future as earlier in the year, its CEO did mention that the luxury car brand would have no choice but to move to electric vehicles by the end of the decade. 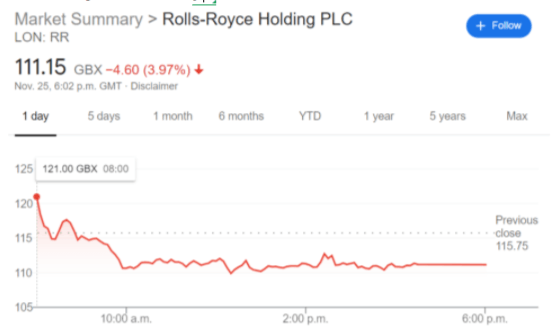 With several consecutive weeks now of COVID-19 vaccine news, Rolls-Royce should be seeing better days ahead as vaccine doses should begin to be available in the new year. The popular brand remains one of the most traded stocks on the Hargreaves Lansdown trading platform, as investors have learned to buy and sell the volatility that has followed Rolls-Royce throughout the year.