NASDAQ:LCID is well on its way to production and vehicle deliveries, but when that happens is still a mystery to investors. Until then, expect Lucid to continue to trade alongside the broader electric vehicle sector, just as it has done so far this week. On Tuesday, shares of LCID fell a further 1.18% as the stock closed the trading day at $22.56. The broader markets were down in general, with the NASDAQ tumbling by 0.9% and the DOW shedding nearly 300 basis points on weak July retail numbers and a lower than expected same store sales report from Home Depot (NYSE:HD).

Included in that July retail decline was a sharp downturn in auto sales. Overall retail sales in the U.S. were down 1.1% in the month of July which far outpaced the consensus analyst estimate of a 0.3% decline. The difference in outcomes raised concerns over rising cases of COVID-19 Delta Variant cases, as well as fresh outbreaks abroad in countries like China.  Ford (NYSE:F) and General Motors (NYSE:GM) fell by 3.49% and 4.68% respectively on the news. 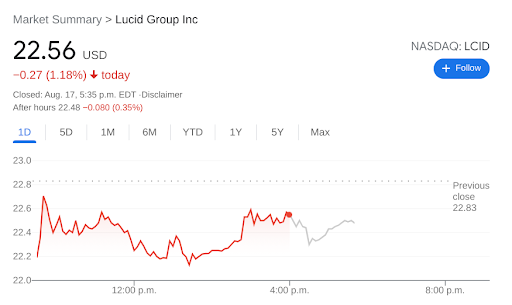 Industry leader Tesla (NASDAQ:TSLA) saw another down day after the U.S. government reported it is starting an official investigation into the company’s driver-assist systems. On Tuesday, shares of TSLA fell a further 2.98% as a Bernstein analyst gave a bearish outlook on Tesla, reiterating his $300 price target for the stock.