The price of the yellow metal has so far been held up sideways in a $1,897.91-$1,911.35 range on Tuesday, currently bid up some 0.32%. The price had been slowly chipping away to the downside below resistance and within a bearish environment on the weekly chart.

However, the price is caught up in fundamentals which are making for s gruelling swing trade for the bears, positioned for a downside continuation. Gold could be in what is now a wait-and-see mode ahead of US elections on the 3rd of November. Markets are evaluating the potential for a fiscal stimulus deal to be struck in the lame-duck session which hinges on the election results.

Gold is likely to win this election

Trump and Biden debated for the second and last time in this campaign. So, who will win, and why gold is likely to be the biggest winner of them all?

President Donald Trump and Democratic challenger Joe Biden met for the second and the last debate before the elections. Thankfully, this time things were less chaotic and with far fewer interruptions and insults. Perhaps Trump has acknowledged that his aggressive behavior was a liability and decided to change his approach – especially since this was his final opportunity to alter the presidential campaign dynamics. 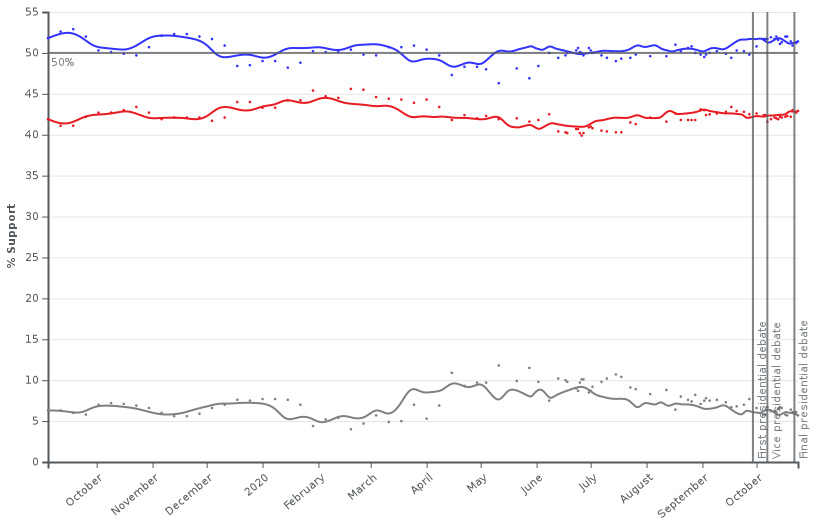 Gold pulled back from weekly highs and dropped to $1823/oz, reaching a fresh daily low. It then rebounded, and as of writing, it trades at $1830, around the same level it closed on Wednesday.