American indices closed the trading session on Monday with 7% growth on SP500 and 7.7% on Dow Jones. Both indices closed above the levels of the previous rebound at the end of March, further fueling the growth of foreign bourses at the start of trading on Tuesday.

The positives come from several directions at once. For the second day in a row, the number of new COVID-19 infections in the world is decreasing. In most European countries, the trend for reduction is confirmed. This is evidence that quarantine measures have the right effect by knocking down the spreading wave.

At the same time, the authorities of the most affected countries are not tired to declare new funds to fight the consequences. Italy has announced a new package of measures worth 400 billion euros to support small and medium businesses, increasing the overall package to more than 800 billion (about 50% of GDP). US lawmakers are considering another package "for at least $1 trillion" in addition to the $2.6 trillion. Federal Reserve said it would allow banks to cash out loans issued under the program of assistance to small and medium businesses - a way to put money into the economy quickly.

These measures reduce the pressure on the markets, causing some weakening of the dollar. Of course, it's too early to try to estimate whose incentives will be larger and faster to enter the economy. The answer to this question will help to understand the future trends of the currency market. Initially, the side, whose "supply" of currency will increase more strongly will feel worse. Read more...

1671/72 does not appear to be a strong resistance levels so be ready to buy a break higher targeting 1686/88 & is more resistance at the bull market high 1700/02. A break above here is obviously positive. Read more...

The commodity failed to capitalize on its early uptick to the $1674 region, or near four-week tops and witnessed a modest intraday pullback. A further improvement in the global risk sentiment, as depicted by some strong follow-through positive move in the equity markets, was seen exerting some pressure on traditional safe-haven assets, including gold.

The risk-on mood was supported by the latest optimism over falling number of COVID-19 cases from the United States, Italy and Spain. This was further reinforced by a strong rally in the US equity markets, which further contributed towards driving flows away from the non-yielding yellow metal and contributed to the intraday slide.

Meanwhile, a weaker tone surrounding the US dollar, which tends to undermine demand for the dollar-denominated, might turn out to be the only factor that might help limit any deeper losses. Hence, it will be prudent to wait for some strong follow-through selling before confirming that the recent rally might have already run out of the steam. Read more... 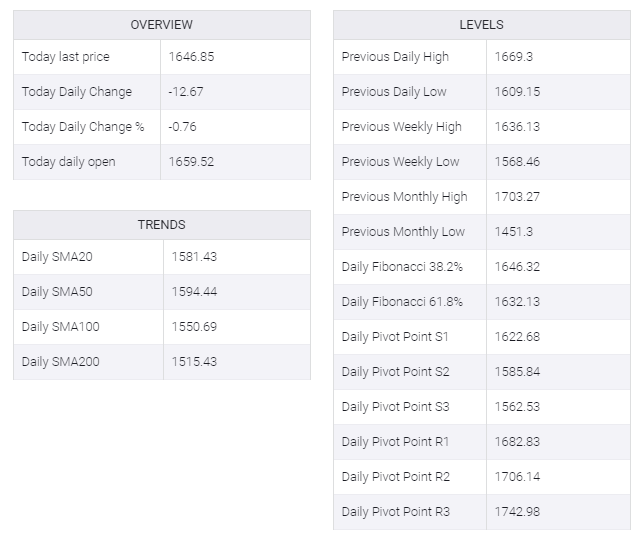