Gold spot (XAUUSD) bounces off weekly lows near $1816, recovering some ground in the week, reclaiming above the $1825 mark courtesy of a soft US Dollar amidst a trading day with upbeat market sentiment and elevated US Treasury yields. At the time of writing, XAUUSD is trading at $1826.56, up 0.23%.

Sentiment improved despite Thursday’s dismal US S&P Global PMI, which showed the US economy is slowing. US recession fears increased after Friday’s University of Michigan Consumer Sentiment on its June final reading plunged to 50. However, inflation expectations, unveiled in the same report, were lowered, which began to be priced in by market players, who backpedaled an aggressive Fed, now expecting the Federal funds rate (FFR) to top around 3.50%.

Before Wall Street opened, the St. Louis Fed President James Bullard spoke at a panel alongside the RBA’s Governor Philip Lowe. He said that fears of a US recession are overblown and commented that the US would be fine. He added that tightening policy will slow down the economy to a trend pace of growth and expects the need to move the FFR near 3.50%.

At the time of writing, the San Francisco Fed President Mary Daly is crossing wires. She said the Fed doesn’t need to think about the endpoint of the balance sheet yet, and added that the central bank would communicate regarding that. Daly’s said that she does not see a recession.

Elsewhere US 10-year TIPS (Treasury Inflation-Protected Securities), a proxy for US Real yields, slumps two bps at 0.556%, a tailwind for the yellow metal that usually benefits from lower Real yields augmenting appetite for precious metals.

Meanwhile, the US 10s-2s yield spread remains positive at 0.071%, though it remains to push towards 0%. A reading below 0% would imply that traders forecast a recession in the US.

XAUUSD is in consolidation, though it remains below the 200-day moving average (DMA) around $1844.79, suggesting that gold bias is neutral-downwards. Also, the Relative Strength Index (RSI) is at bearish territory at 44.87, signaling that selling pressure remains on the non-yielding metal, but the lack of a catalyst that moves the price above/below the range kept it trapped in the $1825-50 area. 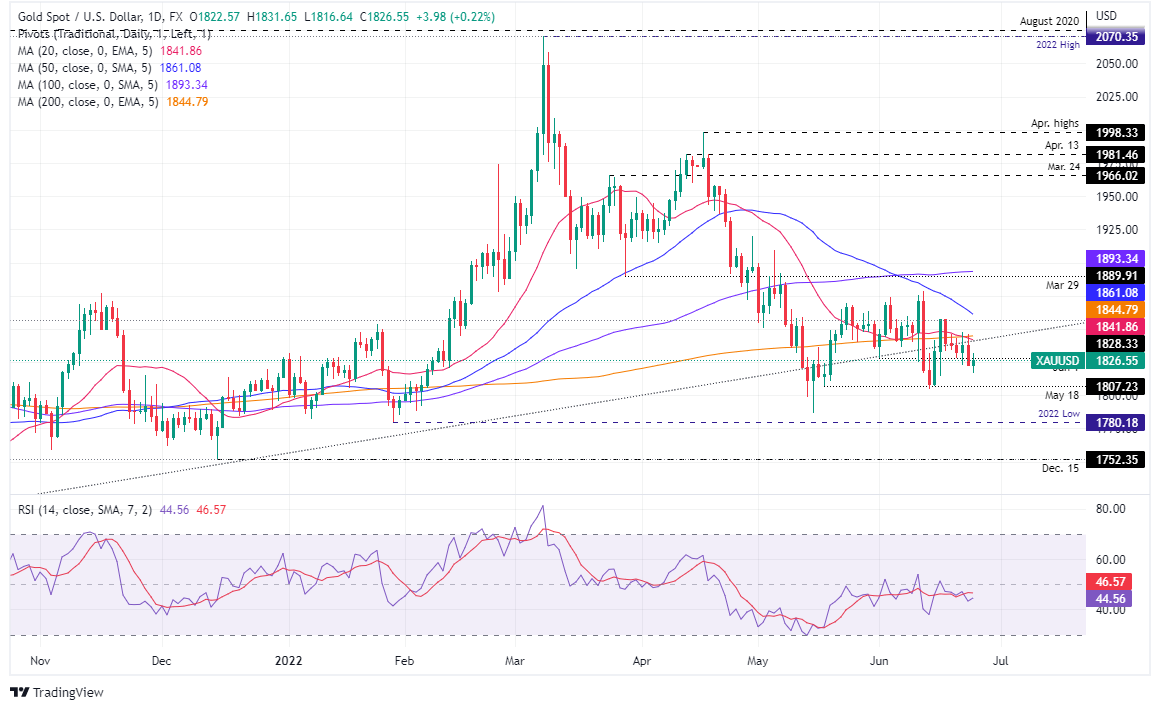