The gold price has rallied at the start of the week in a move that was forecasted in the weekly pre-open analysis here: Gold Price Forecast: XAU/USD bulls eye a 61.8% golden ratio daily target.  At the time of writing, gold is 0.75% higher on the day having travelled from a low of $1,712.04 to a high of $1,735.18 so far, piercing into the 61.8% Fibonacci of the daily bear impulse.

A weaker USD saw commodity markets recover some of the losses at the start of this week and gold has been no exception, despite expectations of another aggressive rate hike by the Federal Reserve next week.

However, a weaker USD has improved investor appetite. US stocks rose along with gold and crude oil futures after midday on Monday, while government bond yields fell with the dollar index. The US 10-year rate slipped 3.262% intraday from 3.346% while the dollar index weakened against a basket of currencies, including the euro, falling 0.8% to 107.81.

With no data released on Monday, the focus is on Tuesday's US Consumer Price Index for August. Core prices likely stayed firm in August, with the series registering another 0.3% MoM gain, analysts at TD Securities expect. ''Our MoM forecasts imply 8.0%/6.0% YoY for total/core prices.''  That would be slower than the 8.5% pace in July.

Markets are seeking further evidence inflation has peaked in the US and the data will be important for the direction of yields, gold and the greenback. However, Federal Reserve officials said last week that more than a few months of consistently lower readings will be needed to assure that price increases have reliably slowed.

Fed officials are in the so-called quiet period through the Sept. 20-21 Federal Open Market Committee meeting. It remains in place until Chair Powell’s post-decision press conference on September 21.  WIRP suggests over 90% odds of a 75 bp hike.

''Overall, we continue to expect that while rates markets appear to be nearing a fair pricing for Fed funds, precious metals' price action is still not consistent with their historical performance when hiking cycles enter into a restrictive rates regime,'' analysts at TD Securities said. ''Indeed, gold and silver prices have tended to display a systematic underperformance when markets expect the real level of the Fed funds rate to rise above the neutral rate, as estimated by Laubach-Williams. We expect continued outflows from money managers and ETF holdings to weigh on prices, which will ultimately raise the pressure on a small number of family offices and proprietary trading shops to capitulate on their complacent length in gold.''

As per the per-open analysis, gold has moved higher into the key 61.8% golden ratio:

(Gold, daily chart: Before and after) 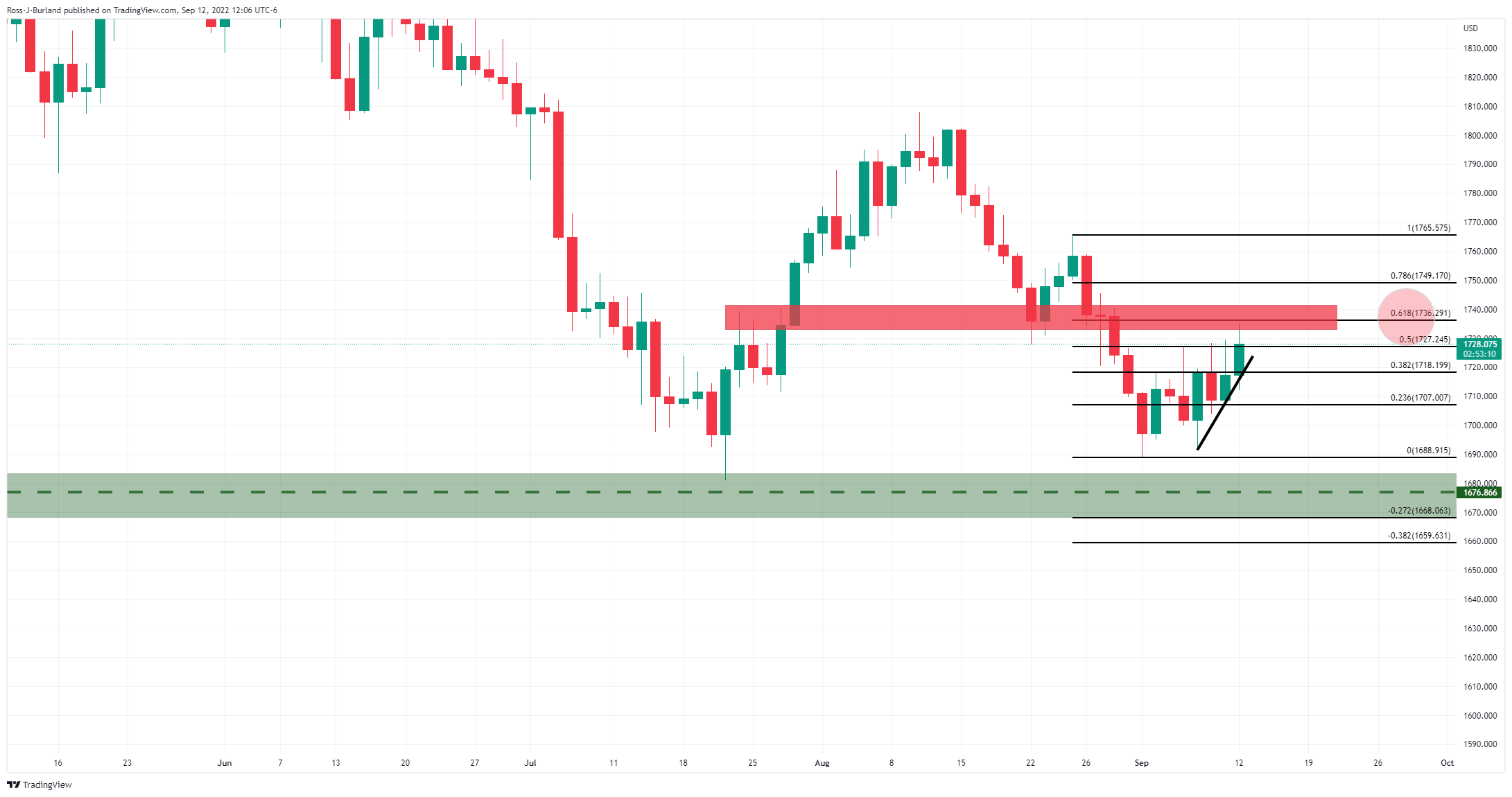 The weekly outlook remains bullish as the price embarks on a test of the 38.2% Fibonacci level with potentially some more fuel left in the tank. There are prospects of a deeper correction towards $1,750 or even as high as the weekly 61.8% ratio near $1,763. However, signs of deceleration at this current confluence Fibo area could lead to a move lower and in any respect, the bears will be keen on a test of the $1,676 lows in due course.

The AUD/USD pair has not responded well to the downbeat monthly Retail Sales data as reported by the Australian Bureau of Statistics. The economic data has landed in negative territory at 0.2% vs. consensus of 0.4% growth and the prior release of 0.6%.