Update: Gold reversed an intraday dip to the $1,758 region and has now moved into the positive territory for the third successive day. The US dollar extended the previous day's retracement slide from the highest level since August 23 and remained on the defensive through the first half of the trading action on Tuesday. This, in turn, was seen as a key factor that provided a modest lift to dollar-denominated commodities, including gold. However, a combination of factors kept a lid on any meaningful upside and warrant some caution before positioning for any further appreciating move.

The risk-on impulse – as depicted by a strong rally in the global equity markets – acted as a headwind for the safe-haven gold. This, along with expectations for an imminent Fed taper announcement, triggered a fresh leg up in the US Treasury bond yields and further collaborated to cap gains for the non-yielding yellow metal. Investors also seemed reluctant to place any aggressive bets, rather preferred to wait for a fresh catalyst from the outcome of a two-day FOMC meeting starting this Tuesday. Hence, it will be prudent to wait for a strong follow-through buying before confirming that the XAU/USD has already bottomed out in the near term.

The Fed is scheduled to announce its decision on Wednesday and is widely anticipated to leave its monetary policy settings unchanged. Hence, investors will look for clues about the likely timing when the Fed would begin rolling back its massive pandemic-era stimulus. This will play a key role in influencing the USD price dynamics and provide a fresh directional impetus to gold.

Previous update: Gold price is consolidating Monday’s rebound, as the bulls turn cautious heading into the two-day FOMC meeting that begins later this Tuesday. Expectations of Fed’s tapering plan remain alive and kicking tempering the mood around gold investors. Meanwhile, easing China's Evergrande scare has led to improvement in the risk sentiment, lifting the US Treasury yields at gold’s expense. However, gold buyers continue to find support from a broad-based US dollar retreat, thanks to the calm market tone.

Gold price halts its recovery mode after the bulls ran into stiff resistance near the $1767-$1768 region, as the six-week lows at $1742 continue to lure the sellers amid hawkish Fed’s expectations and a data-light US docket.

Acceptance above the latter could challenge the range highs near $1768-$1770, which is the intersection of the Fibonacci 38.2% one-week and SMA100 one-hour.

Further up, the SMA5 one-day at $1774 will test the offers on the road to recovery.

Alternatively, if the bulls fail to resist above $1760 support, then a drop towards the confluence of the Fibonacci 38.2% one-day and Bollinger Band one-hour lower at $1757 cannot be ruled out. 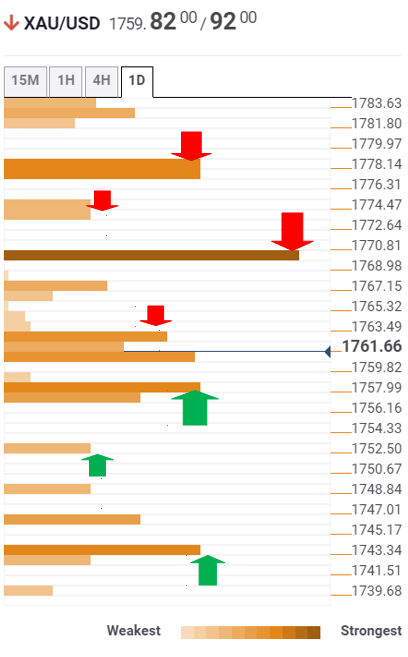