Gold started the week in a relatively calm manner and continued to fluctuate in the previous week’s horizontal channel on Monday. Although the precious metal managed to rise above $1,800 on Tuesday, it came under strong bearish pressure in the second half of the week and fell to its lowest level in a month at $1,745 on Thursday. The XAU/USD pair struggled to stage a convincing rebound ahead of the weekend and closed the second straight week in the negative territory, losing nearly 2%.

On Tuesday, the data published by the US Bureau of Labor Statistics revealed that inflation in the US, as measured by the Consumer Price Index (CPI), edged lower to 5.3% on a yearly basis in August from 5.4% in July as expected. Further details of the report showed that the Core CPI, which excludes volatile food and energy prices, fell to 4%, compared to analysts’ estimate of 4.2%, from 4.3%.

With this print suggesting that the Federal Reserve could opt out to delay the reduction in asset purchases, the greenback started to weaken against its rivals. However, the risk-averse market environment helped the US Dollar Index (DXY) limit its downside and made it difficult for gold to preserve its bullish momentum.

The Fed reported on Wednesday that Industrial Production in August expanded by 0.4%, falling short of the market expectation of 0.5%. On a positive note, the Federal Reserve Bank of New York’s Empire State Manufacturing Index improved sharply to 34.3 in September from 18.3 in August. Although these prints failed to trigger a significant market reaction, rising US Treasury bond yields provided a boost to the USD mid-week.

On Thursday, the US Census Bureau announced that Retail Sales in the US increased by 0.7% in August, beating the market forecast for a contraction of 0.8% by a wide margin. The robust data revived optimism about the US economic recovery regaining traction and allowed the USD to continue to outperform its rivals. Furthermore, the 3% upsurge witnessed in the 10-year US Treasury bond yield put additional weight on XAU/USD’s shoulders, causing the pair to lose than 2% on a daily basis.

Finally, the University of Michigan (UoM) Michigan's Consumer Sentiment Index edged higher to 71 in September's advanced estimate from 70.3 in August. Market participants paid little to no attention to this data and the DXY extended its rally ahead of the weekend. Meanwhile, gold found some demand amid the steep decline seen in the US stocks and closed virtually unchanged on Friday.

The economic docket will not be offering any high-impact data releases on Monday and Tuesday and gold is likely to fluctuate between key technical levels.

On Wednesday, the Federal Reserve will announce monetary policy decisions alongside the updated Summary of Projections following the FOMC’s two-day meeting. Investors will keep a close eye on the dot plot, which reveals policymakers’ rate outlook, and inflation forecasts. More importantly, FOMC Chairman Jerome Powell’s remarks at the press conference will be looked upon for fresh hints regarding the timing of asset tapering.

While speaking at the Jackson Hole Symposium, Powell acknowledged that he thought at the July policy meeting that it would be appropriate to start asset tapering this year. Since then, the disappointing August jobs report, which showed an increase of 235,000 in Nonfarm Payrolls against the market expectation of 750,000, and the dismal consumer sentiment surveys caused investors to reassess the Fed’s tapering prospects. However, this week’s upbeat Retail Sales data makes it hard to guess whether Powell will adopt a cautious tone.

In case Powell unveils that the Fed will start reducing asset purchases before the end of the year, the USD is likely to gather strength and force XAU/USD to turn south. On the other hand, a dovish outlook with the chairman refraining from delivering a tapering timeline could trigger a heavy USD selloff and fuel a gold rally.

On Thursday, the IHS Markit will release the preliminary Manufacturing and Services PMI data for the euro area, the UK and the US. 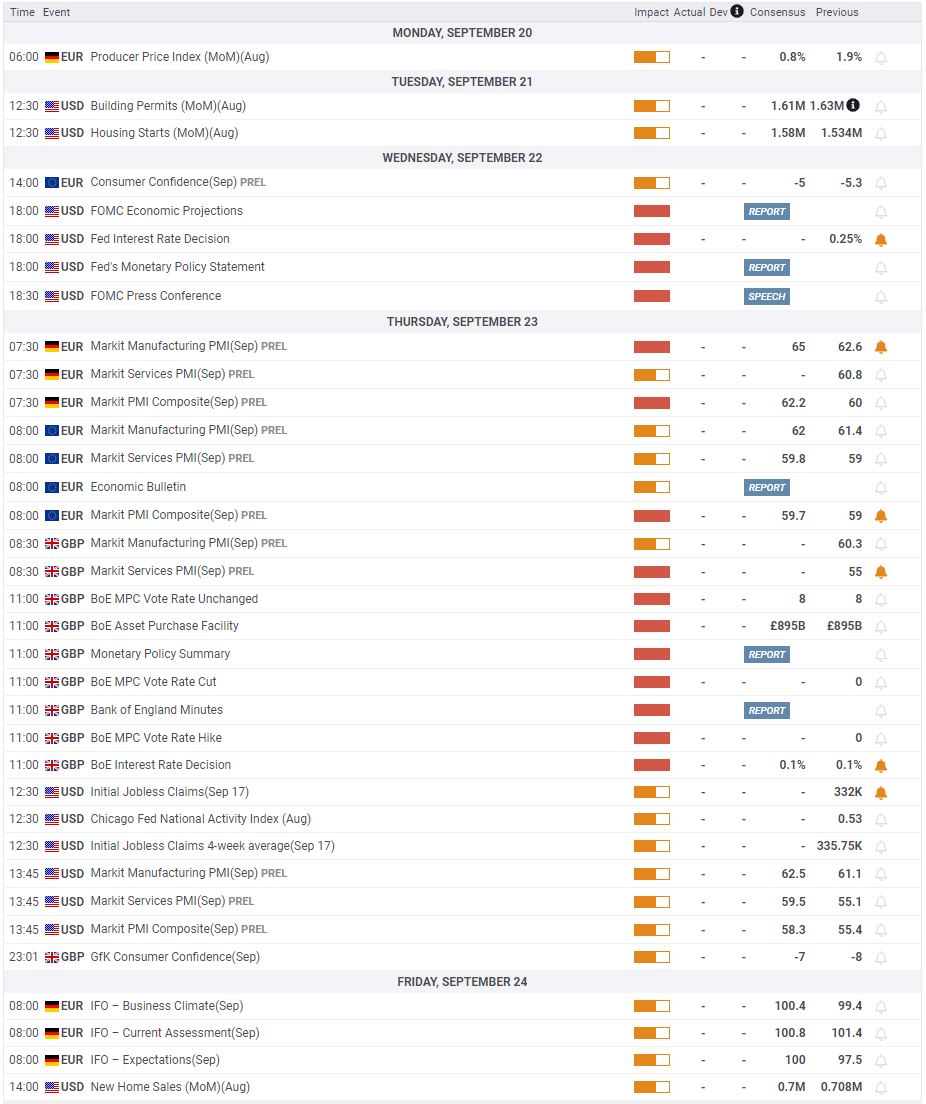 Following Thursday's sharp drop, the Relative Strength Index (RSI) indicator on the daily chart dropped below 40 and moved sideways on Friday, suggesting that XAU/USD has more room on the downside before it becomes technically oversold. A daily close below $1,750 (static level) could open the door for additional losses toward $1,730 (static level) and $1,720 (static level). However, in case the RSI breaks below 30 with such a move, there could be a technical correction before the next leg down. The last time the RSI dropped into the oversold territory on a Monday on August 9, gold gained nearly 3% in the remainder of the week.

Nonetheless, unless the pair makes a daily close above $1,810, where the critical 200-day SMA is located, buyers are unlikely to dominate gold's action. Ahead of that level, $1,770 (Fibonacci 61.8% retracement of April-June uptrend) and $1,800 (psychological level) align as interim resistances.

The FXStreet Forecast Poll paints a mixed picture in the near term with experts splitting up evenly between bullish, bearish and neutral forecasts for gold. Reflecting the indecisiveness, the average target on a one-week view sits at $1,751, around Friday's closing level. Although the one-month view points to a bullish shift, the average forecast of $1,758 suggests that a convincing recovery is not expected. 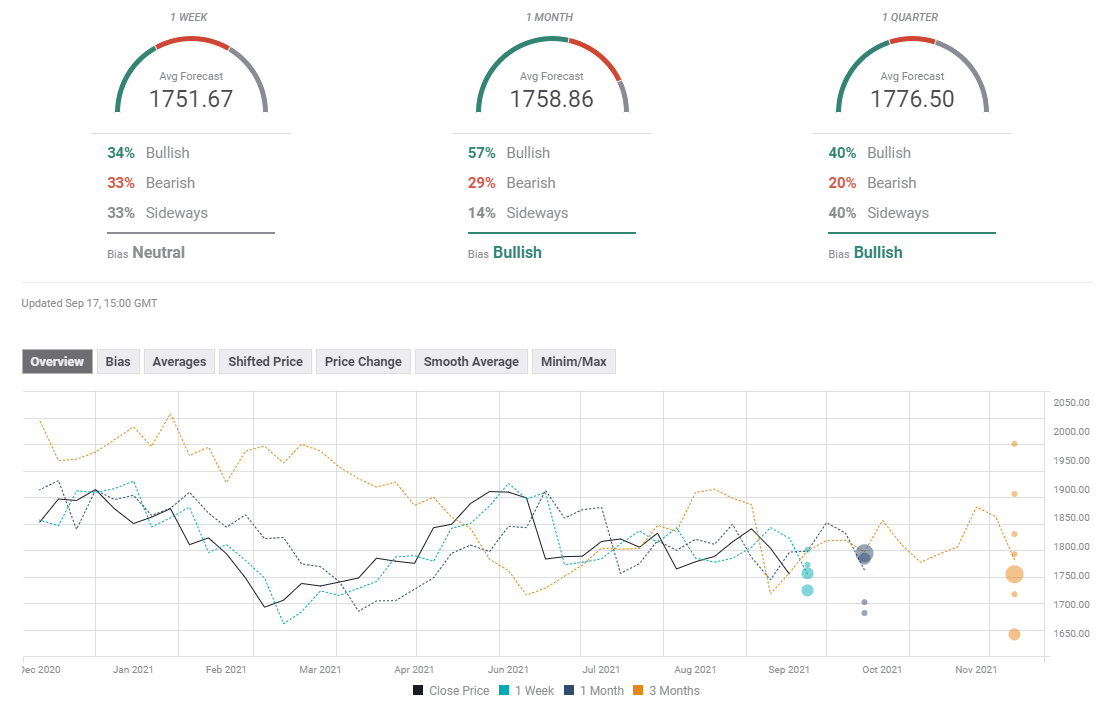